Box Seats To A Siege 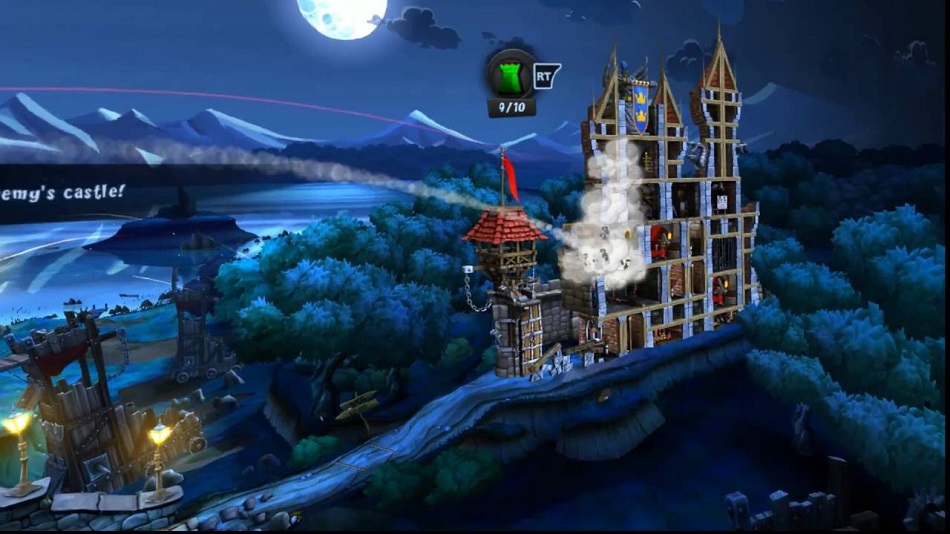 HIGH Watching a boar get into a fight with a giant spider in the background.

LOW Trying to make consistent headshots from a football field away.

To be clear, this is the exact same game as Castlestorm: Definitive Edition, which Sparky liked a little less than I did in his main review. It’s still a hybrid castle-breaking/troop management game set in a brightly-coloured world of Vikings battling Knights, with a surprisingly expansive campaign and truly broad set of weapons, abilities and troops.  Players already familiar with the title shouldn’t come for anything more than a new point of view on already-great game.

So, how does one move Castlestorm into the world of VR? First person ballistas leading to stomach-churning journeys as players are thrown on parabolic arcs into the walls of an enemy castle? No, there’s nothing so ambitious here – it remains a steadfastly 2D experience. No, what the developers have done is pull the camera back and put the player in a choice seat a few hundred feet from the action, allowing them to watch the whole field at once.

I’d say it takes some getting used to, but it’s actually a completely natural way to play. Being able to look around is completely intuitive, with the player free to glance left and right to immediately get a sense of how the two competing castles are faring. Aiming the ballista is also a cinch with the preview arc clearly visible and hovering in midair. It’s actually easier to play on hard difficulty now since being able to watch the full flight of every shot makes aiming without a reticle considerably simpler. 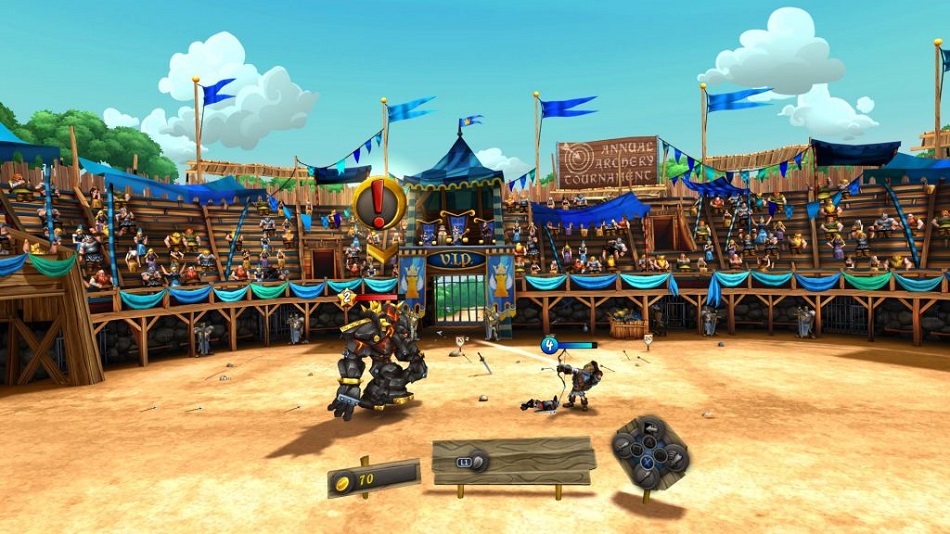 The art design works quite well in this format – while the soldiers can look a little blocky and low-res when zoomed in for cutscenes, from the spotter’s view they’re a set of animated miniatures, wading into combat as the player covers them with wildly-flung boulders or well-aimed lasers. The developers have even gone the extra mile and fleshed out the background of each stage. There are now elaborate vistas stretching back, often filled with cute comedic details to catch the eye. However, such distractions can quickly prove dangerous during more intense levels.

Even the game’s cutscenes have received the VR treatment – before each level begins, players are dropped into a fully-drawn virtual movie theater where a few characters join them in tiered seating, watching the plot as it unfolds. It’s an effective and common-sense solution for menus in VR – just give players a virtual screen to interact with before the walls fall away and they get a look at a fully VR world.

There is one drawback to playing in VR, though – there’s no way to zoom in on the action. While the original let players aim carefully at troops and control their hero with the screen centered on the action, Castlestorm VR never adjusts its discrete distance from the fray. This makes headshots a little harder to pull off and it’s possible for heroes to get lost in a crowd of troops, but the advantage of being able to have a clear overview of the flow of combat and improved castle-to-castle combat pretty much balance out the two versions.

Right now, the vast majority of PSVR titles focus on the first-person experience. While it’s easy to see why developers default to this idea, Castlestorm VR is the latest title to show that many other genres can not only work, but thrive in virtual reality. Castlestorm was already a solid action/strategy game, but putting players into the world and letting them freely control the camera by simply looking around raises it to another level. In addition to providing PSVR players with a cute medieval strategy game, Castlestorm VR poses a question – what other games might benefit from an unlocked camera in VR? Rating: 8 out of 10

Disclosures: This game is developed and published by Zen Studios. It is currently available on PSVR. This copy of the game was obtained via publisher and reviewed on the PSVR. Approximately 5 hours of play were devoted to the single-player mode, and the game was not completed.  There are no multiplayer modes.

Parents: According to the ESRB, this game is rated T and contains Blood and Violence. It’s pretty harmless, as T-rated games go. No ribald humour here, and only minimum amounts of blood. There are hints of boozy Vikings that aren’t mentioned in the rating, but it’s pretty tame stuff.

Deaf & Hard of Hearing Gamers: There are no audio cues that don’t have visual accompaniment, so you should be fine.