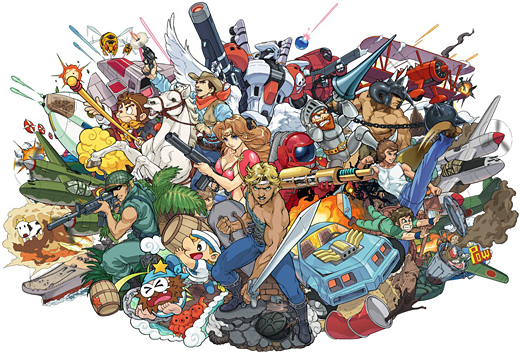 WTF Who thought it was a good idea to include 3 versions of 1942?

Released as part of a 30th anniversary celebration, Capcom Arcade Cabinet gives nostalgic players (or their curious children) a chance to sample some of the titles that sucked up quarters back in the day.

In addition to the still punishingly-difficult games, Capcom Arcade Cabinet features a host of additional features and modes designed to ease players into the arcade world as gently as possible. Armed with training modes, level selects, and an autofire button designed to prevent carpal tunnel lawsuits, the front end is as accessible as can be. The games contained within, on the other hand, are a wildly mixed bag of true classics, best forgotten missteps, and "WTH is this doing here" oddities.

The first pack of games is a good one, offering Black Tiger, 1943, and Avenger. Black Tiger stands out from the rest as an especially noteworthy title, as it has a surprisingly large number of RPG-lite elements for a side-scrolling arcade game. With optional side dungeons, persistent upgrades, and shops to stop at, there's enough depth here to warrant a look. 1943 is a shmup classic, letting players battle the Japanese Navy over Midway, downing hundreds of zeroes and sinking battleships. Avenger is the weak link—a top-down fistfighting game, players are supposed to work their way through a city rescuing damsels, but stiff controls and massively unfair bosses conspire to kill its appeal.

Pack 2 offers two full-on classics and one decent, if unimpressive title. Section Z is side-scrolling shooter that follows a jetpack-equipped soldier on a journey through a twisty robot stronghold. While in some ways it's just a dry run for some game mechanics that wouldn't really be polished for another few years, approached on its own terms it's a thrilling enough ride. Gun.Smoke is, in addition to being a surprisingly well-animated game for its time, important for being an early example of a conceptually daring shmup.

Rather than piloting some kind of vehicle, the main avatar of this game is a Wild West marshal out to bring in a bunch of desperadoes. The unique 3-button firing setup takes some getting used to, but once players are comfortable with it, they'll find this to be a nice departure from standard classic shooter fare. The final game is Ghosts 'n Goblins, which is both easy and impossible to recommend. It's a repository of fantastic art design, and each of the game's six areas has a distinct look and style of foes. I would whole-heartedly encourage people to play the game except for one tiny feature—the complete randomness of the enemies' movements. 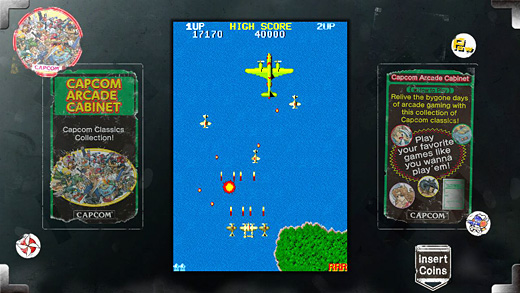 Part of becoming good at these classic games is learning enemy patterns and behaviour—Ghosts 'n Goblins throws all that out the window by having enemies that appear to do whatever they want, whenever they want to. The worst offender is the Red Demon, a character so infuriating and memorable that he actually got a spin-off title. It's a good game, but anyone setting out to play it had better prepare themselves for frustration that edges into controller-throwing territory.

The third pack is where things start to go off the rails a little.

The most recognizable game is Trojan, a side-scrolling beat-em-up with a unique setting—a sword-wielding hero in a post-apocalyptic future battles armies of "Greeks" to get to their leader, the nefarious "Achilles."

This is a flat-out terrible game. The fighting is horrible, based more on luck than anything else, and the controls are weirdly awkward to learn. It's got an interesting look, but absolutely nothing else going for it.

Legendary Wings is another odd one: a top-down shooter where a pair of winged heroes shoot and bomb their way through a variety of environments before switching to side-scrolling for boss fights. The art design really drops the ball in Legendary Wings, as enemies tend to blend into the background, making the shooting far harder than it should be. Adding insult to injury, the "continue" function resets players back to the beginning of whatever level they were on, rather than picking up where they left off. Here's a tip, programmers of 28 years ago—if I could beat level 2 on just three lives, I wouldn't have needed to continue.

The pack's saving grace is its final game, Wild Arms, the side-scrolling shmup that puts players in control of some upgradable robot fighters moving through bizarre alien environments blasting a wide variety of foes. More than almost any other title in the Capcom Arcade Cabinet, it's a great co-op game. It feels a lot like an updated, expanded-on version of Section Z, covering some of the same ground, but different enough that it's worth playing both.

The final pack seems to be the most experimental and inessential. 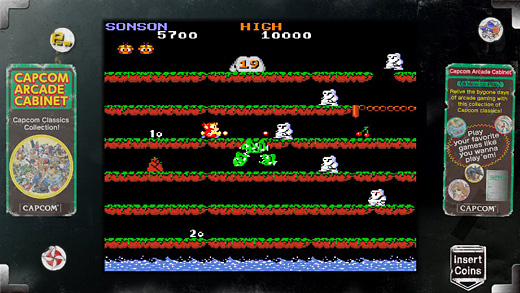 Putting 1942 on it is a choice so strange it almost seems like an insult. In every meaningful way it's the exact same game as 1943, only not as good. I can't imagine why anyone thought it was a good idea to sell essentially the same game twice. And then add a third version of it as a bonus title. Weird.

Son Son is a version of the Monkey King story which places Goku and his flying cloud in a side-scrolling shooter, constantly scrolling right, blasting away at enemies and jumping up and down levels, collecting delicious fruit and slaying foes. It's a little primitive, but makes for good twitch gameplay—the biggest drawback is that the game seems to have been made before letting players continue for more money was a thing, so only truly dedicated players have a hope of getting to the end.

Pirate Ship Higemaru is just flat-out strange−a puzzle/action hybrid, the game has players running around the deck of a ship, shoving barrels to crush pirates. It's got a completely different feel and pace than the other games in the Capcom Arcade Cabinet which tend towards straightforward action, so it seems wildly out of place in the collection. It's easy enough to learn and all the gameplay mechanics work as they're supposed to, but given how many other Capcom games were passed over for this collection, its inclusion is bizarre.

Along with the trainers to make things easier, Capcom Arcade Cabinet's front end offers a host of visual options for players looking to make their experience as authentic as possible. Whether it's rotating the screen for shooters and stretching right to the edge, or artificially degrading the quality of their television, all the options videophiles could ask for are on display. There's even a nice selection of bonus items that can be unlocked by playing through the games.

Capcom Arcade Cabinet is nostalgia in its purest form. At this point it isn't really fair to judge the quality of individual titles—all of these have aged into legacy status, and most of their flaws can be overlooked, operating under the assumption that anyone looking to play a 30-year-old game won't go in expecting a modern level of playability.


Disclosures: This game was obtained via publisher and reviewed on the PS3. Content pack 4 was not provided for review. Approximately 15 hours of play was devoted to a combination of single and multiplayer modes. Some of the games were completed.

Parents: According to the ESRB, this game contains fantasy violence, partial nudity, use of tobacco. You finally have a game you can let your kids go hog-wild on! The T-rating and content warnings suggest a level of salaciousness that isn't visible in the games. While there might be the occasional skimpy costume or cigar-chomping background character, these are mostly harmless titles that children of all ages can enjoy.

Deaf & Hard of Hearing: You'll be great. These games are almost entirely visual experiences. There's no plot to miss out on, and there are no vital audio cues that will effect your gameplay.