While it's often difficult to judge a game by its cover, those interested in prejudging their interactive entertainment can find a useful clue in title cards. Often unskippable, sometimes humorous, these company-identifying graphics are players' first exposure to the game, and are thought to be a valuable marketing tool. Just look at Lionhead's interactive corporate ID. While a nice logo doesn't guarantee a good game, a terrible logo suggests that the developers didn't care at all what people think of them, which should instill a sense of dread in the heart of the savvy gamer. What does all that have to do with Cabela's African Safari? It's simple, actually—the game starts with what has to be the worst title card I've ever seen. Seemingly recorded from the best Quake mod 1998 had to offer, a trip down a blurry, low-res hallway leads to a door which opens, revealing the company's ludicrous name. If this was the best first impression Fun Labs wanted to make on people, what could their finished project possibly be like? The answer: every bit as shoddy as the title card suggested. 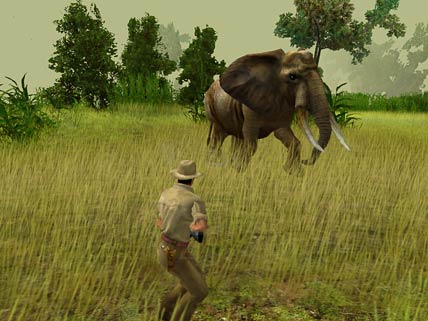 A third/first-person shooter, Cabela's African Safari attempts to recreate the thrill of big-game hunting in a slightly less fatal context. The player gets to visit six different African countries, and hunt the rarest and most dangerous animals that they have to offer. This is accomplished by walking and running around an African landscape, then switching over to scope mode and blasting animals as they drink from streams or sun themselves on a rock. Just to offer a quick admission: I've never been been big game hunting, and I don't know a whole lot about big game hunting, yet somehow I suspect that Cabela's African Safari isn't doing the subject much justice.

The problems begin with the game's mission structure. Broken up into six sections, one for each African country the game is set in, each chapter begins with the player being given a list of all the animals they'll have to kill before getting a shot at one of the 'Big Seven', the deadly trophy animals that are meted out at a rate of 1.17 per chapter. Instead of just being able to go out and find the animals, though, the player is forced to take part in scheduled 'hunts', going after just one of the country's nine animal types at a time. If that wasn't artificially restrictive enough, when I'm out on one of one of these hunts, I'm not allowed to shoot any other kinds of animals, even if they're on my list. So if I'm tracking down a steenbuck (one of the many, many different kinds of antelopes I was tasked with killing) and I happen to see a zebra wandering around, I'm not allowed to kill it, despite the fact that I have to kill three zebras before I'm allowed to leave Botswana.

Making things worse is a poorly thought-out time budgeting mechanic. At the beginning of each day, the player is shown which three hunts will be happening that day, and how long they will take. If two missions conflict with one another, I can never do both on the same day, no matter how quickly I complete them. For example, if I go off at 9AM to kill a few Dik-Diks, and manage to get the whole thing wrapped up by 10, I still can't go on the duck shooting mission at noon, because the Dik-Dik hunt was scheduled for five hours. I'm sure the developers has the best intentions, hoping that time management would add a seeming level of strategy to the game. The shallow implementation of the idea just leads to frustration, and the game would have been better off making a decision: let the player hunt the animals in any order they want, or just strictly lay out a mission structure. Sticking to this weird middle ground accomplishes nothing. 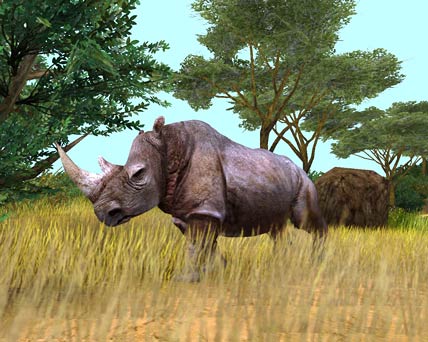 Then there's the actual gameplay, which comes with its own bevy of problems. Each hunt takes place in one of twenty or so small valleys, where the hunter has to wander through the brush, looking for his prey. Here the game stumbles again, since there's no good way to track the animal I'm hunting for. In the menu screen a guide can give advice about the general area in which to look, but actually going out and looking is a ridiculous chore. The game has such an inexcusably short draw distance that simply walking up to the highest hill and looking around doesn't work. On the lower difficulties the game provides the player with a radar which directs them to their prey. On the highest difficulty levels I was forced to rely on the onscreen crosshairs, which gradually changed from black to red as I approached my target. Not really moving towards realism, there.

When I finally find the animal, the shooting is overly simplistic. No bullet drop or wind direction to consider here. Killing animals is a simple point-and-click affair. There's even an option to slow down time and ensure that every shot is a bull's eye. It's simple enough to play, but almost hilariously unrealistic. It's the game's depiction of animals, though, that really falls short on the technology side of things. As long as the animals are simply lounging around and minding their own business, everything looks fine, but the moment the shooting starts, so do the problems. If they're shot and killed, every creature rolls around, locked in a pose, bouncing with ridiculous physics. If they're not killed, though, it's even worse, because every animal's running animations are embarrassingly poor. Their legs seem to hover over the ground, they turn on a dime with no momentum or direction changing animation, and they don't have any 'wounded' animation to speak of: they just start moving in slow motion. The animals don't even bleed, leaving trail for the player to follow after they've disappeared into the brush.

In the end, gamers are all just a bunch of people sitting in front of a television holding a controller, so simulation games must be judged on their ability to make gamers feel like they're performing an action within the limitations of the technology. Cabela's African Safari's poor controls, design choices, and graphics keep this immersion from ever happening. I may not know anything about big game hunting, but I know for a fact that this isn't it. Rating: 2 out of 10

Is this one anything like the old school Dangerous Hunts? I love that game, and all the new hunting games are no good compared.