The Cold War No More 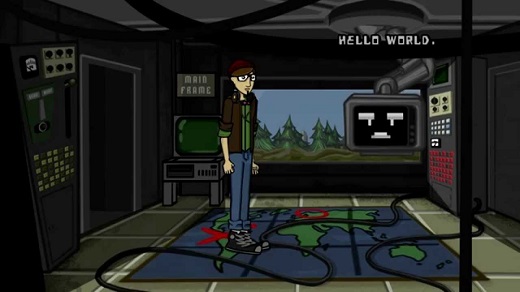 At first glance, Bunker could be held up as the perfect ideal of the indie low-budget adventure game. It seems to have been cobbled together out of a top ten list of the things that the internet likes, with absolutely no concern for how any of those elements might fit together. Giant robots, afros, kittens, genocide, Chrono Trigger—they all make cameo appearances, none to any great impact. While it's obvious that the game isn't meant to be taken seriously, that doesn't give the developer an excuse to randomly throw things at the wall and then charge money for them, regardless of their stickiness.

A point-and-click title of the 'fill your bottomless pockets and hope the items become useful at some point in the future' variety, Bunker tells the story of a blank slate who finds himself kidnapped by Russian organ harvesters and taken to the titular bunker. He must then escape at any cost.

While the character technically has a name and occupation, he comes across as a complete nonentity whose comments to the player are some of the least colorful I've ever encountered. The closest he ever gets to having an actual personality is when he refuses to pick up a few random items that he finds lying around the bunker because he's 'not a thief'.

That actually suggests an interesting concept—what would happen if the main character of an adventure game was too principled to take part in the egregious ransacking that makes up the majority of adventure gameplay? It's a concept that goes unexplored by Bunker, however. The character only mentions this ethical dimension when he's dealing with items that aren't necessary to the story. The rest of the time he's as sticky-fingered as any other video game protagonist.

This brings me to the game's puzzles, which vary wildly across the course of playtime. The first half is actually quite engaging, with limited rooms and areas that can be interacted with, leading to comparatively simple puzzles that can be figured out with a bit of patience and ingenuity. There's even a clever one about opening a lock using money that actually impressed me.

The puzzles takes a nosedive in the game's second half, however, with tasks so random and oblique that no logic seems to apply to them, and the controls are so bad that it's nearly impossible to tell whether progress is being made or not. At the same time, the game's humor plunges into the toilet—literally in one scene—and stays there so aggressively that it becomes unpleasant to play to the end.

Perhaps realizing just how bad the game was getting, the developers began leaning heavily on video game meta-humor in the home stretch, as if they were hoping tired jabs about DLC and bad game design might convince people that Bunker is a satire, and therefore be less likely to comment on its shortcomings.

While all this was already bad enough, everything comes to a head when the game delivers a terribly frustrating non-ending that attempts to pass as a parody of Deus Ex and Mass Effect's finales. It's lazy and awful, apart from any commentary they may have been attempting.

While there's nothing particularly innovative about it, for the first hour Bunker shows flashes of wit and intellect. Then the developers stopped putting real work in, and combined incoherent puzzle design with bathroom humor before throwing up their hands and bringing things to an abrupt end because, apparently, it wasn't even funny to them anymore. Bunker could have been a decent adventure title had the devs shown some follow-through, but the diminishing lack of effort kills the game's potential long before it ends. Rating: 4.5 out of 10


Disclosures: This game was obtained via publisher and reviewed on the PC. Approximately 3 hours of play was devoted to single-player modes, and the game was completed.

Parents: The game was not reviewed by the ESRB, but it contains violence, blood, alcohol use, puerile humour. Nope. Drinking, violence, omnipresent bathroom humour. This one isn't for the kids, despite the cartoony art style. Save it for older teens, please.

Deaf & Hard of Hearing: No problems here—it's a point-and-click adventure with no audio cues! All dialogue is subtitled.

Quite a shame. From the promos this game definitely looked like it had promise. Maybe I’ll check out a let’s play to see just how bad the humor is.