Welcome Back, I Guess? 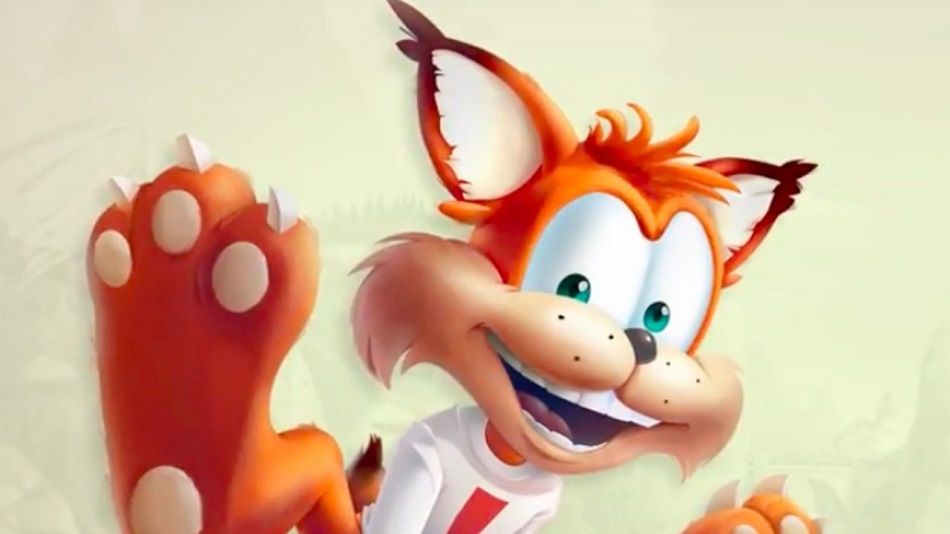 HIGH Do I have to think of one?

LOW The second boss, with its sadistic attack patterns.

WTF A ‘No Country For Old Men‘ reference in a kid’s game, huh?

I can’t speak to the origins of the Bubsy franchise, my only experience with it being dim memories of playing a little at a friend’s house and quickly growing bored before returning to Final Fantasy 3. As such, I have no idea how faithful this new iteration is to its roots, and can’t say whether it fails because it’s too similar to what came before. It does fail, though. Of that, I’m absolutely sure.

Things kick off when Bubsy’s house is attacked by string-themed aliens who steal his precious golden fleece, which had been spun into a ball of golden yarn at some point, presumably for convenience’s sake. Why do the Woolies want the golden fleece? Why is it so important to Bubsy? The game isn’t really interested in explaining these things – there’s absolutely no story beyond the brief opening cutscene and a short ending video.

The gameplay is entirely built around classic platforming. Bubsy drops into a level, and he has to find his way to the other side. On the way there are Woolies to kill, yarn to snag, and a special vault to unlock, but nothing that players haven’t seen dozens of times before. The only thing even slightly fresh about the design is combo time – the only thing that offers points in each level is picking up hundreds of yarn balls scattered all over. Each one snagged fills up a timer, which then increases the multiplier, making each ball more valuable.

It’s a decent system, but it feels half-implemented. Bubsy doesn’t offer criteria for what a good score might be, and once players are out of the level, it’s nearly impossible to find out what their best score for that level is. According to the map, the only things being graded are whether the player unlocked the vault, found all the extra lives, and made it through without dying. This strips out any motivation to bother collecting the yarn that absolutely fills every level. Would it really have been that difficult to set some score thresholds and give players bronze, silver, and gold medals for hitting them? It’s what literally every other game does. 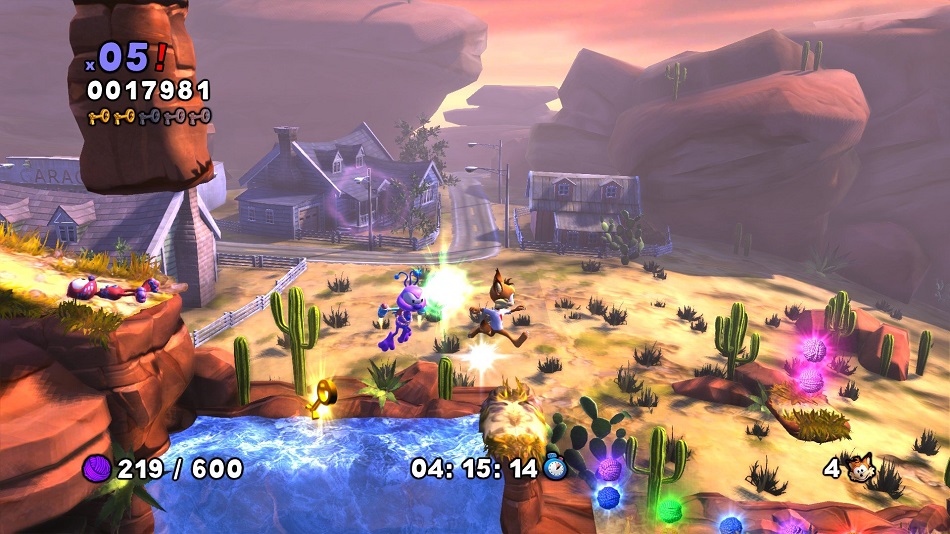 The controls aren’t especially solid either. Bubsy is armed with a jump and two special moves which can be performed on the ground or in mid-air. There’s a glide which lets them fall slowly or be carried by air drafts, and a pounce which allows them to fly forward and smash through walls. Each is flawed in its own way. The glide is hard to control, with a habit of making Bubsy drift too far when it’s used. The pounce, on the other hand, carries the player too high up into the air, making it extremely difficult to use as an attack since Bubsy will fly clear over the target’s head. Couple these awkward moves with the Woolies’ jerky movements and unpredictable hitboxes, and the player is left with a recipe for frustration whenever they have to kill enemies… which is all the time.

The game’s graphics suffer from a lack of inspiration and variety. The Woolies themselves are strangely flat, lifeless creations, offering no real visual cue that they’re supposed to be yarn-based life forms. If someone were to tell me that this was a game about Bubsy fighting large bipedal ants, there’s little visual evidence to argue with the theory. The levels are even more disappointing — there are just three different areas, each one offering five stages and a boss fight. The problem is that other than slight changes in the coloring and textures, all of the levels are nearly identical.

In each section, Bubsy is always jumping around the same rocky terrain, whether it’s lush and forested or dry and arid. When I saw that the final levels were going to be set on a spaceship I was briefly optimistic that the aesthetic was going to shift to futuristic corridors and engine rooms, but my hopes were dashed when I discovered that the Woolies have – conveniently for the developers – turned a giant asteroid into a spacecraft. Meaning? That all I had to look forward to was another five levels of generic rough terrain, this time with a purple hue!

Bubsy: The Woolies Strike Back is a mess. Bad controls, uninspired enemy and level design, and a total lack of motivation to keep playing. I want to find something nice to say about it, but even the three boss fights are tedious, confusing slogs. The game ends with a promise that Bubsy will return in another installment, but it feels more like a threat. Rating: 3 out of 10

Disclosures: This game is developed by Black Forest Games and published by Accolade. It is currently available on PC and PS4. This copy of the game was obtained via publisher and reviewed on the PS4. Approximately  6 hours of play were devoted  to the single-player mode, and the game was completed. There are no multiplayer modes.

Parents: According to the ESRB, this game is rated E and contains Mild Cartoon Violence. This one is completely safe for kids. Enemies are disposed of in a delightfully bloodless fashion, disappearing in a puff of smoke when attacked. Beyond the combat there’s no other content, and therefore nothing to object to. Bubsy has some canned comments, but the comedy is all completely safe. There are some sand sharks that might frighten very young children.

Deaf & Hard of Hearing Gamers: I played the game almost entirely on mute and never had any problems with it. It’s fully accessible.

You’re a braver man than I.