If I were asked to create marketing materials for Broforce, designed to sell it to its obvious target audience with a single sentence, I would offer the following: "Broforce is the game you thought you were playing in the 80s." With its generic terrorist foes, near-omnipresent explosions, and general sense of reckless abandon, Broforce is a perfect example of pure adrenalin candy, which the developers have helpfully broken up into bite-sized chunks, with elaborate, fully-destructible levels that never last more than a couple of minutes. 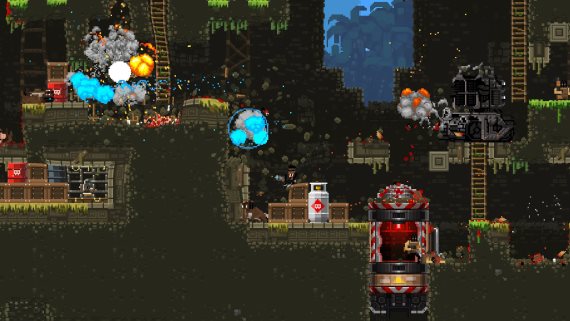 At the moment the game lacks anything but the most basic structure – in its beta form players are dropped into a level with no instruction other than 'go any direction but left', and it's up to them to determine what kind of threat the various pixel-art foes present, and how to best explode them. Some design choices suggest a plot may eventually be forthcoming – each level ends with the opportunity to execute a devil wearing a business suit, presumably that means something. For now, though, all of the violence is entirely context free, relying on visual signifiers to let players know that the bad guys are the ones in balaclavas, and the good guys are the ones themed after twenty years of American action heroes.

Players start off controlling Rambo, but are allowed to quickly unlock extra characters by rescuing hostages in-level. This leads to the game's rather odd 'extra life' mechanic, in which each level is started with a single life that can be ended by a single bullet, and extra chances can be obtained by freeing prisoners. That's standard enough – what makes things strange is the fact that rescuing someone always causes the player to transform into that hostage, and there's no way of predicting which character they're going to be. Then after they die, the 'extra life' transforms players into yet another character, with a whole different set of abilities. On one level the constantly shifting gameplay mechanic add to the game's thrill, but there are some characters who are so profoundly ill-suited to certain situations that on many occasions I was kicking myself for gaining an extra life at the expense of trading a super-effective sniper rifle for the ability to punch really fast. 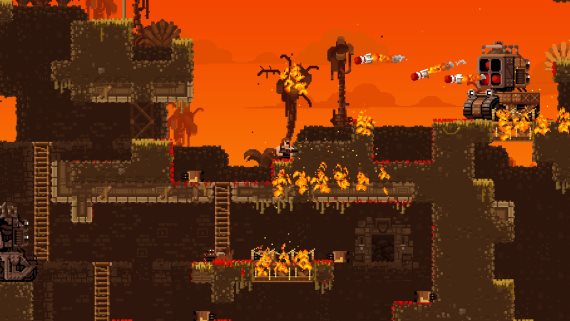 The roster of characters really is impressive, though, including all of the big names in the action genre, along with a number of choices which, while not exactly obscure (there's no Jesse Crowder parody or anything like that) were definitely surprising to see turn up in the game. A lot of work has clearly gone into thinking through the various characters, giving them each a main weapon and special attack that both fits the character thematically and works within the game world. While I was a little disappointed with the melee-themed characters, I was delighted to discover a game in which a MacGyver parody was one of the most powerful options.

Still in a very rough state, Broforce's various menu screens all take pains to remind the player that everything is a work-in-progress, and thank them for their patience. With just two playable biomes, a handful of enemy types, and multiplayer I couldn't get working, Broforce is still nothing more than a glimpse of what could very well turn into a truly great game down the line. Is it currently a little spare? Absolutely – but the game's brief levels and lack of any substantial penalty for failure combine to, even now, make it an endearing little platformer. This isn't a game about strategy or technique, it's about setting off huge chain reactions of explosions and having faith that once all the dust has cleared everything will turn out for the best. 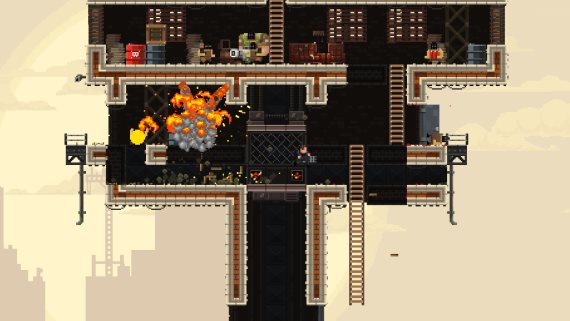 Usually, that's the case, and I can see the developers being able to put together quite an amazing finished product based on that principle alone. Anyone who can't wait for the finished product will find Broforce to be an entirely playable Alpha, with the added bonus of having access to a level editor which allows them to start contributing to the game's community even before it's released.