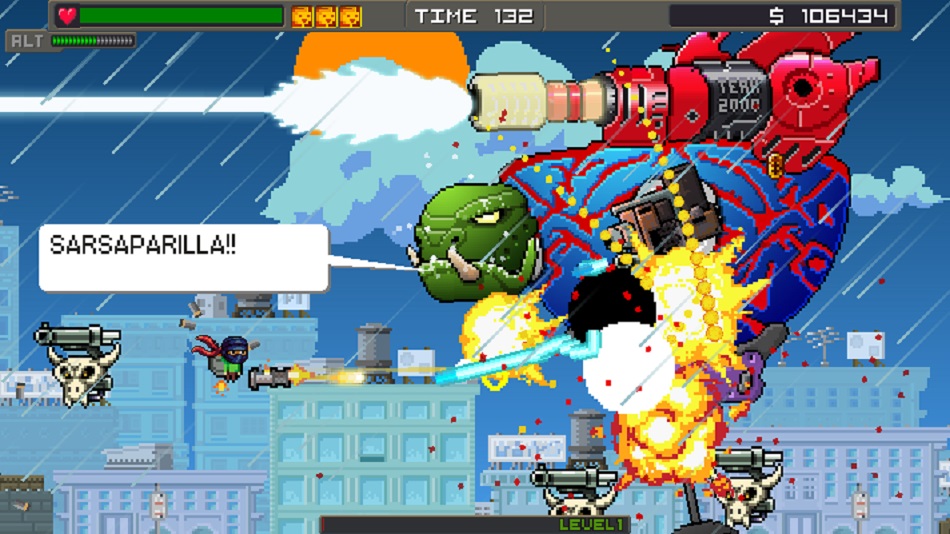 LOW I accidentally unlocked everything before starting the real game.

WTF The return of the boss-maker.

Boss 101 couldn’t have come at a better time. While Cuphead is out there humiliating thousands of people foolish enough to take up arms against it, Boss 101 swoops in with an antidote — A boss rush experience that’s completely accessible and beatable by players of all skill levels. That’s right, boss rushes aren’t just for hardcore masochists any more!

The game is set in a near-future world where Earth has been conquered by a heartless robo-bureaucracy and then left to its own devices. This proves to be a poor decision on the part of the Robo-council, as it allows a group of rebels (including a talking jetpack and a kid desperate to impress his X-Games star brother) to fight back against the various bosses who have set up bases throughout their arm of the Milky Way galaxy.

These boss fights make up the vast majority of Boss 101‘s content. Beyond them, there’s only story segments and a couple of classic arcade minigames. Fortunately, the boss fights are intensely playable, using the techniques of bullet hell games to challenge players while letting them earn enough health to survive the onslaught of beams, rockets, and arcing electricity. At the end of each fight players get a payout based on their performance and the boss’ bounty, and they can use the money to unlock weapons or upgrade stats to prepare themselves for the next match.

Also, the player enters each fight with an upgradeable machinegun and special weapon of their choice, and they’re free to swap between the two at will – each boss is weak or strong against particular weapons, so players will want to practice with all of them so that they’re ready for whatever comes.

…Or maybe they don’t, considering Boss 101‘s most intriguing feature — the boss generation mechanic. The game offers an interesting narrative conceit in that every time the player warps onto a stronghold planet, a boss is constructed to fight them. 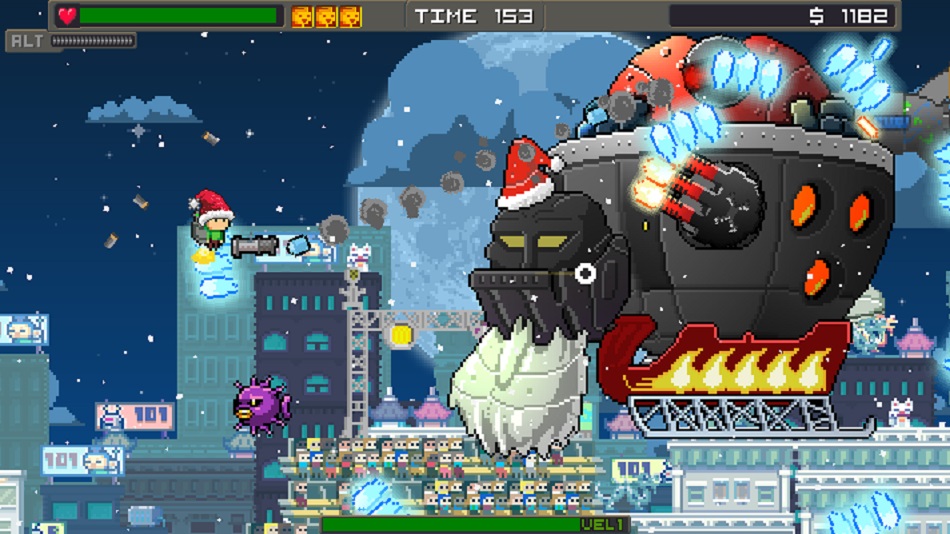 The human forces have an ace up their sleeve, however – they’ve hacked into the boss generation algorithm, allowing them to randomize the boss output every time they head off to fight one. In practice, this means that the player is always able to choose which boss they’re fighting, with the exception of four setpiece battles. Like using the flamethrower? Just keep rerolling the boss until it’s weak against fire. Prefer bashing bosses apart with a giant wrench? A few more clicks and it’s suddenly very doable.

The result is that Boss 101 is a game that is exactly as difficult as the player wants it to be. They’re always free to fight whatever the first boss loaded is, just as they’re able to spin the wheel as many times as it takes to spawn a crumbling wreck that’s nearly ready to defeat itself.

Players looking for a more traditional challenge can try the boss rush and iron man modes – and yes, there’s a boss rush mode within the boss rush game. In these, the player is thrown up against a series of truly randomized enemies, each one with more health than the last, until finally they run out of steam. Any money earned during these bonus modes can be used in the main game, so an industrious player could easily unlock everything the game has to offer simply by practicing their boss-fighting before delving into the story mode.

The game’s pixel-art style is another strength – specifically, the design of the modular bosses. Each of the game’s 40 pre-built bosses has five distinct body sections, with each one employing a different kind of attack. As bosses are generated, each of the five sections a randomized to offer a functionally-unlimited number of possible foes, each one more bizarre than the last. I saw a dragon with a shark head and a beehive coming out of its back, and another time, a brontosaurus riding a samurai sword with a robot head. Every boss creation is more loopy than the last, and I never tired of seeing inventive new combinations.

However, the most unexpected thing about Boss 101 is how utterly chill the whole experience is. The cutscenes all feature light comedy conversations between quippy characters, and the threat posed by the enemies never seems particularly dire or imminent. Even Boss 101, the game’s titular villain, seems like a perfectly reasonable fellow who’s not particularly concerned about the wave of destruction crashing over the planets he controls. All of the elements combine to create the first side-scrolling bullet hell game to qualify as a ‘hangout’ title. There’s even a bonus mode where the player can fly a kite while the main character and his jetpack muse about the big questions in life.

With its simple gameplay and great style, Boss 101 would have been a perfectly serviceable ‘light’ bullet hell shooter. The fact that it has endlessly diverse bosses and a huge wealth of bonus content is just gravy. I’m always happy to see developers attempting to revitalize genres and bring them to new audiences, and this is a perfect example of devs going above and beyond to deliver far more game than they needed to, aimed at a larger audience than I would have thought possible. Rating: 8.5 out of 10

Disclosures: This game is developed and published by Donley Time Foundation. It is currently available on PC. This copy of the game was obtained via publisher and reviewed on the PC. Approximately 6 hours of play were devoted to the single-player mode, and the game was completed. There are no multiplayer modes.

Parents: This game was not reviewed by the ESRB, but it contains Fantasy Violence. It’s fun for children of all ages! Seriously, this thing is basically harmless. A guy in a jetpack shoots robots until they explode. There are references to people being killed off-camera, but it’s never scary or threatening in the least. Basically anyone can play this game.

Deaf & Hard of Hearing Gamers: You’re fine. I played almost the entire game without sound, and all I had just one problem: The final boss has a charge-up laser that can completely destroy the player in seconds. Immediately before it fires, it makes a distinctive whining sound. Without being able to hear it, you’ll have to be much more careful about getting out of the way of the beam early.

Hello all! This is Tim (one of the developers of Boss 101). . . Thank you so much for the review! Really enjoyable read and it really does capture the spirit of the game quite well. Also loved Daniel’s YouTube videos on Boss 101, super fun and his voices and reactions were perfect! Daniel might be interested to know that because of his Boss 101 videos and feedback we made a few improvements since launch. All of these are in game right now and available to anyone who purchased the game or who will purchase it. Difficulty Settings – Easy,… Read more »