Black and White and Red 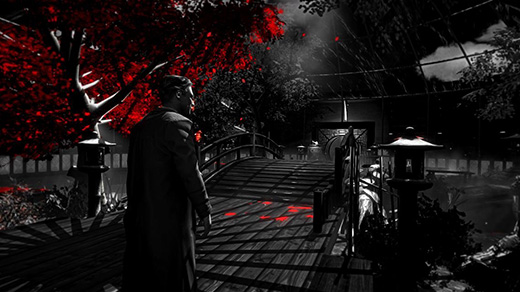 HIGH Choosing between escaping or saving a child's life.

LOW The achingly unfunny and mood-breaking 'gag' with the knife thrower.

The thing that struck me most profoundly as I played Blues and Bullets is that at some point in recent history, Eliot Ness had been inducted into the ranks of mythological heroes.

Blues and Bullets could be about any washed-up cop rescuing an innocent from beyond the gates of hell, but the developers understand the impact that the Ness name brings to their story. Although he's been dead for less than 60 years, he's become the kind of figure that artists feel comfortable using because of what he represents, rather than because of the details of his biography. The interpretation of the man in this game strays from reality in a number of ways, but its developers know that by using this new mythology, they elevate their material.

As a gorgeously unichrome adventure game built in a Telltale-like style (The Walking Dead, A Game of Thrones, etc.) Blues and Bullets finds a fifty-something Eliot Ness living the quiet life, toiling away at a diner that caters to cops on their lunch break. When a thug stops by and places a bullet on the counter in front of him, Ness is dragged back into the world of murder and mayhem as he investigates a series of child abductions and an abyss of remorseless killers and dark religion.

The game impresses right off the bat, dropping the player into the role of an abducted child and giving them a glimpse of horrific conditions somewhere below the streets of Santa Esperanza. It's a jarring way to open the game, with a goat-skulled beast arriving to put the fear of (a) god into the young ones, forcing the player to question exactly what they're playing. It's a dynamite, but it doesn't hold a candle to the post-credits sequence which again checks in on the victimized children—only this time it's to let the player know that their 'moral choices' had consequences. Choosing between two options has rarely been as impactful as it is here.

The rest of this initial episode sees the player in control of Ness, and it's admirable how much credit it gives to the audience, assuming that everyone playing will have a general idea of who the players in the game are. Any important points that need to be added come up in natural conversations that never feel like awkward exposition dumps. The game's writing is of a similar high quality all the way through, building believable characters, offering clever dialogue choices, and setting up a mood of encroaching darkness. If it weren't for one wildly discordant joke, I'd say that this was the most promising first chapter of an episodic adventure I've ever seen.

In fact, Blues and Bullets is so well-written that it could get by with Ness engaging in nothing but conversations and the occasional QTE, but the developers have a set their sights a little higher by including a full investigation sequence that ranks with the best attempts at depicting detective work in video game form.

When Ness arrives on the scene of a shockingly brutal crime, the player is free to roam the area and focus on items of interest, closely examining corpses and evidence to find even the smallest clue. Then the player goes to a virtual case board that feels like a more streamlined and intuitive version of Sherlock Holmes: Crime and Punishment's mental map. Using this map, Ness poses rhetorical questions about how the crime went down, and the player has to plug in pieces of evidence to figure out the sequence of events.

These aren't the most challenging puzzles in the world—the evidence isn't that hard to find, and as far as I can tell players aren't allowed to screw up the conclusions—but the developers managed to make it feel like I was solving the crime right along with Ness, rather than just hearing pre-written conclusions. I've seen many games attempt crime scene investigation, and this is as good as it gets.

As the first chapter of an episodic adventure, Blues and Bullets accomplishes everything it needs to—great writing, interesting characters, hints of a compelling story, and engaging gameplay are all present. I can't predict whether this level of excellence is going to be maintained, but as it stands, it is absolutely worth playing for anyone with even a passing interest in detective stories or Telltale-style interactive movies. They simply don't come any better. Rating: 9 out of 10


Disclosures: This game was obtained via paid download and reviewed on the XB1. Approximately 2 hours of play were devoted to single-player modes, and the game was completed.

Parents: This game was not rated by the ESRB, but contains blood and gore, violence, alcohol and tobacco use. You should keep kids as far from this as possible. Not only is does it feature one of the more gruesome murders I've ever seen in a video game, they have the option of making the main character a drunk if they so desire. Yeah, so strictly for the adults, can't stress that enough.

Deaf & Hard of Hearing: You'll be fine with this on—no audio cues, and all dialogue is subtitled!