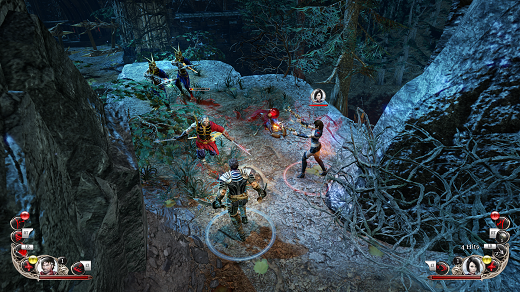 HIGH Stomping over foes as some kind of giant tree-vampire-thing.

LOW Falling off a cliff because the framerate decided to attack me.

WTF Since you're already stuck in that deathtrap, you couldn't possibly need all your blood, could you?

Within the first hour of Blood Knights, the player is forced to watch the moon explode as the result of tampering with eldritch forces. It's certainly an amazing spectacle, but it sets a bar that the rest of the game's storyline is unable to clear. After all, it would take an incredible story to be able to top an exploding moon, and this is, fundamentally, not an ambitious game.

A third-person co-op brawler, Blood Knights teams a recently-vampirized crusader with an experienced vampire markswoman on a quest to desplode (unsplode?) the moon and restore sanity to the world. This is accomplished by slogging through extremely narrow pathways, fighting repetitive enemies, and making endless minor equipment upgrades using an entirely superfluous loot system. Also, there are instant-death platforming sequences. Is this 2014?

Blood Knights attempts to disguise its fundamental shallowness by loading itself down with unnecessary elements. Even though it's just a brawler that takes less than ten hours to complete, there's a skill point system for unlocking special moves, a loot system with no associated grinding opportunities, and a host of consumable items that need to be purchased before boss fights. It's all a cluttered mess that's three times more confusing than it has any right to be.

Further, players are laden down with an array of stats that tout their own importance, but don't affect the game at all. A random sword will announce that it increases luck and critical chance, while slightly decreasing a given power's cooldown—but all of that is instantly forgotten when the player realizes that Blood Knights is a game about pressing X three times to stab a werewolf to death. Everything else is just a distraction.

All clutter set aside, Blood Knights also stumbles over its fundamentals. There's a nice nod towards asymmetrical gameplay with the Crusader wading into battle while the markswoman rapid-fires crossbow bolts from the sideline, and the game allows players to switch between them so seamlessly that the game works just as well for single players as it does for co-op. That isn't much of a compliment, however, since the combat offers few charms.

As the crusader, players will find themselves forced to hack away at every single foe—mobs don't have enough health to be a threat, but they do have enough to make killing each one a chore. Things are a little better as the Markswoman, who dodges around the stage, constantly firing and at least creating the illusion of entertaining activity. A design mistake makes her far less effective than she should be—the player uses a thumbstick to direct her bolts, but the aiming auto-corrects to the nearest enemy, making it nearly impossible for her to shoot the explosive barrels that litter medieval Europe.

The game isn't even free of major technical issues—whenever the screen fills with enemies, the framerate starts to stutter, crippling what little enjoyment could have been gleaned from the combat.

Blood Knights is representative of the terrible trend in game design where its devs have taken what might have been a mediocre-but-serviceable brawler and packed it full of systems that do nothing for the player but push them further away from the action. Rating: 3 out of 10


Disclosures: This game was obtained via publisher and reviewed on the Xbox 360. Approximately 8 hours of play was devoted to single-player modes (completed 1 times) and 2 hours of play in multiplayer modes.

Parents: According to the ESRB, this game contains blood, violence. Nope. There's lots and lots of murder and blood drinking, and the player gets to decide whether they're on the side of awful humanity or the slightly-more-awful undead. This isn't for children at all. Also there's a scene set in a pub where people are drinking, and the Vatican is one of the game's main foes.

Deaf & Hard of Hearing: You'll miss out on some of the dialogue, but important plot points are always subtitled, and there are no significant audio cues that don't have onscreen equivalents.