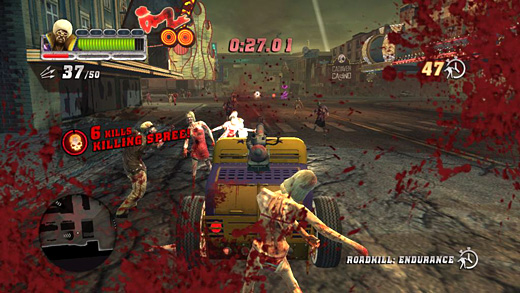 HIGH Watching zombies fly to pieces as giant buzzsaws cut through them.

LOW Being unable to find a zombie to use said buzzsaw on.

WTF The single-player events are two hours long. Without save points.

belongs to a rich video game tradition. Ever since the medium was invented, one concept has fired the imagination of developers more than almost any other: running things over with a fast-moving car.

Whether it was stick-figure "gremlins", hookers who try to flee with their hard-earned money, or, far more commonly, zombies, an argument can be made that video games were developed expressly for the purpose of simulating vehicular homicide. Considered in that context, Blood Drive's inability to competently execute its premise is downright inexcusable. With literally dozens of games offering instruction on how to do this right, what can Blood Drive's excuse be for getting it so utterly wrong?

In a world almost completely destroyed by a Zombiepocalypse, Blood Drive takes place in the city of Las Rulettas, a ruined Vegas clone where a variety of drivers have gathered to  compete in a game show where the undead are slaughtered for the amusement of the viewing public.

If this sounds familiar, it's because Blood Drive has the misfortune of being released two months after Dead Rising 2, a game that used Blood Drive's premise as a jumping-off point to tell a story about the sins of pharmaceutical companies in the third world, while commenting on the atrocities that self-described "ordinary, decent, people" are willing to overlook.

Blood Drive, on the other hand, is about what it's about: running over zombies with a heavily-modified car. That's not meant as a criticism—not every game has to possess a narrative agenda. Blood Drive can be forgiven for focusing solely on the visceral thrill of crushing zombies under the wheels of an armoured tow truck. What's less forgivable is that the two minutes spent chainsaw-motorcycling at the outset of Dead Rising 2 is more entertaining than the entirety of Blood Drive. 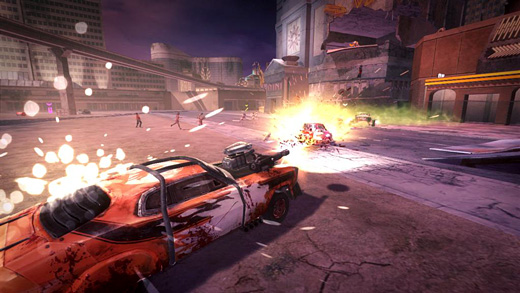 An exercise in car combat, Blood Drive allows players to choose from a selection of eight different vehicles and then enter in a shockingly limited series of tournaments and events. Normally I glide over a game's features during a review, but Blood Drive offers so little that there's no reason to not list them all. There are essentially just three different kinds of events: checkpoint races, kill the most kinds of zombies, and kill the largest number of other cars. The total number of event types is brought up to seven due to the game offering slight variants on the three main events, but none of them are such a twist on the formula that they're worth singling out.

Car selection largely determines how effective the player will be in any of the events—the computer AI is so lacklustre that they can't provide much of a challenge. The "hardcore" tournament merely jacks up the enemy's hitpoints and damage dealt to ridiculous levels in the hopes of covering up for a lack of difficulty offered by the events themselves. Simply put, if the player chooses either of the two heaviest vehicles, the car combat is a breeze. If they choose either of the two fastest then the races are simple.

Since tournaments always involve a mixture of the two types, it seems like a player would be better off picking a middle-of-the-road model that offers a little of each kind of ability, but in another one of the game's baffling design choices, a "car tuning" feature ensures that, essentially, any car is capable of easily beating any event.

Where most racing games of this type attempt to add some measure of depth by allowing the player to gradually upgrade and unlock vehicles and improvements, Blood Drive has elected to streamline the process (and remove all depth) by simply offering the player, at the beginning of each event, a variety of upgrades. Going into a race? Pick the one that offers doubled top speed and a full complement of boosts! About to fight other cars? Just use double armor and double ammo! The game does everything but pre-select all of these perks, leaving the player with every advantage imaginable going into the two competitive types of events.

The third type of event, which focuses on zombies and really ought to be the title's focus overall, is a critical, game-breaking disappointment.

In yet another poor design decision, only one of the eight weapons available is of any use in killing zombies, but it's so incredibly useful that simply remembering where it spawns on each of the game's six maps is enough to guarantee victory—or it would, were it not for a crippling tech limitation in which the game is incapable of tracking zombies who aren't currently onscreen. 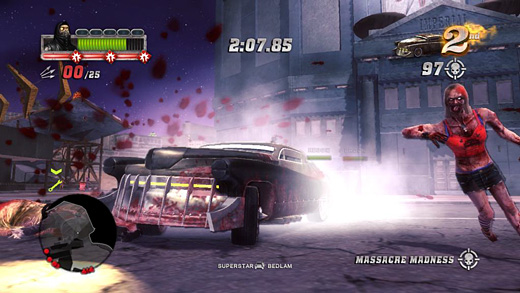 I couldn't begin to count the number of times I drove through a crowd of zombies then pulled a handbrake-turn, ready to annihilate them—only to discover that they'd all ceased to exist the moment the camera left them. Similarly, whenever I drove somewhere the game hadn't expected (off a building, or around a corner, for example) I would find myself faced with a completely unpopulated stretch of road. A few seconds later, as if embarrassed, the game would begin populating the area with zombies who appeared out of nowhere. The whole thing would have been funny if it weren't so incredibly sad.

So the gameplay is startlingly limited and technologically inept—the game's final absurd design flaw is just how much of it players are required to endure.

If players want to see a retro, fighting-game-style ending for one of the game's eight characters, it's necessary to play through all of the preliminary tournaments—which aren't especially painful, as they're designed to gradually introduce players to the game types and six different maps—and then attempt the Blood Drive Championship. It's this final tournament that acts as a dealbreaker. Why? It's thirty events long, and spread across all the maps.

This basically means that the player is asked to go to each map and play every single gametype once on it. In a row. Without being able to save, quit, and come back later.

Events range anywhere from a 3-5 minutes in length, meaning that a time investment of two hours is required on each occasion that the player wants to "finish" the game. The developers didn't even offer the player the opportunity to call the whole thing off once victory has been assured. I beat Blood Drive twice. During my second run, I noticed that with seven events and half an hour left, my victory had become a mathematical certainty. I was so far ahead in points that even if I came in last in each subsequent event, my victory was assured. So,instead of continuing to play, I headed to the kitchen to make dinner, wandering back into the room every few minutes to tap A and start the next event.

is a disgrace to its pedigree. The driving is lumbering and repetitive, the setting cliched and dull in its excess. The technological limitations that keep the game from offering Dead-Rising-style hordes of zombies to plow through rob the game of the one thing that it might have offered: base pandering to the vilest of instincts. If I'd been able to put the pedal to the metal and watch as hundreds of zombies were ground to muck beneath the wheels of my deathwagon, at least I'd have been able to say that it delivered on the experience that its premise promises. The fact that it couldn't even offer that renders the game a complete and utter failure. Rating: 2.5 out of 10.

Disclosures: This game was obtained via publisher and reviewed on the Xbox 360. Approximately 6 hours of play was devoted to single-player modes (completed 2 times) and multiplayer modes were not sampled.

Parents: According to the ESRB, this game contains: blood and gore, strong language, suggestive themes, violence. Limbs fly everywhere, blood splatters on every surface, obese zombies, filled to bursting with viscera, explode when touched. To top it off, there's plenty of profanity and crude objectification of women! Really, there's no reason for your children to play this game. Or you, for that matter.

Deaf & Hard of Hearing: In a wholly unexpected upside, this game has no vital audio cues that would render it unplayable by the hearing-impaired! That may be the furthest I've ever had to stretch to reach a silver lining!