The Playoffs Just Got Interesting 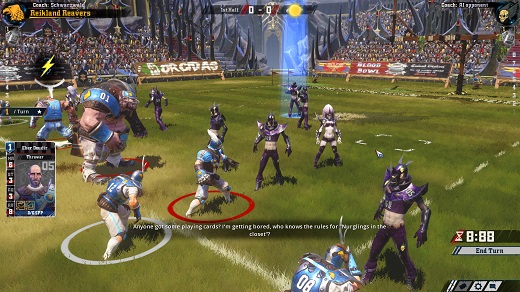 HIGH Rolling two red dice and making my opponent decide between 'knocked down' and ‘knocked down'.

LOW Missing my receiver roll and losing the game-tying touchdown in the last turn.

WTF Wait, the color commentator is on my team now? How did that happen?

At its core, what impresses me most about Blood Bowl is how much confidence the developers have in their source material. From showing dice roll results onscreen to the delightful complexity of the league system, every choice made focuses solely on recreating the board game that inspired it with as much fealty as possible. It's the result of developers who knew they had a good thing on their hands and had trust that the product would sell itself.

Blood Bowl 2 takes place in a bright, comedic offshoot of the otherwise fairly bleak Warhammer fantasy universe which posits that instead of endlessly warring with one another in gruesome battles, the forces of order and chaos play a football/rugby hybrid with a bogus beer company sponsoring the whole thing.

It's a little odd to single out a sports game's narrative for praise, but BB2 does an amazing job of using its single-player mode to teach the game to newbies.

Telling the story of a down-on-its-luck human team during a rebuilding year, the developers hold the players' hand through the first few matches, offering up a simplified version of the rules, while gradually layering in complexity at just the right pace.

Where a new player might balk at the sheer volume of dice rolls the game is simulating, by showing them every one of the game's systems and explaining their importance as part of the gameplay, the devs have found a way to drill the fundamentals of a pretty complex boardgame in without resorting to tons of rule text and esoterica. That's no small feat, and it's kept brisk and entertaining due to some great writing for the game's exposition fountains: Bob and Jim, the ogre and vampire commentators who keep players apprised of story developments taking place on and off the field.

Speaking of being on the field, each of the game's 'halves' are eight turns long, and each of those turns can last a maximum of four minutes. Doing the math, a total playing time of two hours would be brisk for any board game, but Blood Bowl is never actually that long due to the brilliant 'turnover' rule—simply put, moving players around the pitch, attacking the opposing team and handling the ball all require dice rolls. If a roll is failed, it means an immediate end to a player's turn, no matter how many moves are left.

This punishing ‘turnover' penalty serves to keep the game moving while also encouraging careful strategy. Is it better to get the ball moving right at the start of a turn, putting the rest of the team in danger of losing their turns, or should the linemen reposition first, knowing that a single bad roll would leave all the riskier moves unmade, and possibly leave the opposing team with a straight shot to the end zone? Every turn of Blood Bowl is a high-stakes experience, providing the kind of white-knuckle thrills one normally doesn't associate with board game adaptations.

While I'd argue that the game's graphics aren't especially important to its success, it is an attractive title. The various teams are all well-modeled, with the different player types in each race offering distinctive features that make them easy to tell apart. The 'big guys' and star players on each team are especially great, and many are impressive sights.

Unfortunately, the animation is a little less impressive, due mostly to a lack of variety. There are just a few actions that the players perform—throw, catch, tackle, fumble, kick an opponent while they're down—and each of the models has one animation routine for each. As a result, the dozens of tackles in every game look exactly the same. I found myself switching off the cinematic camera option, because there's no real joy to be found in watching the exact same hit over and over again.

Also puzzling is the developers' choice to take control of the camera away from players. This one just baffles me—the camera can be moved around the stadium, as well as zoomed in and zoomed out, but it remains at a fixed angle for no reason I can fathom. What would be the harm in letting players spin the camera around to pick the right viewpoint for a harsh hit or a scoring run?

That oddness aside, Blood Bowl 2 does a great job with its multiplayer options. Naturally it has a fully-featured league mode—it's a hallmark of the board game which allows a group of players to start ongoing competition. Teams even have to hire and train players, maintain stadiums, and figure out their team's budget from match to match.

The multi adds a whole world of depth to what was already a solid experience, and even those uninterested in getting that deep into the game will find plenty to love, as they can play all the exhibition matches they want with a bunch of pre-made teams, giving them a chance to figure out which race's playstyle suits them best.

Then there's what may be my favorite feature—the ability to view other people's matches in progress. BB2 has a browser that shows all the games currently being played online and then puts it on their screen, letting anyone become a spectator of someone else's game. I'm not normally one for watching eSports, but Blood Bowl 2 is such an inherently dramatic thing that I found myself getting drawn into someone else's action more than a few times.

Blood Bowl 2 captures everything that makes the board game great and makes it available to those not willing to shell out a hundred dollars on miniatures. The passion the developers have for their game is clear to see, and the result proves that their love was not misplaced—it's easy to see that Blood Bowl 2 is one of the greatest board game translations ever. Rating: 9 out of 10

Parents: According to the ESRB, this game contains alcohol reference, blood and gore, language, mild suggestive themes, violence. Nope. It's about drunken footballers murdering one another. There's violence galore, drugs and drinking, suggestive costumes. Heck, blood is right there in the title. Leave this one for the older teens, okay?

Deaf & Hard of Hearing: All of the story sections are fully subtitled, and there are no audio cues! It's perfect!