Whalers On The Moon 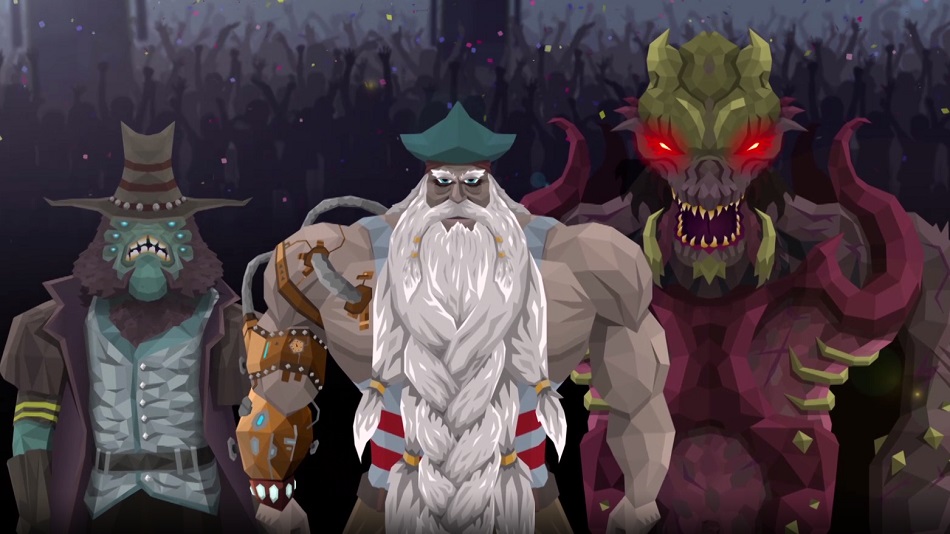 WTF The character who’s in the competition for space perfume.

If I was able to give one message to all the developers working on top-down shooters, it would be this:

I know you’re proud of your 2D pixel art, but please, just pull the camera back.

A twin-stick shooter set in a bizarre future where aliens and cyborgs compete to see who can land the biggest space monster, Blacksea Odyssey is so close to amazing that it can almost reach out and touch it. Sadly, a great setting, wonderful art, and a solid roguelite structure are all undercut by balance issues that cripple everything it attempts to accomplish.

Players take on the role of the Old Man (who the developers seem to have conflated with Ahab) who enters the Blacksea Odyssey competition hoping to track down the space beast that cost him an arm. There are also other characters and weapons to unlock by beating bosses and completing challenges, each one allowing for meaningful changes to the way the player approaches combat.

After selecting which boss they want to chase down from a bounty list, the player is sent to one of four space biomes. At any point they can challenge the boss, but if they want to have a chance of beating it, they’re better off going to the four enemy zones on each map where they can fight small foes to collect coins and powerful runes. 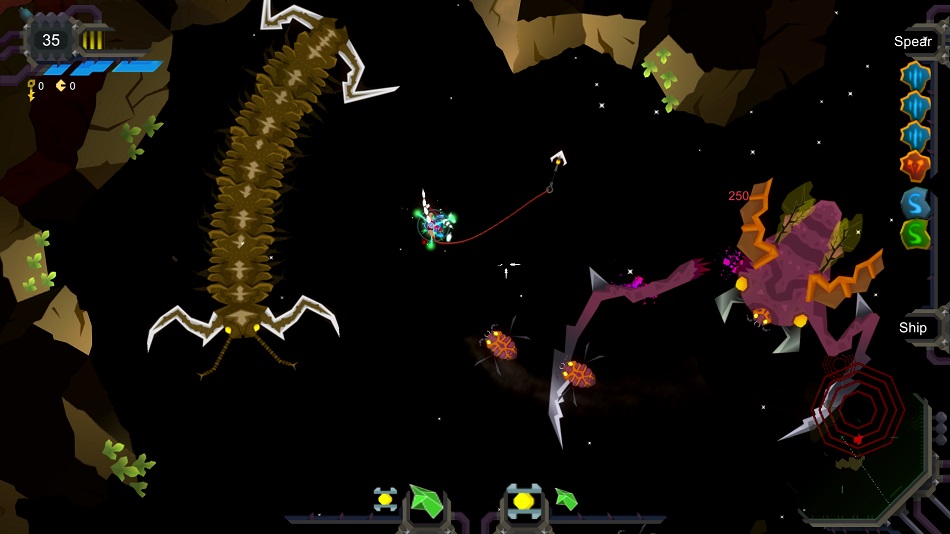 These randomly generated runes are the only way of upgrading ships, and the player can only equip eight at a time – four for the ship, four for their spear – forcing them to make hard choices about exactly how they want to play. Do they want spears that explode on impact, or ones that leave a deadly path in their wake? Should their ship speed quickly around the playfield, or fire off projectiles to knock back foes?

To a certain extent, what they want doesn’t matter – the runes are randomly distributed, and the stock for sale in the between-mission store is as randomized as any chest. Because of this, players largely have to cross their fingers and pray for a good draw because it’s impossible to progress without the right gear.

This brings me to Blacksea‘s bosses, which manage to be both the game’s greatest asset and its biggest problem.

First, the good parts – they all look fantastic. They’re gigantic and imposing, each one armed with multiple attack patterns that must be learned and countered. This is where the player’s harpoon skills come into play – in addition to throwing spears, players can charge up a harpoon to grab onto foes. Damage parts on an enemy, and they begin to flash. Once flashing, harpoon them and they’ll come off to deal big damage and cripple the enemy. Since each boss fight is a multi-stage affair, the player gradually tears their foes to pieces. It’s a process that always feels like an ordeal when it’s happening and an accomplishment when it’s over.

Now, for the bad parts. Blacksea suffers from a problem endemic to twin-stick shooter developers — they’ve never learned how to deal with widescreen televisions and monitors. The 16×9 format just baffles them, and it leads to no end of troubles. 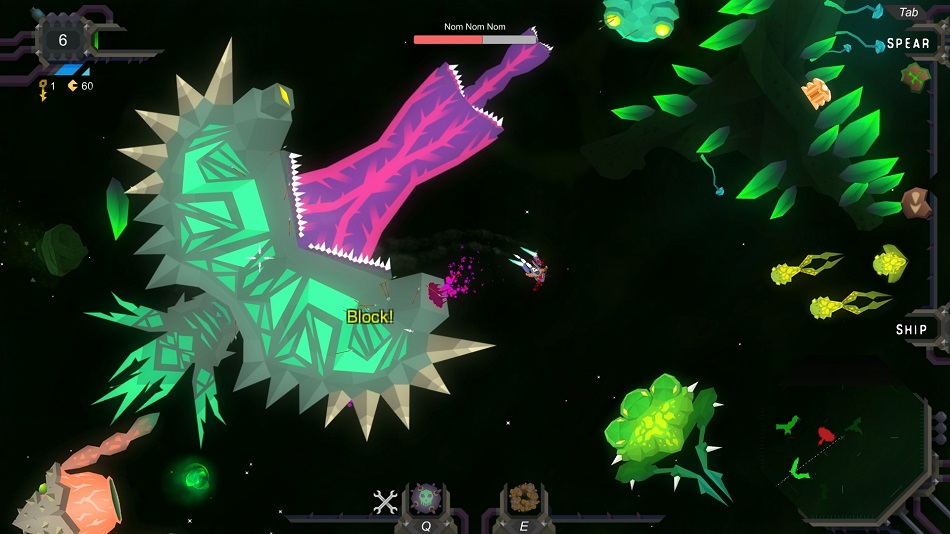 Enemies are activated when they’re at the edge of the screen – they’ll start shooting or charging the minute they notice the player. The problem is that activation distance to the north and south is the same as the east and west. While players have a chance of seeing enemies approaching at the sides, attacks from above or below will seem to appear out of nowhere. Considering that there are numerous enemies that can stunlock a player from offscreen, one of these surprise attacks that can’t be predicted can end a 40-minute run in a matter of seconds. It’s terrible.

As frustrating as this is for regular enemies, with bosses it’s far worse. Nearly every boss takes up more space than the screen, so the player will only ever be able to focus on one part of them at a time. They’re also surprisingly nimble for their size, forcing the player to constantly dodge around them. This would work fine except that the maps are littered with stone or coral walls that block the player but allow the bosses to pass through without any trouble at all. Players can use their boosts to smash through the rock, but boosts take a while to recharge and it’s important keep them for dodging the bosses’ rushes.

Oddly, the three super-bosses I encountered, while quite difficult, felt far more fair since each of those encounters begins with the boss moving the fight out to empty space where the player can focus on bullet-hell evasion without worrying about getting trapped between a flailing tentacle and a wall. On the other hand, these huge super-bosses are the worst offenders in the zoomed-in camera department, constantly spamming attacks from offscreen.

In addition to these design problems, the game is beset by bugs. It would lock up when I’d completed a challenge and force me to reset and losing the spear I’d just earned. Sometimes my ship would lose the ability to cut through rock, trapping me next to bosses. The Bounty Board has a nasty habit of disappearing, or sending me after the wrong boss. A particularly strange bug had me completing the game and unlocking a bonus spear after dying three times in the same session. Occasionally I’d lose the ability to attack. These are the kind of things that might well get patched out by the time this game is released, but then again, it’s been out for two years on PC, so who knows?

If Blacksea Odyssey worked the way it should, its deadly monsters with complex attack patterns and abilities would pose a significant, enjoyable challenge. Unfortunately, the current level of “challenge” comes from severe camera issues, poor design and too many bugs. Stick a harpoon in it and toss the corpse out into the void of space. Rating: 3.5 out of 10

Disclosures: This game is developed by Blacksea Odyssey and published Spiral Summit Games. It is currently available on PS4, PC, and XBO. This copy of the game was obtained via publisher and reviewed on the PS4 Pro. Approximately 15 hours of play were devoted to the single-player mode, and the game was not completed.

Parents: According to the ESRB, this game is rated T and contains Violence and Blood. The game is all about tearing sea creatures to pieces, and watching their pink/purple blood ooze out into the void. By top-down shooter standards it’s fairly brutal, and while they’re certainly monstrous, it’s just a game about hunting animals..

Colorblind Modes: There are no colorblind modes in the available in the options.

Deaf & Hard of Hearing Gamers: There’s just one audio cue of note – when enemies drop keys upon death, a special chime plays. There is no visual accompaniment other than the appearance of the key on the screen. So, if enemies die offscreen and drop a key, you won’t know that a key has dropped. 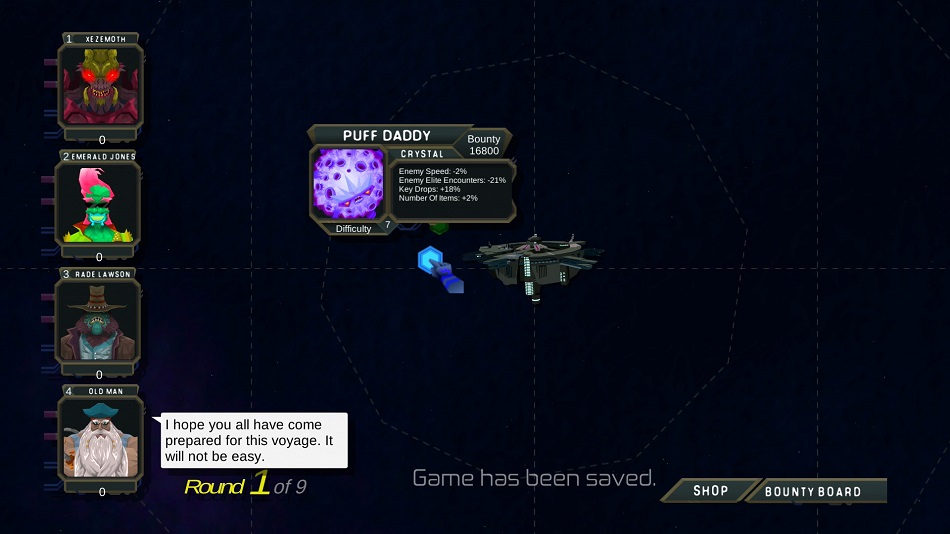 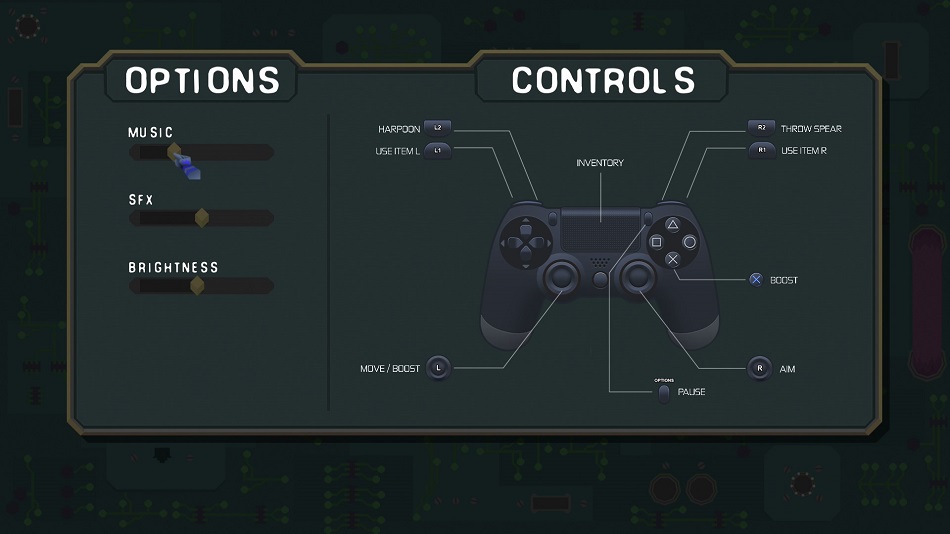