What's happened to Traveler's Tales? Coming out of the relative obscurity of developing licensed games and children's entertainments, they produced Lego Star Wars, pulling off the dual miracle of making the best Star Wars and Lego game ever, all at the same time. Then they proceeded to not screw things up cataclysmically by releasing The Original Trilogy, which succeeded in being an improvement over the first game in every possible way. So my hopes were pretty high when I found out that they were responsible for Bionicle Heroes. After all, it was Travelers' Tales back with Lego, what could possibly go wrong? Everything, it turns out. Everything can go wrong. Everything but the Lego.

A third-person shooter, Bionicle Heroes is set in a bizarre world where a heroic robot puts on masks to gain the powers of element-themed robots, then uses those abilities to fight a horde of presumably evil robots. Apparently it all has something to do with Polynesian mythology, but I'm not exactly sure how, because the game's manual is sparse in offering any details, and the game itself is virtually plotless, offering no narrative of any kind, and allowing players to tackle the various worlds almost without restriction. It's up to the player to explore these levels and find their way past each obstacle. By which I mean walk down restrictively narrow pathways and shoot literally everything that populates the landscape. 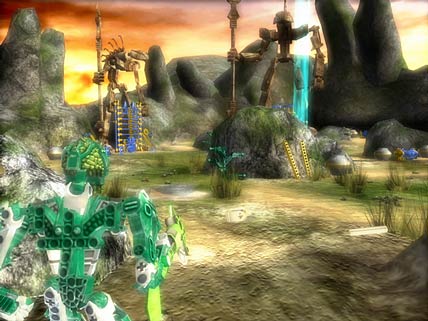 This utter simplicity is somewhat understandable, as this is clearly meant to be a children's game, but what's much less excusable is just how uninspired and dull the majority of the gameplay is. There's simple and then there's insultingly easy. This is perhaps the first shooting game I've ever seen that requires no aiming of any kind. The auto-aim is so overwhelming that I couldn't pull a trigger without the shot automatically tracking towards the nearest opponent. The controls offer a lock-on feature, but I can't imagine ever needing to use it. Heck, it's impossible to even blow apart the bonus-coin-filled objects that fill the levels without first killing every enemy in the area. There's accessible, and then there's just insulting. The worst part is that the player can't even just zip through the game quickly, getting it over with. No, several times per level the path is blocked by a pile of golden rubble. The only way to shift this rubble is by entering into 'hero mode', where the main robot turns gold, and becomes invulnerable (not that he wasn't close enough already). How does one enter this hero mode? That's right, by shooting a whole lot of enemies.

Another strike against the game is the repetition that fills every level. With the walking speed of the player character falling neatly into the category of 'achingly slow', it's frustrating to watch him lumbering around the surprisingly long levels. Sure, blasting enemies helps pass the time a little, but the lack of challenge involved in doing so keeps the game from ever reaching a point where it could be described as entertaining. Making the whole process doubly frustrating is the fact that each level is meant to be replayed at least once—as with the Star Wars Lego games, each level is filled with items and locations that can't be found until certain characters and abilities can be unlocked. In Star Wars this wasn't such a chore, because the levels were brisk and entertaining, and with characters able to nimbly leap and zip around, rarely did it take more than a couple of minutes to find a dark force door to open or cubbyhole to slip through. Bionicle's levels can take up to fifteen minutes to walk through—making the prospect of replaying them more of a chore than a pleasure. Add the fact that nearly every level opens with an unskippable movie and it almost seemed like the developers were trying to punish me for continuing to play their game. 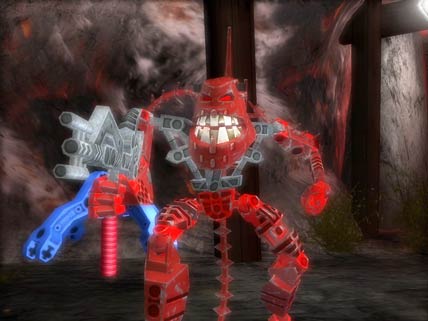 For all its problems, though, this is still a Lego game, and therein lies its one saving grace. The Lego content is every bit as entertaining here as it was in the Star Wars titles. Once again, finding piles of Lego and then holding down a button to assemble them into useful structures is an integral part of gameplay. Here, though, the assembling seems to be going at a slower pace, yet with far more complex details. Instead of simple brick constructions, everything in Bionicle Heroes seems to be made of elaborate rod-and-socket pieces, and watching everything carefully interlock was a fun, almost hypnotic experience. Is it the kind of fun one generally expects to get from a screensaver rather than a videogame? Oh, absolutely, but at least there's some fun to be had, somewhere in the game.

So once again, Traveler's Tales gets the Lego right, only this time they screw up everything but. Of course, now that Lego games are a marketable brand to people over the age of eight, they're going to start coming down the pipeline fast and furious. Later this year both Batman and Indiana Jones are getting the Lego treatment. I used to be excited about this prospect, but after seeing just how spectacularly TT can drop the ball, I'm left doubtful about their ability to deliver another great game. After all, neither of those characters possess either Jedi or robot powers, so the link to assembling-Lego-as-gameplay is getting increasingly tenuous. If they drop that, the one brilliant constant that's shone through all their Lego titles, then 2008 might play host to a few more Bionicles, rather than Star Warses, and that wouldn't be good for anyone. Rating: 2 out of 10

Disclaimer: This review is based on the Xbox360 version of the game.