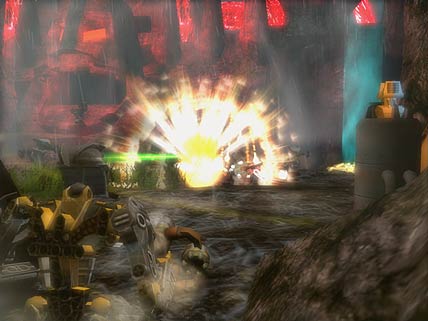 Parents should have no trouble with their children playing this game, and it's kind of a natural choice. Yes, it offers little more than ceaseless violence, but it's the kind of utterly harmless violence that's prevalent in cartoons. The Lego angle also makes it a good choice for kids, as it may inspire them to take their Lego-building up to the next level.

Fans of Lego Star Wars will be disappointed in Traveler's Tales's other entry in the Lego genre. It offers none of the variety or wit that those games possessed, and gets bogged down in repetitiveness very quickly. If you're looking for more Lego fun, wait for Indiana Jones and Batman later this year.

Deaf and Hard of Hearing gamers will be fine with the game. There's no story or dialogue to subtitle, and all instructions are printed clearly on the screen. There are no significant audio cues, and an onscreen map helpfully points out the location of every objective.