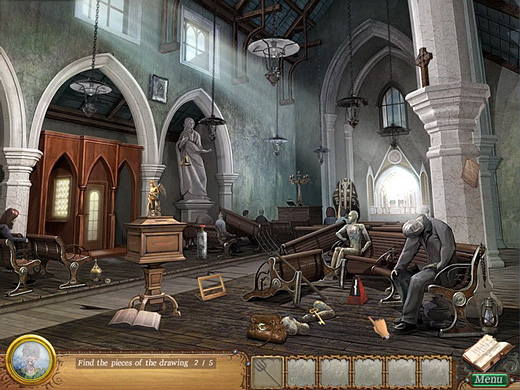 HIGH It's off to the hoosegow with you, witch!

WTF Now what should I do with this giant voodoo doll… I know, I'll dress it up like an evil clown!

In this sequel to Behind the Reflection (which, full disclosure, I haven't played), the Witch has escaped from the prison she was taken to at the end of the last game, and once again stolen the soul of the protagonist's son. To to save the day, the player's character will be forced to travel to a series of historical and fantasy-based lands, helping the denizens trapped therein and looking for clues about her son's whereabouts.

Behind the Reflection 2 offers quite a mixed bag in this respect. There are two types of item hunting sequences in the game. The first and more naturalistic type asks the player to overcome an obstacle in the environment by finding eight items scattered realistically around the area. The second is, of course, the de rigueur "hidden objects screen" in which the player has to find one of the aforementioned eight items among a sea of nonsense, and also locate a dozen other items for no particular reason.

Simply offering two different styles of hidden object searches feels like a breath of fresh air, but the design falters over the length of the game, as the items that need to be located become more and more incongruous and obviously mismatched with their surroundings. Towards the end I found myself in a prison cell baffled by the sight of a multitude of coins tossed haphazardly around the room, with no consideration given to perspective or their proper relative size. Instead of being challenged to scour the room for the items necessary to solve a puzzle, I was left wondering how long it was going to be before someone asked me to grab a bunch of dinner plate sized nickels.

Other than the standard "here is a mess, grab twelve things," the game does a remarkably good job of justifying its search sequences. As always, there's a contrived elaborateness to the manner in which video game characters hide even their most basic possessions, but a wide variety in the kind of puzzles presented keep these sequences from ever growing too dull. While many of the searches may seem arbitrary—find a bunch of flowers to start a sliding block puzzle—quite a few of them are logical or even clever. After being told that I need to find something within a beehive, I then scour the area looking for the tools necessary to safely open it. 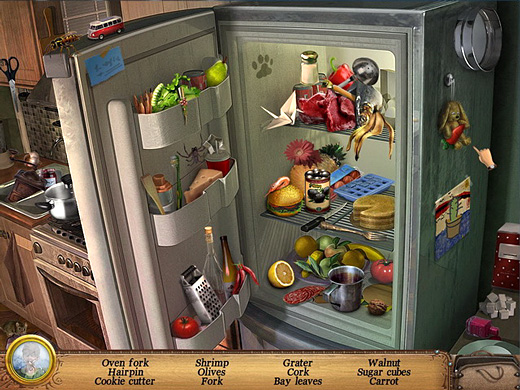 The only real drawback is that the game sometimes doesn't play fair with these searches. While generally the eight items required to solve any problem are located in that screen where the problem exists, a few times one of the items will be hidden in another location. The problem is that there's no way to tell that the item is going to be in another location—I only realized what was going on when, after five minutes of fruitless searching, I finally gave up and clicked on the hint button, which directed me to another screen.

Behind the Reflection 2 is certainly visually accomplished, with attractive looking levels and relatively fair object placement, but the various parts never blend together to create a consistent experience. While the plot's explanation for why I'm jumping through time and space makes perfect sense—I'm visiting the various locations where the witch has interdimensional influence—there's no common theme or tone running through them, so the hodgepodge of locations ends up being largely unsatisfying. The visit to seventeenth century Salem makes sense given the game's premise, but why did the sequence that preceded it involve me helping out a cartoonish talking tree by bringing him a goldfish? And why is it proceeded by visit to a bright and cheerful mansion, complete with ghost butler?

These issues aren't the game's only problem though, as Behind the Reflection 2 is, by a wide margin, the buggiest hidden object game I've ever played. I can't really fault the game for the way one puzzle became unbeatable after my computer crashed, but the ability to jump to the beginning of that world rather than being forced to start the whole thing over would've been a nice feature. I can, however, fault the game for the two puzzles that stopped responding to mouse clicks midway through solving them. It's lucky that the game offers players the opportunity to skip any puzzle. Without that option, I may not never have been able to finish it.

Behind the Reflection 2 offers a few interesting twists to the HOG genre, but in the end the bugginess and lack of any kind of overarching theme keep it from standing apart from the crowd. That's not to say the game doesn't have its charms, merely that it never really does anything interesting with the bizarre situations it establishes.

That prison I mentioned in the introduction, the one the witch escapes? That's not a magical prison. She's not trapped behind a mirror, or in a statue or anything. The last shot in the plot recap that opens the game is of the witch being driven away from the heroine's house, handcuffed in the back seat of a police car. We're promised a weird world of (not entirely serious) urban fantasy, and the game delivers incongruous setpieces that never gel. Maybe Behind the Reflection 3 will finally figure this thing out. Rating: 5.5 out of 10.


Disclosures: This game was obtained via publisher and reviewed on the PC. Approximately 5 hours of play was devoted to single-player modes (completed 1.5x times).

Parents: Although not officially rated by the ESRB, I can report that this game contains violence, disturbing imagery, alcohol and tobacco references. While not continuously unpleasant, the game features a number of disturbing images, including implied torture, dead bodies, and a woman trapped in stocks. Definitely restrict this one to old teens, if at all.

Deaf & Hard of Hearing: Like most hidden object games, Behind the Reflection features no vital audio cues, although you will be missing out on some nicely atmospheric music and sound effects. All dialogue is subtitled.