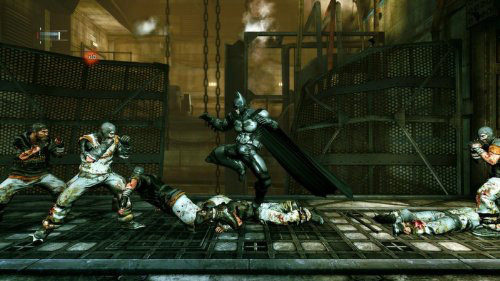 HIGH I just killed two guys and Batman isn't whining about it! Amazing!

LOW I kept dying from environmental damage during the Joker's 'defeated' cut-scene.

WTF Is this whole thing just an ad for Suicide Squad?

First off, the map, which caused Brad such consternation in his main review, has been fixed. Gone is the overhead view, replaced by a 3D rendering of the game's warren of interlocking hallways that makes it clear exactly where in the prison Batman and his targets are. It's not completely free of hiccups, though—due to the game's mobile camera and Batman's ability to shift into the background, there are times when moving 'right' on the screen is translated to 'left' on the map. That aside, the map now helps navigation, rather than hindering it.

Now, as for the rest of game…

Set a few months after the events of Arkham Origins, Blackgate

sees Batman attempting to quell an insurrection within the swiss-cheese-esque walls of Gotham's premiere penal facility.

In a departure from the fairly linear structure of the previous Arkham games, Blackgate allows players to decide in which order they'd like to take on the game's three bosses: Black Mask, Joker, Penguin. Each one offers a different set of challenges and unlockable gadget track, and it's this decision that makes the game feel most like a Metroidvania. The developers have done a great job of teasing hard-to-reach areas in each of the villain's domains. No matter where I looked, I'd constantly be noticing areas that were unreachable at the moment, leading to a wonderful sense of satisfaction when I was finally able to return with the tech needed to unlock one of the many, many secret crates.

Blackgate offers some stellar navigational puzzles, all of which fit neatly into the creeping Batman aesthetic. In a perfect example of using gameplay to further a theme, Batman is forever slinking under floor panels and crouching atop roofs, acting as a mysterious saboteur single-handedly foiling the plans of his vastly overpowered foes. The decrepit art design also does a wonderful job of reinforcing the mood, with crumbling concrete cells, filthy sewers, and a burning office complex each having distinct feels and demanding different tactics.

However, the game stumbles when it tries to directly integrate key gameplay mechanics from the other Arkham titles—namely the fighting and predator modes.

With Arkham Asylum setting an incredibly high bar for video game melee combat, the developers were always going to struggle to strip out one of the dimensions without compromising, and the strain shows. While the fights are still functional, they're completely devoid of the effortless style of their 3D cousins. The controls are unresponsive, stunning and dodging over foes is surprisingly finicky, and because of a few mistakes, 'ground pounds' flat-out don't work. The fighting is a mess, but since there's much less of it than in the main Arkham games, it can be overlooked.

What can't be overlooked are the terrible predator sequences, which are a flat-out disaster. Without the plethora of hiding places and Batman's clever takedown techniques available, all of these sequences boil down to hiding on a piece of wall or under a grate until everyone's turned the other way, then taking a guy down and repeating until they're all gone. It's more tedious than anything else, which I think the developers noticed since there are very few of these sequences in the game.

The story isn't anything special, notable only for how incomplete it seems—almost as if it's nothing more than a prologue. Much of the promotion for Arkham Origins focused on the fact that Deathstroke was in the game, yet his appearance is little more than a cameo designed to familiarize gamers with him and other characters who might join Deathstroke in a hypothetical Suicide Squad game.

is a solid, if somewhat underwhelming entry in the Metroidvania genre. The exploration feels complex and rewarding, with the puzzles never becoming so hard that they lead to frustration. While the combat and preying aren't great, there's not enough of either to spoil the experience. It was a bit of a risk moving one of gaming's highest-profile franchises into an entirely new genre, and I can only hope that despite its rough spots, Blackgate's moderate success will encourage publishers to take further chances in the future. Rating: 6.5 out of 10


Disclosures: This game was obtained via publisher and reviewed on the PS3. Approximately 10 hours of play was devoted to single-player modes, and the game was completed.