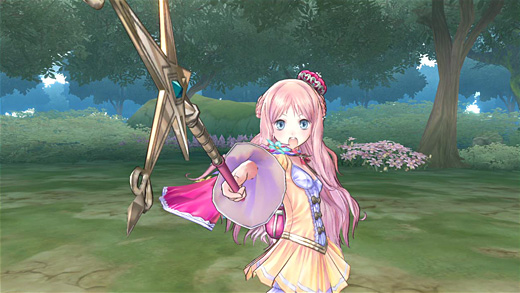 HIGH Seeing what finally became of the kingdom I worked so hard to build.

LOW I just want a Lvl2 fire resistant item, and I know it's here somewhere!

It's a little strange to see a game as positive and upbeat as Atelier Meruru: The Apprentice of Arland

, especially nestled in the Japanese role-playing game (JRPG) genre. No world-ending threats, no home villages burned to the ground, and a distinct lack of alien gods that turn out to be computers that turn out to be the ghost of the planet. Atelier Meruru tells the story of a girl who dreams of using her passion to make the world a better place, then asks the player to help make those dreams a reality. Also, a couple of dragons show up over the course of the game.

Meruru is the princess of Arls, a small northern nation which is just three years from merging with (and becoming a democracy like) its larger neighbour Arland. Rather than simply helping her father oversee their country's subsumation, Meruru wants to pursue her interest in Alchemy, so she convinces her father that it can help their country develop into a great nation—one that deserves to be treated as Arland's partner, rather than simply a province.

Over the course of the game, the player is tasked with achieving this goal by fulfilling requests that come from all over the kingdom. These can range from slaying powerful monsters to building fortifications, all the way to creating a dozen sandbags so that a swamp can be properly drained and its water redirected to the capital. All of this is achieved through the game's two main modes—JRPG exploration/combat and item synthesis/time management.

The exploration and combat are simplified enough that even players with no previous genre experience should be able to pick them up without any trouble. Rather than an explorable overworld, the important points are marked with dots, and the player may only travel along set paths between them. Once they arrive, players are able to walk around small areas, fighting monsters and harvesting components for the other half of the game. 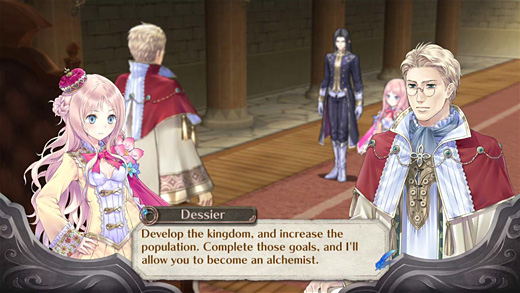 The combat is tuned and uncomplicated, with the player controlling Meruru and up to two sidekicks who each have access to a variety of special attacks and a single ultimate move. If that wasn't streamlined enough, there's even a super-clear "move order" bar on the right side of the screen, letting the player know not only in which order every character will strike, but also what position they'll be moved to after deciding on an action. It all works spectacularly well, and if it's not the most complex or engrossing JRPG combat, it's quick, fun, and certainly perfectly in-keeping with the  game's light tone.

Collecting components, on the other hand, can be a little frustrating early on in the game, since until about halfway through the player is only allowed to carry a limited number of items at a time. This forced limit causes travel back and forth from the alchemy workshop to the field a little more than seems necessary. Fortunately, the game's alchemy mode really shines.

The player is equipped with a cauldron and a list of items that can by synthesized—it's up to them to find or purchase the components necessary in order to make the items that satisfy people's requests. Not only is the synthesizing itself fun, with the player constantly unlocking bigger and better tools and ingredients to produce, but the whole thing is both deep and incredibly user friendly. Its user-friendliness comes in the sense that the developer seems to know exactly how much hand-holding the player would require to get the hang of synthesis. The depth comes in because every one of the game's quests gives the choice between mass-producing a lot of one item or carefully crafting a smaller number that have specific traits. It requires the player to carefully select which components to use.

Even as more complex features are dropped in, such as homonculi who can gather resources or perform simple synthesis when ordered, or a shop that can perfectly recreate almost anything the player can make (for a price), the system never gets overwhelming or unwieldy.

The one drawback is an inability to search for specific traits—completing quests as quickly as possible is important, since the player has just three years to complete all their tasks, and each synthesis takes at least a day to perform. I was forced too often to spend a few minutes scrolling through a list of hundreds of items, desperately searching for the one specific component I needed. It's too bad this wasn't added as a search option, since in all other respects the menus are well-designed and a pleasure to use. Well, except for the fact that the "alphabetize" function seems to be based on the original Japanese names of things, and is therefore not much use for people who expect "apples" to necessarily come before "blue fruit." 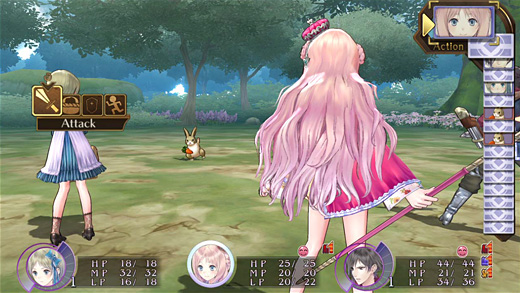 The game's plot is also satisfying, offering an impressive number of multiple endings and branching plotlines. I'm not going to spoil anything, but at a certain point in Arls's development, Meruru is asked to decide just how she'd like the kingdom to develop. The decisions made thereafter can take the player down a few different pathways.

Also incredibly helpful is the game's "friendship" system, which takes all the frustration and guesswork out of JRPG subplots. I've reviewed a few of these games now, and even though I always beat them, once they're over I'm inevitably presented with the fact that I've missed more than half of the plot because there was no way for me to know I was supposed to be at a certain place at a certain time with a specific party member.

Not so with Atelier Meruru—there are a host of characters available to be Meruru's sidekicks, each one with their own plotlines. The game is kind enough to provide each character with a numbered "friendship level", as well as instructions for how to raise that level. The only drawback is that there simply isn't enough time in the first playthrough to get everyone up to a sufficiently high level. Atelier Meruru even manages to make that one drawback as painless as possible—over the course of the game the player can build high-end armour and weapons, as well as development gear that makes traveling and collecting components a breeze. While a New game+ resets the player's levels and inventory, they're allowed to keep all their equipment—which removes most of the difficulty of the game's main plot challenges,  giving the player ample time to explore the world, get to know all their sidekicks a little better, and decide which ending they want to chase.

Perhaps that's all I needed to say about Atelier Meruru: The Apprentice of Arland

in the first place: The game's tone is so infectiously upbeat, the characters so engaging, and the world so enthralling that it demanded I go back for a second trip, even if that was going to take another 30-50 hours. Atelier Meruru is so wonderful that it became the first JRPG since Final Fantasy VII that I've played through more than once. Simple enough for anyone to play, but deep enough to offer 100+ hours worth of gameplay, Atelier Meruru is a great title full stop. Rating: 9.5 out of 10.


Disclosures: This game was obtained via publisher and reviewed on the PS3. Approximately 90 hours of play was devoted to single-player modes (completed 2 times).

Parents: According to the ESRB, this game contains: fantasy violence, mild language, partial nudity, suggestive themes and use of alcohol. You should be mostly fine with their children playing the game. It's incredibly positive and winning, and almost entirely lacking in darkness or realistic violence. There are a few things you'll want to be wary of, however—in addition to a number of references to drinking there are some cheesecake shots of the female cast, but nothing worse than partial nudity. Also, and I don't even know if this really deserves a warning, but just in case—there's plenty of references to same-sex crushes and relationships among the cast. I thought it was uncommon enough to be worth bringing up.

Deaf & Hard of Hearing: You'll have no problems. It's a JRPG that allows players to choose between English and the original Japanese voices—of course everything is subtitled.