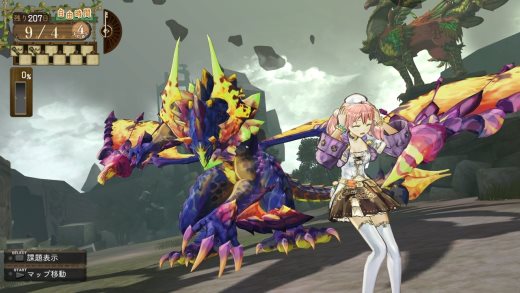 HIGH Realizing that I'd become a good enough alchemist to craft the most powerful equipment in the game.

LOW Okay, I know that secret boss is a giant wolf with cosmic abilities, but he's still a little overpowered.

WTF Did the game just take time out for a competitive eating subplot?

After the underwhelming Ayesha I was a little worried for the future of the Atelier series, though that may have been a little presumptuous of me, seeing as I was basing that fear entirely on the 13th and 14th titles in the franchise.

has not only reaffirmed my confidence in the makers of Atelier Meruru, the best JRPG I've played in years, but amazed me with their responsiveness and self-awareness. Everything that didn't work in Ayesha has been discarded outright, things that were great about Meruru have been restored, and the alchemy system has been tweaked and redesigned to the point where it feels essentially perfect.

Set a few years after Atelier Ayesha, this new installment moves the action from the pleasant pastoral setting of the previous game out to the frontier. Centered around the city of Colseit, the game tells the story of Escha and Logy, two alchemists who are just starting work for the national government. Colseit, like so many cities in this world, is built on and around the ruins of a long-destroyed megalopolis, and the player's job is to assist the local population in exploring the ruins and keeping their villages alive.

In a new twist for the series, the player gets to choose which of the characters they'll be controlling for the length of the story—while both characters will always be in the party, the decision will affect which parts of the plot they witness, and the main character always defaults to being active in combat. I played the entire game with Logy, and at no time did it feel like I was getting only half of a story. I can only marvel at how much raw story content the game must have if there's an equivalent number of Escha-only dialogue scenes.

The story this time is deceptively low-stakes at first—initial missions are simple affairs to repair technology and map ruins—but the game's real end-point reveals itself quickly enough. After establishing the existence of an ancient ruin hovering above the city and surrounded by a perpetual maelstrom of high winds and stone debris, the player is assigned a multi-stage task to build an airship sturdy enough to penetrate the shield.

Full disclosure, this game continues the series' obsession with putting a clock on the player's adventures, but it's much less stressful than in previous titles. Every year is broken down into three parts, and each of those sections has a single not-too-diffficult task to be completed, along with 24 other minor objectives with rewards for raising Escha and Logy's government service level and unlocking upgrades to their alchemical and combat skills.

It's all very forgiving. Most of the crucial jobs can be completed within a week or two of game time, so I always found myself with around three months to level up and/or chase the main plot. It becomes clear early on that finishing the airship is what's going to unlock the game's bonus year, where all the endgame content takes place. Armed with that knowledge, it's relatively easy for players to prioritize resources and make sure that they'll be able to see most of what the game has to offer in a single playthrough.

In an unusually fair note, not only does the extra year offer a robust amount of endgame content, players are given the chance to hunt down three secret bosses and complete any side objectives they missed out on during the first three years.

In my review of Atelier Ayesha, I suspected that it was kicking off an interesting story, and that guess proved correct. Escha & Logy expands on the previous game's themes of the pursuit of technology without thought to the consequences. While this is clearly the middle part of a story, we do get some interesting details about what might have been the cause of the world's current state, and even learn that one of the heroes of the previous game is this world's rough equivalent of the Unabomber.

Even better than the stellar plot is the way the alchemy system has been overhauled. Players still gather reagents in the wild and then combine them to create effects, but a completely revamped skill system has made the whole thing far more accessible than it's ever been in the past.

Previously, players had to juggle the cost of ingredients against their quality and what elemental traits they imbued items with. It was all so incredibly complicated that my fellow writer Darren Forman's head literally exploded when trying to make use of it. Every item now comes with a certain number of elemental points which can be spent on a selection of skills with a wide variety of effects, each of which has a clearly stated and extremely useful purpose. The game does an incredibly good job of gradually introducing the different elements of alchemy, so by the time Escha was a top-level alchemist, it wasn't just an abstract level number—I actually felt capable of using the materials and techniques to make the highest-level items and the best possible versions of them.

The game's combat has been similarly overhauled, this time by organizing it around the principle of having a large party. The 'friend' system that previously forced players to constantly switch their group around to see side stories has been removed. Now once someone joins the group, they're in it for the duration. The player is also  now allowed to bring up to six characters into the game's turn-based fights, with three in the front row and three in the back. It's a great mechanic that gradually grows in power over the length of the game until players are performing six-character chains that end with apocalyptically huge attacks.

There's been another game-changing adjustment to the series' combat—in previous titles alchemists were differentiated from other characters because they could use items in combat, while other fighters had incredibly powerful super moves. Now the two alchemists can team up to perform a 'double draw' in which they use two items in succession. Using an item normally triggers one animation, while using that item as the second attack triggers an additional, more impressive visual. I was already blown away by the amount of work it took to give every attack item two separate graphics, and then I discovered that if the double draw is performed at the end of an attack chain, there's even a third effect.

With the best plot, combat and alchemy yet, Atelier Escha & Logy

has dispelled any fears I had about this series going forward. It's another game about likeable characters trying to improve the lives of their countrypeople through technology, but it's one that actually takes the time to consider the dangers of over-reliance on the artificial. It's not perfect, but the flaws are so minor that I can't help but grade this the same as I did Meruru—a JRPG experience that anyone with even the most passing interest in the genre owes it to themselves to play. Rating: 9.5 out of 10


Disclosures: This game was obtained via publisher and reviewed on the PS3. Approximately 60 hours of play was devoted to single-player modes (completed 1 time).

Parents: According to the ESRB, this game contains fantasy violence, language, mild suggestive themes, use of alcohol. It's just as generally youth-appropriate as previous games in the series. The violence is bloodless and bright, with the harmless animal and slag foes of the previous game making a reappearance, along with a few types of dragons. Nothing creepy there. For questionable content, I didn't see any really harsh language, and there didn't even seem to be a bath scene! Although I didn't actually play Escha's storyline, so I can't swear to that. While there's still some people drinking at the local bar, the character who smoked like a chimney last time doesn't appear in this game.

Deaf & Hard of Hearing: You will be fine. It's a JRPG that allows players to choose between English and the original Japanese voices – of course everything is subtitled.

I really loved the previous Atelier Ayesha game and i’m excited to get this new one. 🙂