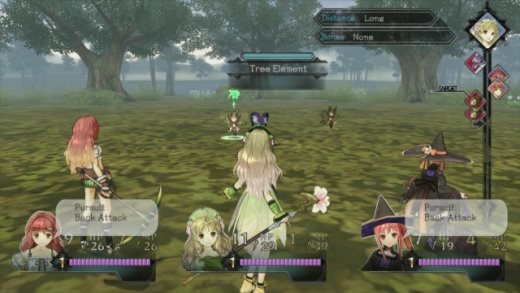 HIGH Finally getting into a duel with that dragon.

WTF That's the most adorable funeral I've ever attended!

After being blown away by Atelier Meruru I was extremely excited for the Atelier series to kick off a new trilogy in a new setting. I was hoping to get more of the same amazing gameplay, but what I actually got was an overcomplicated formula, a smaller world, and a maddeningly vague central quest. Atelier Ayesha

may feature gorgeous art design and an intriguing setting, but it doesn't feel like much of a step forward for the franchise.

This time around, the game's main character is the amazingly-named Ayesha Altugle, a rural pharmacist who spends her days crafting medicines and mourning the loss of her sister who mysteriously disappeared. Ayesha is so isolated from the greater world that it isn't until a chance meeting with a powerful wandering alchemist that she even has the slightest idea what to call her chosen profession. After learning a little about alchemy and its various powers, Ayesha sets off on a great journey to rescue her sister and help all of her friends with their various side-stories.

As in Meruru, this is accomplished by traveling to locations, scouring them for materials and slaying all present monsters, then returning home to use those ingredients to synthesize the items people have requested. This time around, however, alchemy has gotten weirdly inaccessible.

Items are divided up by three criteria—overall quality, inherent traits, and what elemental power they offer. At first item synthesis is just a matter of trying to get the quality as high as possible, but by the end I was required to deliver specific traits and powers, and this could only be accomplished using special skills that go woefully underexplained. I managed to muddle through eventually, but I was left with the sense that I'd be doing much better if I could have just wrapped my head around the skill system.

Also troubling is the game's structure and plot.

Instead of fulfilling requests designed to develop a nation (as in Meruru), Ayesha just has one central mission to rescue her sister, and the only time limit is the three years the game lasts.  Where Meruru's constant deadlines forced the player to always have one eye on the overall goals, Ayesha makes players feel like they've got all the time in the world. This proves to be a dangerous assumption to make, since actually completing the main quest is a complicated and time-consuming task, and too much time spent admiring the scenery can easily force the player into the worst ending.

As if those things weren't enough to deal with, then there are the weird design missteps that just don't make sense.For example, there are jobs to be done around the game's three towns, but no central job list like the one in Meruru. As a result, players are forced so search every area of each town, looking for people who need items synthesized. What does adding this additional barrier add to the game?

Even worse is the game's handling of its partner characters. Ayesha can have two sidekicks at any time, but they can't be switched at will. Any time I wanted to add someone to the team, I had to actually track them down and ask them to join, and a couple of characters live ten-day walks from the main hub. In a title that requires so much time management, that's a big penalty for wanting to change up my group.

The worst mistake, however, is that the game offers no clue when or where story segments are going to take place. In order to finish sidequests (every partner character and a few NPCs have them) the player has to bring Ayesha to a certain location at a certain time when their partner reaches a certain 'friendship level'. All of this happens behind the scenes, leaving players to flit around from location to location, blindly hoping to trigger a cutscene. More than once I came home from a long journey and found myself having to cycle through every location in the hub city for twenty minutes, making sure I'd checked in with every possible person who might have a quest. There's got to be a less arduous way.

It's not all bad, however—the combat is surprisingly well-designed, allowing players to perform synchronized attacks and position characters around the field of battle. It's still turn-based jRPG combat, but there's enough complexity to the mechanics to keep things interesting.

The game's setting is also excellent, being set in the fantasy equivalent of a post-apocalyptic wasteland. In the distant past some type of alchemical cataclysm shattered the world, killing off much of the population and robbing the survivors of advanced technology. The world is populated with clues about what things used to be like, and provides interesting details about how people have managed to eke out a living in the aftermath of a great tragedy.

feels rough at times, though it remains an extremely playable jRPG. Seeing as it's the first game in a trilogy, I think players should be willing to give it the benefit of the doubt because enough time is spent setting up the world and its characters that I'm positive the developers have something interesting in store for the next entry. Rating: 7 out of 10


Disclosures: This game was obtained via retail store and reviewed on the PS3. Approximately 45 hours of play was devoted to single-player modes, and the game was completed.

Parents: According to the ESRB, this game contains fantasy violence, suggestive themes, use of alcohol and tobacco. You should be mostly fine with their children playing the game. The violence is bloodless and bright, with even the most dangerous foes never seeming too scare. As for prurient content, this is much safer than Meruru was. Is there still a bath scene? Yes, but it's far less exploitative this time around. The big sticking point will be the character Keith, the lone full-on adult in the main cast, who spends the entire length of the game smoking a cigarette, even when he's fighting. There's no way around it – like Kazuma Kiryu before him, he makes smoking look cool. Be sure to take that into account.

Deaf & Hard of Hearing: You will be fine. It's a JRPG with no fast action or audio cues – everything is written out in text form along with the voices.