If The Heat Doesn’t Get You… 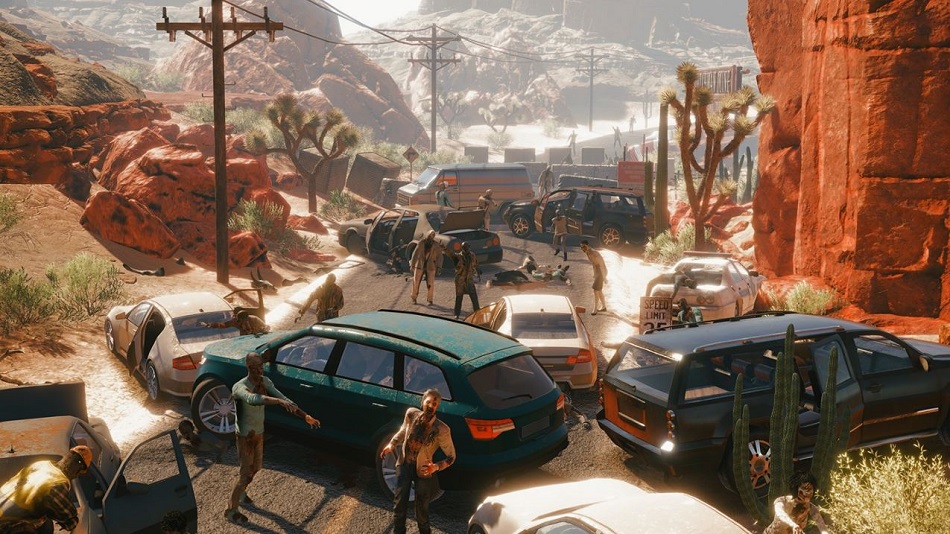 HIGH Cutting loose with an assault rifle into a crowd of moaning dead.

LOW The immensely unreliable flashlight in the mine level.

WTF How did the humans lose? They had a tank!

Arizona Sunshine is VR zombie shooting, no more, no less. The developers behind it clearly had one goal in mind – to provide players with a convincing, coherent world in which they would walk around shooting zombies in the head. There’s almost no story, no puzzle elements, and no quests beyond a couple of instances of keyfetching. There’s not much here apart from lots and lots of guns, and the zombies that can be shot in the head by using them.

This laser-focused precision is kind of glorious.

Players take on the role of a charmless oaf who’s far enough into the zombie apocalypse that the whole thing has begun to bore him. The ‘plot’ follows him on a journey to find a safe zone – not that doing so seems like much of a priority, as zombies pose a realistically small threat. They’re slow, they shamble, and a single bullet to the head can put them down – although three or four shots to the torso will do just fine as well.

Arizona Sunshine isn’t interested in adding new wrinkles to zombie mythology – there are no ‘special’ infected or super zombies to be found. A few zombies run, but by and large the game just wants to provide the definitive zombie VR experience, even if doing so breaks its own internal logic at times. For example, at one point the hero encounters a human outpost which has been overrun by the living dead, and he wonders just how that could have happened – and frankly, it’s not a bad question, given that the comically ineffectual zombies are regularly stymied by standard doors. They overcame the concrete walls and barbed-wire fences how?

However, plausibility isn’t the point here, visceral combat is, and Arizona Sunshine succeeds at that beyond any measure. 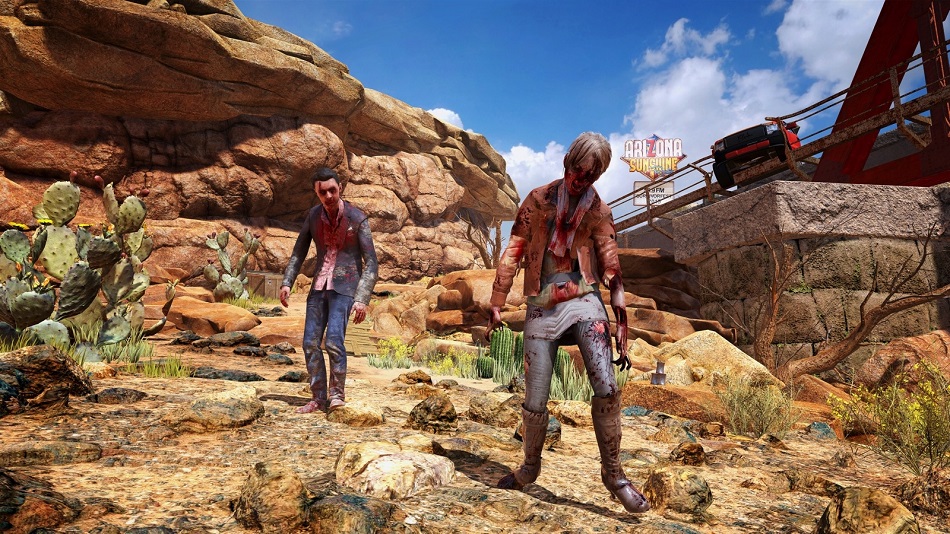 Whether using Move or Aim controllers, the guns look and feel natural, and the top-notch tracking allows players to get into the habit of casually blowing zombie skulls apart. The weapons are all based on real-world firearms, and clearly a lot of work has gone into making sure that each one sounds correct and has semi-authentic loading mechanisms — things like magazine-based weapons locking open when they’re out of bullets, forcing the player to manually eject the clip before moving the gun to their torso to simulate reloading. It’s a small detail, but by adding an extra step to the reloading process, AS convinces the player that they’re actually involved in the mechanics of gunplay, rather than simply tapping buttons.

Clearly a lot of thought has gone into the details of navigating and interacting with the world – there are scores of vehicles and buildings to search, with ammo, grenades, and health items scattered in drawers and cabinets that can be opened with button clicks or mimed motions, depending on player preference. The developers have gone the extra mile to make the game’s arid landscape believably cluttered and lived-in, and it makes the two or three hours it takes to make it through the campaign feel like it’s being spent in a real location, rather than just a series of setpieces.

Looking again at the controls, the Aim and the Move offer completely different experiences, with neither being obviously superior. Play feels is a little easier and considerably more mobile with the Aim controller, as the thumbsticks allow the player to freely move in every direction. The Move controller locks them into either teleporting around or moving straight ahead while using buttons to turn left and right.

The Aim controller feels better moving around the world, but the Moves focus on creating more realistic interaction – manual reloading, physically throwing grenades, pulling levers. All the things Aim users accomplish with the press of a button, Move users have to actually do. The Aim also provides a huge advantage when it comes to weaponry. While Move users can put a gun in each hand, the hard, quick-firing assault rifles that populate the Aim version gives players a distinct advantage over those playing with the handguns and machine pistols available to Move users.

Fundamentally, the different controller options function as a kind of difficulty level. The Aim’s more powerful weapons, free movement, and easy reloads offer a less tense experience. It’s not a worse game with either controller, it’s just that the Aim version of Arizona Sunshine is about sprinting through groups of zombies, laying waste to them with World War 2 rifles and SMGs. The Move version is more focused on slowly moving through a zombie-filled world, carefully lining up headshots. Fans of zombie games who enjoy feeling the pressure of encroaching undead should choose accordingly.

Arizona Sunshine is a game that allows players to chill out and blast zombies to pieces in the comfort of their own homes, living out their dreams of slipping into a world where they can use an epic arsenal of weapons to completely eradicate a shambling threat. That may not be the highest bar to clear, but Vertigo Games accomplishes it with style. Rating: 7.5 out of 10

Disclosures: This game is developed by Vertigo Games and Jaywalkers Interactive, and published by Vertigo Games. It is currently available on Oculus, Vive, and PSVR. This copy of the game was obtained via publisher and reviewed on the PSVR. Approximately 8 hours of play were devoted to the single-player mode, and the game was completed. 1 hour of play were spent in multiplayer modes.

Parents: According to the ESRB, this game is rated M and contains Intense Violence, Blood and Gore, Drug References, and Strong Language. Non-stop gore is the meat of this experience – zombies are constantly getting blown to pieces, leaving bloody chunks everywhere. It’s ludicrously disgusting, and the cartoony art style only goes so far towards blunting the horror of it. Also, the main character swears constantly. I didn’t really notice the drug references, though… Even still, keep kids away from this one.

Deaf & Hard of Hearing Gamers: Being able to hear zombies sneaking up behind you is vitally important to the gameplay, and you’re going to take a lot of hits if you can’t. While the main game should still be able to be completed, higher difficulty levels and Horde mode will be off-limits. Dialogue and directions are subtitled. This game is not fully accessible.