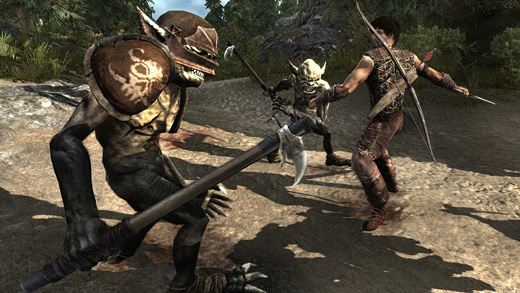 HIGH Using a wall of fire to exterminate a horde of skeletons.

LOW Watching the graphics engine try to keep up with jogging around the map.

WTF AAAAH! I thought that was a turtle!

In an ancient land of magic and mystery, a king has been cursed by a demonic force. Predictably, this doesn't go well for anyone, but especially hard-hit is the main character of Arcania, whose pregnant fiancee (along with the rest of their village) is murdered by soldiers. He's forced to flee with Sean Connery's character from Highlander before embarking on a quest for answers, followed by revenge.

As a Western role-playing game (RPG) with all of the real-time combat the genre demands, Arcania: The Complete Tale

(Gothic 4) is notable for being perhaps the most resolutely linear RPG I've ever seen. Eschewing the open-world concept embraced by most RPGs since, well, ever, Arcania places its main character in a series of large areas full of characters with errands that need running, and then essentially locks those areas and quests away once the plot has drawn the player into the next area.

This design choice seems all the more puzzling when one considers the presence of magical teleporters which can only be used for point-to-point transmission within a given area. This isn't a huge problem in the game, but it certainly flies in the face of convention in a way that does the game no favours. The RPG is a genre for completists who enjoy tying up the loose ends of every quest line and tracking down every collectible. Not allowing players the option to go back and clean up after themselves is puzzling to say the least.

Returning to the norm for RPGs, Arcania allows players to build their own character, earning levels and assigning points to skill trees that gradually transform them into a fighter, wizard, archer, or some combination of the three. The classes are fairly well-balanced, with enough variety in weapons and abilities to to make any of them a viable choice for playing through the entire story. As is often the case, there are disadvantages to playing a strictly melee character, but none of the ranged enemies are so powerful that going sword-only makes the game unplayable.

Arcania's strength comes in its fascinating and creative enemy design. While many of the creatures are generic fantasy standbys—orcs, wolves, dinosaurs and golems all make appearances—there are enough fresh designs to catch the eye of even the most jaded RPGamer. Landsharks are a sight to behold, and one monster who masquerades as a harmless sea turtle was nightmarish enough to stick with me even after the game was over.

Sadly, the (mostly) solid genre fundamentals and interesting art design are badly undercut by serious technical issues which will hamper enjoyment of the game quite a bit.

For instance, there are frequent framerate issues that cause stutter whenever more than a few monsters pop up, and it's only made far worse when mass-damage spells are used. Texture pop-in is also a huge problem. When the geography reaches a certain level of complexity, the engine essentially collapses and shows only blurry versions of textures unless the player is willing to stand in one place for a few seconds for them to load. Given that this is a port of a three-year-old game which runs just fine on mid-range PCs, it seems like there should have been plenty of time to get these issues worked out before release.

In addition to the main game, the disc contains "Fall of Setarrif," a brief expansion campaign that sends the main character on an adventure through a ruined city. Setarrif is a brief slog, interesting only for its inclusion of side-quests that let the player briefly control NPCs and the final boss fight which is the same as the main game, only now set in a far more interesting location. There are plenty of opportunities to slaughter zombies in the sunken chasms that were once Setarrif, but it's by no means essential after Arcania is complete.

With an interesting main storyline, creative enemies, and fundamentally solid gameplay, it's too bad that that Arcania: The Complete Tale

's technical flaws prevent it from being a must-play. There aren't enough decent action-RPG hybrids for console players as it is, and Arcania isn't going to do much to fix that. Rating: 5.0 out of 10.


Disclosures: This game was obtained via publisher and reviewed on the PS3. Approximately 45 hours of play was devoted to single-player modes (completed 2 times).

Parents: According to the ESRB, this game contains alcohol reference, blood, language, use of tobacco, violence. Despite some booze, some blood, and some oblique references to sex, Arcania is a pretty safe game for even younger teens to play. They'll be killing some humans as well as some genuinely creepy creatures, but none of it is so intense of excessive that you should find it troubling.

Deaf & Hard of Hearing: You will be fine—it uses no audio cues and offers subtitled dialogue. It'll be a breeze.