Take It Up With My Robot Hand 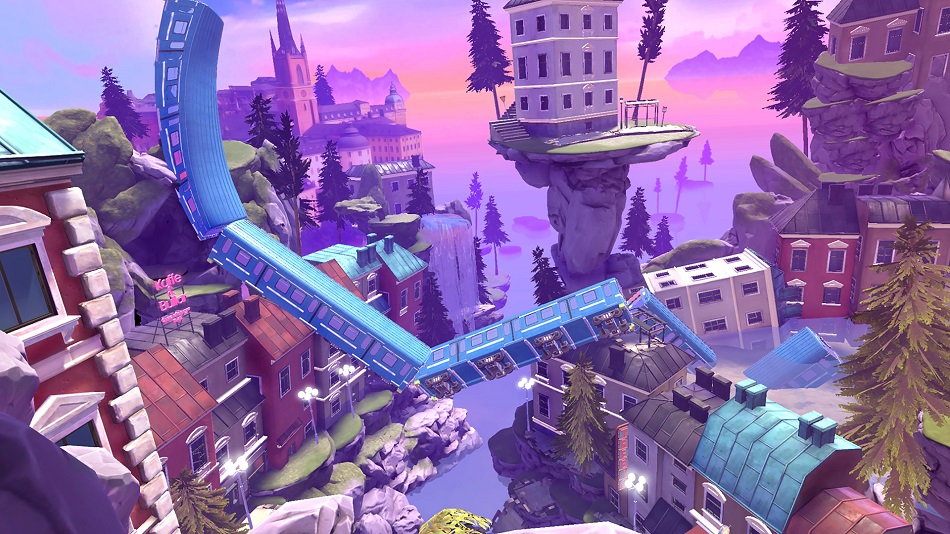 HIGH Getting my first look at the boss of the underground.

LOW Losing thousands of saved-up energy points because a crab sneaked up on me.

Post-apocalyptic landscapes are so incredibly common in videogames that it’s difficult to imagine any developer coming up with a new spin on the concept. However,the folks behind APEX Construct have managed to come up with a unique set of visuals that set their dystopia apart from the rest, and it’s all the more stunning because the player is able to wander through it at their own pace.

APEX casts players as the last person on Earth — a survivor rescued from an ethereal state by an AI which calls itself Father who’s engaged in an ongoing war with a rival AI named Mother. Being in Father’s employ (of course!) means venturing through the remnants of earth, running errands and using a bow and arrow to kill robotic animals.

The archery, robot beasts, and delving through ruined facilities call to mind Horizon: Zero Dawn, but APEX has character and style all its own. The world has been broken into segments and then awkwardly reassembled, with the pieces not quite joined back together. Everywhere the player looks, they’ll see floors separated and jutting out at odd angles, different locations oddly mixed up, and cracks in reality that reveal an abyss of code floating behind.

Exploration and movement are largely seamless. Players have access to both teleportation and full locomotion at any time, with a wide suite of comfort options to make sure they’ll be able to play without risk of queasiness. APEX is built around a central hub, from which the player can take on missions in a handful of large maps. While each mission involves finding an object or flipping a switch, players are free to engage in limited exploration as well, like figuring out passwords to unlock MS-DOS based terminals or sniffing out secret doors. 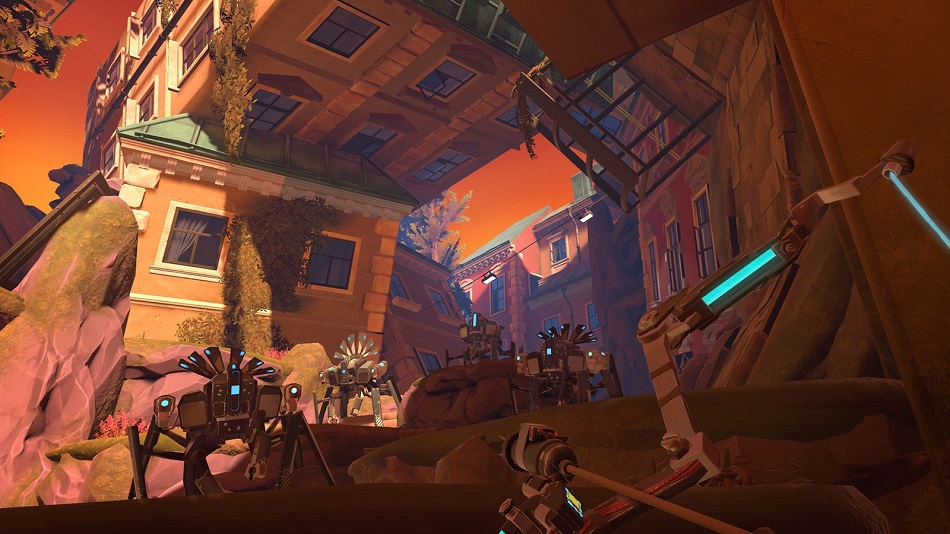 Combat works well most of the time – the tracking on the bow and arrow is dead-on, and players have the option of either transforming their bow into a shield to block incoming enemy shots, or simply leaning out of the way. Energy blasts are always aimed at the player’s face, so the natural instinct to duck should serve them well.

However, one problem that crops up is the extremely punishing penalty for in-game death. Players need the energy slain enemies leave behind to upgrade their abilities, but collected energy isn’t banked until they reach the end of the mission they’re out on. So, if a player were to expertly kill dozens of robot spiders and wolves and then get sloppy during the final large battle that ends nearly every level, they’ll lose all of the resources they’ve gathered up to that point. They don’t have to replay the whole level, but when they reload a checkpoint, it will be without any ability to improve their stats.

The combat here is challenging enough that this resource bankruptcy happened to me multiple times, and it always felt a little unfair — the devs punish players for being bad at the game by withholding the resources they need to improve their chances next time. Those who aren’t extremely confident in their bow aiming and dodging skills can expect a lot of frustration as they make their way though APEX’s incredibly dangerous world.

APEX Construct manages what few others have – it creates a fully-fledged action adventure experience in VR. The levels are expansive and detailed, the story is intriguing enough to keep people trailblazing through each new area, and the combat – while occasionally frustrating – is just the kind of thing players looking to test their virtual bow skills will gobble up. It’s as good an adventure as I’ve seen in the made-for-VR world. Rating: 7.5 out of 10

Disclosures: This game is developed and published by Fast Travel Games. It is currently available on PSVR and PC VR. This copy of the game was obtained via publisher and reviewed on the PSVR (with Move Controllers). Approximately 15 hours of play were devoted to the single-player mode, and the game was completed. There are no multiplayer modes.

Parents: According to the ESRB, this game is rated E10+ and contains Fantasy Violence. The only violence players will see is visited on robots, so it’s largely safe. That being said, there are text files in the game going into detail about the end of the world, so be prepared to have some possibly frightening conversations about the robopocalypse.

Deaf & Hard of Hearing Gamers: You’re going to have real problems. The robot animals can be extremely stealthy, and the only warning the game gives players that they’re around is a change in music and the sound of their footsteps. Without that, you won’t know they’re coming until they start shooting, and early in the game, just a couple of shots can be fatal. If you’re going to play the game, be prepared to die a lot. This is not fully accessible.