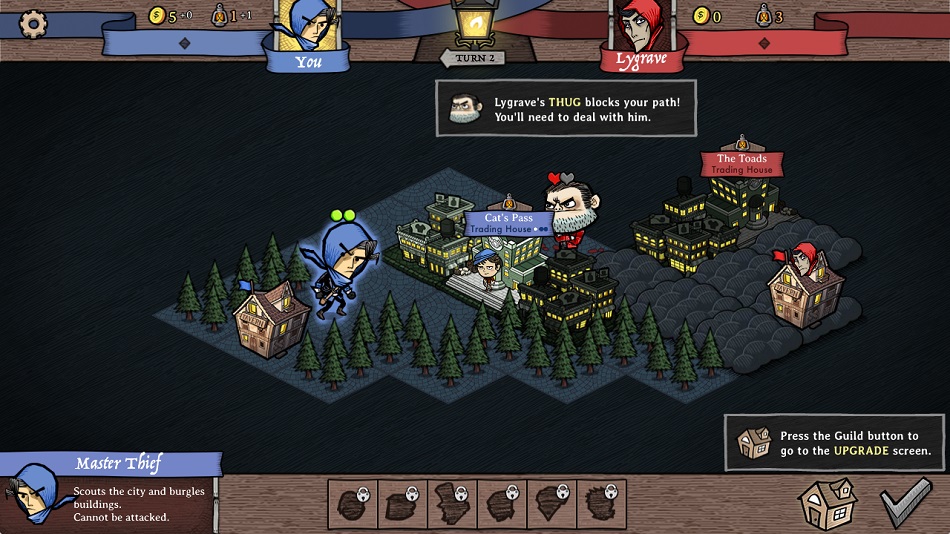 HIGH Getting three victory points in a single turn to beat a level.

LOW The isometric camera can make it difficult to click on squares diagonally above the player.

WTF So this is basically a child enslavement sim, then?

In a city which bears an in-no-way accidental similarity to Victorian London, a number of thieves’ guilds ply their trade, robbing from the rich. Thievery being a capitalistic endeavor, it’s only natural that the various guilds would come into conflict, each one vying to create a monopoly on robbing the merchant class blind. The player takes on the role of Lightfinger, the least morally objectionable of the thieves, and takes him on a ten-level quest to shut down the other guilds and become the unquestioned master of thieves.

Lightfinger’s quest is accomplished by way of a delightfully intricate boardgame for one or two players. The mechanics are a little on the complicated side and include upgrade trees, combat, area control, and a little resource management, but the game does a stellar job of laying out the complexities gradually, with its first third functioning as a kind of extended tutorial that manages to offer a satisfying challenge in its own right.

Antihero is the kind of specialized boardgame which – while it could work on a tabletop – uses the easy randomization that computers offer to great effect. Each of the game’s levels is broken up into blocks of buildings surrounded by narrow, fog-filled streets, and each block is made up of a series of buildings. All but one of the buildings can be robbed for quick cash, but the final building is a special square that has to be captured by buying and assigning street urchins to infiltrate it.

The player starts off in control of only the master thief, who can remove three squares of fog at a time or unmask an entire block of buildings. Expanding visibility is of vital importance – during the other player’s turn (be they human or AI) player one can’t counter their plans if they can’t see what they’re up to

Winning each level (or two-player game) requires building up a certain number of victory points. The interesting twist is that it generally doesn’t matter what type of point the players grab, so long as they get enough of them. There are three common ways – assassinate special targets who randomly move around the map, occupy churches to steal blackmail information on the ruling class, or save up upgrade points to bribe the city government. Also, certain single-player levels having bonus plot-based objectives that must be completed. 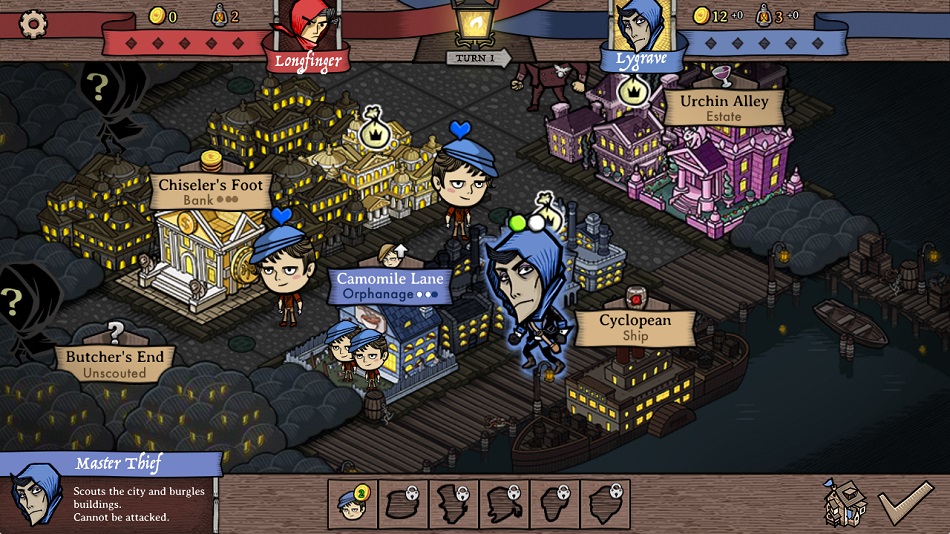 The genius of this setup is that the two players won’t immediately know which kind of victory the other one is chasing until they start racking up points, forcing them to choose a path — boldly chasing one avenue of success and risking being undercut, or hedging their bets and trying for a diversified selection of points. Since the other player’s strategy is a mystery for a while, there’s always a ton of second-guessing in any successful match.

In Antihero, the developers have created one of the most elegantly balanced systems I’ve seen in a while by offering a wide selection of units that can counter each other if used correctly. For example, players can only move their units through fog-free streets that aren’t blocked by foes. They can hire gangs of toughs to kill random thugs or enemy troops, but sending them out might leave them exposed during the enemy’s turn, giving player two a chance to swoop in and wipe out a freshly leveled-up gang.

Likewise, urchins can be dispatched to improve buildings, awarding character bonuses or even victory points – but those urchins can be evicted by gangs or carted away by truant officers, instantly wiping out both the upgrades to the building and the money the player spent training the children. There’s even a counter to that, however – if players buy a bomb and place it in a building they control, any trying to attack it will fail and be left an easy target for their opponent’s goons. There’s no move so clever in Antihero that a correctly-timed countermove can’t defeat it.

Antihero is also a visual success – all of its characters have a thick-lined and heavily-shaded look and bright colors to ensure that they don’t disappear into the oppressively grey background world. There are even cute comic book panels introducing each of the campaign’s chapters, using these adorable designs to great effect.

There isn’t much wrong with Antihero. The systems are perfectly balanced ensuring that every game is a fair one, and players can even set win conditions and troop prices at the start of each match, completely transforming how each session plays. Unfortunately, there are only four maps available at the moment, although their layouts are randomized and each one has its own special characteristics ensuring that players can constantly find new and interesting ways to challenge each other on the field of thievery.

Whether one is considering the challenging campaign mode or the endlessly replayable multiplayer, Antihero is a top-notch electronic boardgame. It rewards players who learn the systems, but contains just enough random chance to keep things interesting. As a game of stealthy moves, hidden trickery and careful manipulation, this is one of those occasions where the setting and gameplay are perfectly matched, offering a great experience for any would-be thief. Rating: 9 out of 10

Parents: This game was not reviewed by the ESRB, but contains violence, and alcohol use. As a board game, the violence isn’t particularly visceral or traumatic. It does, however, feature a lot of child labour, and using alcohol to employ goons. There’s also the option of hiring professional child-catchers. It’s pretty dark stuff, really, and not to be played by pre-teens.

Deaf & Hard of Hearing Gamers: No audio cues at all! You’re good!