There's something to be said for death animations. The physics revolution has changed the way gamers think about murdering everything from limo drivers to alien shock troops to giant robots. Nowadays when gamers shoot the last bit of health out of their opposition they expect to watch them slump to the ground or fly off into the distance, depending on the caliber of gun they were using. It wasn't so long ago, though, that teams of artists and animators painstakingly handcrafted individual death animations for every foe, so that players could marvel as heads exploded, innards spilled out onto floors, and, in one famous example from Goldeneye, a guard writhed around for close to a minute, clutching his injured groin. For whatever else Alien Shooter: Vengeance accomplishes, it serves first and foremost as an impassioned argument against the end of death animations.

The story of a generic mercenary who kills a truly startling number of monsters, Alien Shooter allows players to wander around claustrophobic underground areas, all viewed from a diagonal overhead perspective familiar to anyone who's ever played Diablo or any of its ilk. The gameplay is the simplest thing imaginable, consisting of little more than pointing a cursor over the enemies and clicking a button to open fire. This may not seem like much material to build an entire game around; however, a little more depth is added with a bit of character building, as well as the occasional vehicle to drive around in and stationary gun to man. Although the additions may be simple and a little flawed, they're more than adequate in stretching the game out to feature length. 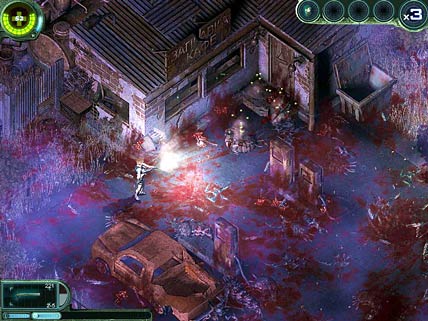 While rendering everything in majestic 2D gives the game a superficial look that screams '1998', the slightly primitive graphics actually help improve the gameplay. Since everything is represented with simple sprites as opposed to complex models, even older machines can depict the game's key feature: throngs of creatures massing onscreen all at once. While the monsters may not possess that vital third dimension, they're rendered beautifully, all thrashing limbs and dripping fangs.

That beautiful design extends into the monsters' aforementioned death animations, which are just stunningly gory. Mutants are blasted apart, frozen and knocked into chunks, set aflame and riddled with holes, and if there are a limited numbers of animations, the enemies attack so quickly and in such large numbers that for the most part players will only be catching brief glimpses of viscera flying off of the things they shoot. Add to this the fact that the game is constantly introducing new enemy types for nearly its entire length, and even towards the end I was still marveling at all the different ways my enemies were being splattered. To cap it all off, dead bodies and bloodstains don't disappear, the sprites are just layered on top of one another—so at the end of each large conflict my character would find himself striding over a huge field of blood and body parts. Which is always a good time.

Also impressive is the huge array of weaponry available to the player. From shotguns to missile launchers to rapid-fire laser cannons, there are new, more terrifying weapons constantly being unlocked over the course of the game, each one more memorably destructive than the last. It's a nice system with one drawback. The game's character has a very limited inventory, and the guns are very expensive, so unless the player is incredibly careful about collecting every bit of cash available, they'll have to make some hard choices about which weapons they want to carry. That's not even considering whether they'll be able to use them or not. 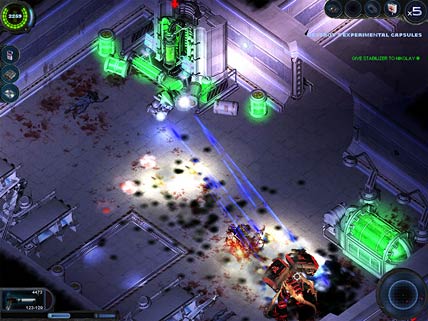 Which brings me to my only real problem with the game: the ill-conceived RPG elements. Instead of just focusing on collecting and shooting, the developers included a character-building element that nearly hamstrings the rest of the game. The player has a variety of standard statistics, such as health, strength, agility, and the like that effect how fast their character moves, how much they can carry, etc.. But in addition to these, they also have skill bars attached to each type of weapon, and if their skill level isn't high enough, they'll never be able to use the bigger, better weaponry.

This wouldn't be such a problem except for the fact that the only way to increase these skill bars is to assign points awarded whenever the character passes a level. The math just doesn't work out, though, since only five points are awarded per level, and the player will pass maybe twenty levels over the course of the game. They'll only have a hundred points to spread around over more than a dozen skills, each of which can have a full hundred points put into it. Things are helped a bit by the addition of biochips, which the player can purchase to increase their attributes and skills. The player can only wear three of them at a time, though, and like weapons, the better ones have an intelligence prerequisite for their use. Effectively, this means that the only attribute that anyone should ever bother increasing is their intelligence, which renders the entire character building part of the game entirely irrellevant.

If the game's attempts to revolutionize and add some depth to the 2D blastfest are entirely unsuccessful, then it's a testament to the game's mastery of the genre that I'm able to recommend it wholeheartedly. No, none of the non-shooting parts of the game work anywhere near as well as intended, but the shooting itself is so much fun that it more than makes up for any shortcomings. This is casual, time-killing gameplay in the classic sense, the natural descendant of Robotron and the like. It's fun and violent and asks nothing at all from its player than to spend a few minutes blowing things to pieces whenever they feel like it, rewarding them with epic levels of blood and gore when they do. It's not such a bad trade-off, really. Rating: 6 out of 10

Where did you manage to find this game? I was interested in checking out for its comparison to Diablo, but I couldn’t ever find a store that had it.