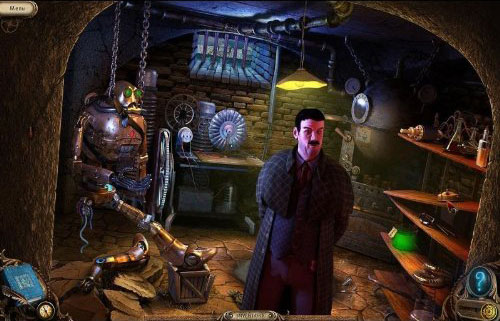 HIGH Finally figuring out what all that coal was for.

LOW A rotating block puzzle? Have we not evolved past the need for these?

WTF Where did that submarine come from?

Set in Europe at the turn of the 19th century, Lord of the Mind follows Alex Hunter's quest to locate a missing scientist and uncover the terrible secret behind his dangerous research. The search carries the player through a series of interesting locations during one of the longest nights on record.

For a casual game about clicking on barbells, records, and other random items, a surprising amount of thought has gone into worldbuilding and keeping it internally consistent. While more of a simple search and rescue story than a legitimate mystery, there's more than enough plot to keeps players hooked through what has to be one of the most fast-paced HOGs I've encountered.

Only a little. Alex Hunter's HOG screens are lushly produced, full of animated backdrops and small interactive areas that serve no purpose but to delight the player. The developers have gone a long way to explain the cluttered masses that must be sifted through—by using a variety of derelict settings (sewers, old asylums, a ransacked laboratory) the amount of random objects strewn about is largely justified. Some items are more random than others, however, and they're often tucked away in absurdly awkward locations, which shifts the balance a little further from fair than it should be.

The searches are of the 'find the clue/key and fifteen other items' variety standard in the HOG genre. There's an extremely large number of item manipulation puzzles in the game, so there's always a good reason to go looking for a length of rope or toy soldier, but the HOG searches are definitely padded by their insistence on loading a dozen random items onto the list.

Quite well. The story follows a fairly logical investigation by HOG standards. With relatively inept police sidelined at the beginning of the game, it makes perfect sense that a private detective would have to break into sinister complexes and search for clues in order to track down the missing doctor. The puzzles, while fairly ornate and complex, do a good job of fitting in with the game's setting, never feeling out of place in any of the locations.

It isn't until the very end that the game goes completely off the rails—for the first four hours, the story follows a completely coherent path, as the player learns more about the 'Lord of the Mind' technology and the threat it poses to the world. Then, just as things seem to be reaching a climax, the titular machine is turned on, and everything the player has been led to believe is tossed aside and they're transported with almost no explanation to an entirely new location, and handed a bizarre set of random tasks to complete. It's an incredibly jarring interlude that feels like it belongs in an entirely different game. It breaks the flow of the story, and makes the plot's resolution feel oddly underwhelming.

Up until that last hour of gameplay, Alex Hunter: Lord of the Mind is a stellar example of the genre. The graphics are beautifully drawn, the puzzles are fair and fun, and a quick-travel map makes the expansive world easy to navigate. If it weren't for the story going completely mad in what seems like a desperate attempt to tack on a little more gameplay, this would have been a glowing review. As it is, Lord of the Mind is a great HOG for most of its running time, but the jarringly disappointing finale keeps it from being one of the classics. Rating: 8 out of 10


Disclosures: This game was obtained via paid download and reviewed on the PC. Approximately 8 hours of play was devoted to single-player modes, and the game was completed.

Parents: The game was not reviewed by the ESRB, but it contains violence. You'll see some corpses, there's a little shooting, and the implication that horrible experiments have been done on captive mental patients. Beyond that, though, it's a pretty safe game.

Deaf & Hard of Hearing: It's a HOG with no audio cues. You'll be fine.

How do you pass the chaulkboard part on alex winter lord of the mind?