Imitation is the Sincerest Form of Flattery 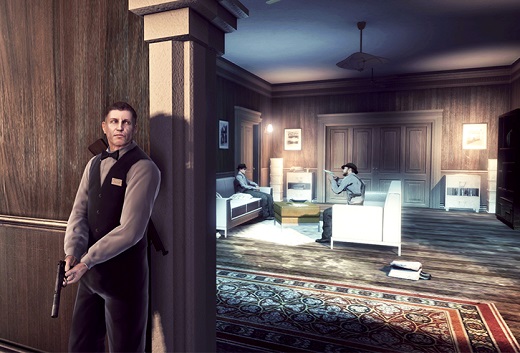 HIGH Stopping the Nazi nuclear program with a well-placed bullet. That never gets old.

LOW Having to search a five-level map for a can of peanuts.

WTF Why am I trapped inside this bush?

Years ago, I saw the move Blessed.

It starred Heather Graham as a young wife who moved into a classy gated community. She was unnerved by the creepy residents and became isolated as her husband's career suddenly took off. She then found herself unexpectedly impregnated with Satan's child.

If this sounds familiar, it's because it's the exact plot of the film Rosemary's Baby. The film was so close to its source material that I was shocked to see neither Ira Levin nor Roman Polanski credited—it's fine to be inspired by another piece of artwork, but there's a point at which inspiration becomes plagiarism.

Which brings me to Alekhine's Gun.

A third-person stealth action game, AG puts players in the shoes of Semyon, a Russian Agent who finds himself working alongside the CIA to stop a conspiracy of American military officers who intend to murder President Kennedy and then trigger a third world war. This means, right off the bat, the best he can hope for is a 50% success rate.

The gameplay is cribbed pretty closely from the Hitman series—sneak through areas, silently kill people, steal their outfits, continue sneaking. This isn't a problem in and of itself (I recently defended the practice of cribbing great design elements) but AG goes one step further than that. The developers not only steal the flow and feel of Hitman's missions, but also many of the level designs.

There are so many parallel points that I'm forced to save them for another article, lest this stop being a review and start being a list, but suffice it to say that while the story and plot may be wildly different than Hitman: Codename 47's, the missions give a distinct sense of déjà vu. Whether infiltrating a classy hotel, murdering gangsters in a Chinese restaurant, or heading to the jungles of Central America to gun down mercenaries, everything here feels three shades too similar to Io Interactive's work.

This similarity makes it doubly tragic that Alekhine's Core gameplay is so shaky. It's been sixteen years since Hitman came out, and twelve since Io Interactive took its own second shot at Codename 47's content in Hitman: Contracts. Surely that's enough time to come up with some way to improve the formula, no?

Alekhine's Gun seems like a game released outside of its own time—sure, there are high-resolution textures everywhere, but the stiff animation, barely-there physics, and boxy, generic levels make the whole thing feel like a project from the early days of the last generation. Half of the time I was convinced that the game was built on a heavily-modded version of the Hitman: Blood Money engine, but whether that theory is true or not, the developers were clearly following Io's template incredibly closely.

Semyon can shoot, stab, and garrote enemies just like Agent 47, but most of his time is spent finding the right costume for infiltrating different areas of various maps. This is actually the place where it learned the least from Hitman—a shockingly small amount of help is given to the player when it's time to plan out a mission.

Hitman's developers were always good about noting locations of interest on maps—places where players could find tools that change the way they could complete the mission, or areas where opportunities existed to cause 'accidental' deaths. At times it seems like the Alekhine's developers understand the concept by dropping an exclamation point here and there on the map, but in general they expect the player to scour every corner until they come across a random item that will prove vital.

While the game offers a disguise-free difficulty that caters to stealth/shooter fans and a 'focus mode' to help simplify the sketchy gunplay, the game's main concern is clearly clean kills. The developers grade players using the standard 'times spotted/non-vital targets killed/bodies found' metric, but it causes no end of frustration because there were many situations when I knew the game expected me to find a way to quietly complete a level, but the stages were so obtusely designed, packed with enemies, or lacking in alternate paths that I'd be forced to shoot my way out of badly-crafted situations.

I'm not new to the genre, and while I can't claim to have finished all of the Hitman games with a spotless record on the highest difficulty, I can safely say that at no point would Io's designers ever ask players to walk through three rooms full of FBI agents, knock a man out in the fourth room, and then carry him back out the way they came in. That sort of work is about as far from stealth as something can possibly be. It's the opposite of stealth.

Alekhine's Gun stole from the best, but didn't know what to do with the spoils of its crime. The story is interesting and the levels are playable thanks to the source material being just that good, but it's missing the spark and attention to detail which made Hitman such a phenomenon. The copycat locations may look better than the originals, but the gameplay simply isn't there. Rating: 4.5 out of 10


Disclosures: This game was obtained via publisher and reviewed on the PS4. Approximately 10 hours of play were devoted to single-player modes (completed 1 time). There are no multiplayer modes.

Parents: According to the ESRB, this game contains blood, violence, language. Despite the warning, this game is largely bloodless. You'll see some spattered on walls here and there, but no matter how brutally I shot or stabbed people, there was never a mark on them. You can't even put bullet holes in walls. Oddly, the ESRB missed the game's prominent alcohol use, which is odd, since numerous targets can be killed by poisoning their drinks. There is some foul language, but it's neither severe no frequent enough to be sensitive to any but the most sensitive listener.

Deaf & Hard of Hearing: You should be largely fine. There are onscreen indicators to let you know if you're being suspected, so you don't have to count on hearing yells and gunshots. The game even flashes to grayscale if you've been spotted and combat's about to start. It's all very convenient, and all dialogue is subtitled.

Remappable Controls: No, this game's controls are not remappable. Beyond that, even the most basic options aren't available. You can't invert the camera axes or change stick sensitivity. The worst thing, though, is the map button—there isn't one, despite the touchpad on the PS4 not being assigned to anything. No, if you want to get to the briefing/map/inventory screen, you have to hold down the guide and focus buttons at the same time, which has the bonus effect of turning on either the guide or focus function, whichever button you hit slightly first! I have no idea how this wasn't fixed in testing.

Colorblind Modes: There are no colorblind modes available in the options. I personally played much of the game in black and white, and had no trouble with it. The only slight problem? Differentiating between me and civilians on the map screen. Protip—they're the ones moving. Semyon is busy looking at the map screen.

i rather aim the gun at the disc