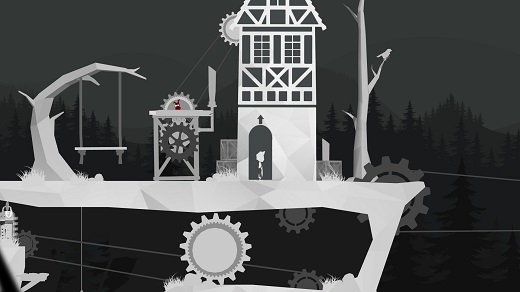 LOW Screwing up fifteen times in a row because the jumping controls are terrible.

WTF Is that the Ark of the Covenant?

With a monochromatic palette and sidescrolling platform/puzzle design, Albert and Otto very openly invites comparison to 2011's Limbo. Following in those footsteps is no small task, and while it occasionally stumbles, most of this two-hour running time is an eerie, memorable adventure.

The game is set in a dreamworld influenced by 1939 Germany, and follows Albert as he searches through a bleak landscape for a missing girl. He's aided by Otto, the girl's stuffed rabbit. Their journey takes them over cliffs, down rivers and through caves. Along the way they'll battling fiendish puzzles, ravenous piranhas and terrible shooting mechanics.

When Albert and Otto sticks to lever and physics puzzles it does a great job. Otto is an extremely versatile partner—when carried on Albert's back he allows the boy to double jump and moves objects with an ersatz gravity gun. He's equally useful when dropped on the ground to weigh down pressure plates and remotely power electrical transformers.

The puzzles are quite clever on the whole, made all the more challenging by the fact that the game never bothers to teach players new techniques before they're needed. This 'toss them in the deep end' philosophy makes for entertaining tasks right up until the end, where the difficulty spikes so hard that I thought I'd encountered some glitches in the program.

There are a couple of rafting sequences that have Albert hop on a crate and ride down a raging river, jumping over obstacles and solving puzzles in quick succession while trying to keep up with the makeshift raft. It wouldn't be a problem if the jumping and aiming controls weren't so awkward. Aiming in one direction leaves Albert unable to move quickly in the other, so the player is in the impossible position of making incredibly finicky jumps with barely functional controls. It's not enough to ruin the experience, but the endgame leaves a bad taste in the mouth after the otherwise tasty bits that come before.

Also strange is the decision to completely toss out the hard-won somber tone for a few sequences of comedic animal cruelty. For most of the adventure, backstory is given in the form of a child's drawings and a shattered photo, coloring the world with dark brushstrokes of lost innocence and impending doom…

…And then, the player picks up a cartoon sheep and sets it on fire as a torch. They'll also throw another hapless sheep onto some spikes to use as a platform. The animals go to their doom bleating in wide-eyed agony, and it's possible that the developer is trying to make some kind of a point with these sequences—there's an evil wolf in the game to provide counterpoint, after all—but the tone clashes so severely that it genuinely damages the atmosphere.

Albert and Otto certainly has a few issues, but it's still well-made and endearing. In fact, it's good enough to get me excited at the prospect of another installment which is sure to come—I just hope they tighten up the controls and straighten out its tone before it arrives. Rating: 7.5 out of 10


Disclosures: This game was obtained via publisher and reviewed on the PC. Approximately 2 hours of play were devoted to single-player modes, and the game was completed. There are no multiplayer modes.

Parents: According to the ESRB, this game contains fantasy violence. For the most part your children will be safe. There's some shooting, and a few scary monsters, but the only thing that should really give you pause is the animal cruelty. It's treated in a very cartoonish fashion, but is victimizing an innocent sheep something you want your children play-acting?

Deaf & Hard of Hearing: There's a telltale screech that happens whenever you're going to be attacked by a crow from offscreen, and without it you're going to have to learn where they are through trial and error. Other than that you'll be fine.