While writing my review of Kane & Lynch: Crazy Caper Crooks, I noticed something strange about the box art. Here's the actual cover, followed by a screenshot from the game. 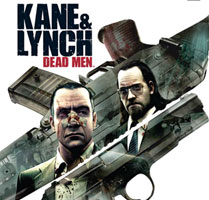 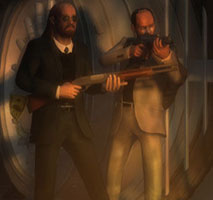 Kane they've pretty much presented as-is, other than his hair being a little thinner, and brown, not black. No, the real issue is with the depiction of Lynch. Not only has his hair undergone the brown/black switch, but suddenly he's got a lot more hair, bordering on a widow's peak. In case it's not clear enough in the picture on the right, here are a here are a few more shots of Lynch in his natural habitat. 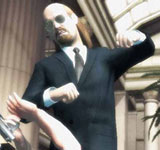 It's plainly visible here in close-up, with his hairline highlighted. 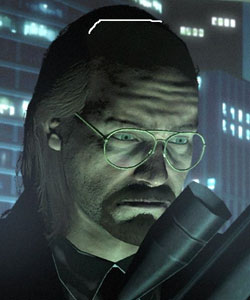 I totally understand the need to put the best foot forward when designing promotional art, after all, studies show that up to seventy-five percent of videogame buyers do, in fact, judge games by their covers. But this case is a little baffling. It's already a game about two middle-aged men who murder strangers for next to no reason. Is it really plausible that an executive somewhere thought that a person who was planning on buying a game about characters who looked like this: 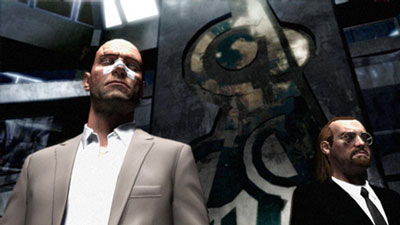 Would balk at the idea of buying a game starring characters that looked like this: 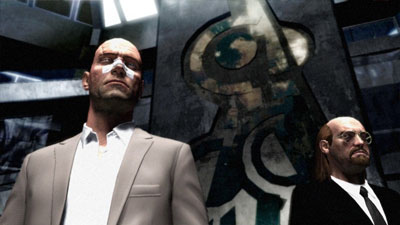 I wonder if different versions of the cover art were tested? Is there a projection of lost sales weighed by follicles divided by square inches of forehead? That's a chart I would love to see.

Oh, and I apologize for the crude, crude photo retouching. I promise I'll avoid editing pictures in the future.

“studies show that up to seventy-five percent of videogame buyers do, in fact, judge games by their covers” – I hope this is part of the joke… :/