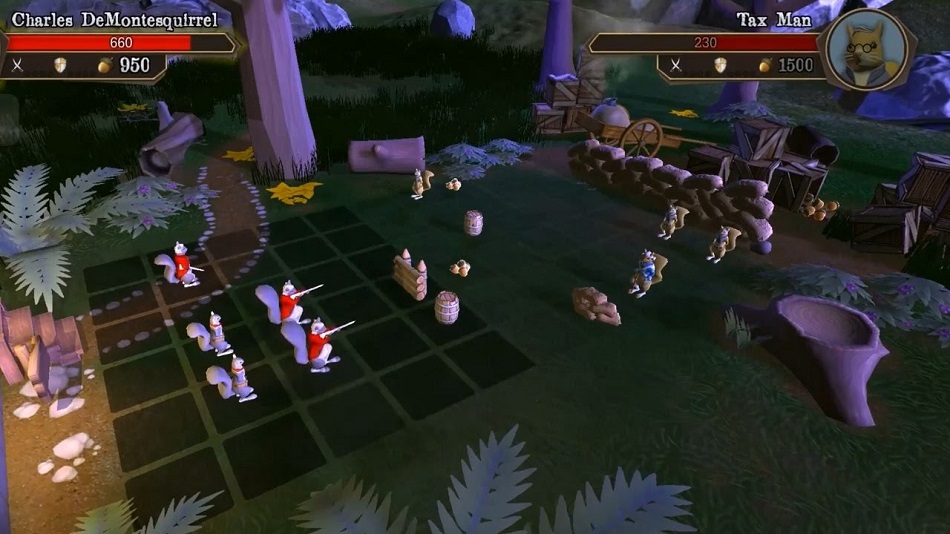 LOW Fighting a bad guy who gets to rebuild all of his defenses every turn.

“What if the French Revolution had been fought by squirrels over unfair acorn taxation?” is a question that had been asked by no one, ever. Now, somehow, a game has arrived to answer it.

Acorn Assault is a virtual boardgame that puts players in control of a squirrel uprising hell-bent on deposing their greedy king. This can be accomplished by defeating five different opponents five times each via a card-based system of troop deployment.

Each faction has a barrier that must be destroyed, and a field of squares in front of it. At the beginning of each turn the player is issued five cards – three troops and two defenses, or vice-versa. The player sets their troops and pieces of cover out, then, as the turn ends, all of their squirrel soldiers fire period-appropriate weapons straight ahead, striking the troops, defenses, or barricade segments directly in front of them.

While it’s an incredibly simple game at its core, strategy comes from two complicating factors.

If players put three or more identical units next to each other, they’ll combine, transforming into a single unit with all the health and damage potential of their component parts. Making these matches earns the player acorns, which they can then use to buy single-turn buffs before their troops attack, giving them a bonus to attack or defense, or repairing their barricade. 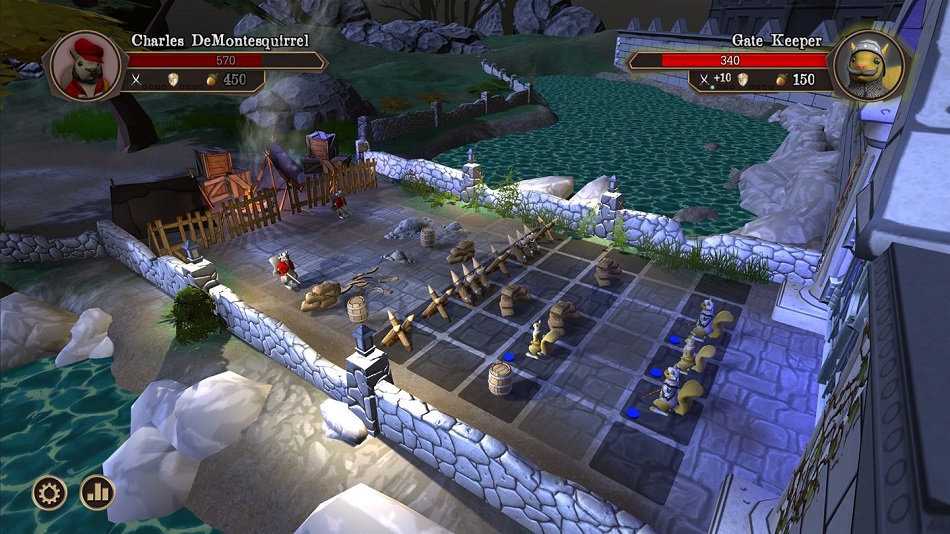 Where and when to combine troops is the key strategy at the core of Acorn Assault – especially since the new troop is always placed in the space where the final card was played, forcing players to be extremely careful, lest they wind up looking down the barrels of a whole column of enemy rifles.

Acorn Assault’s biggest problems are a lack of depth and sub-standard AI.

While the core game rules function well, once players have spent an hour with it, they’ll have seen basically all it has to offer. Combinations aside, there are just two types of units – attack and block – and nothing complicates or changes the actions they perform. Each of the five enemy commanders has a different special move that keeps the game from getting too stale, but early on I discovered a simple strategy which worked extremely well against the AI, allowing me to breeze through the campaign without much trouble.

Perhaps owing to its board game-style construction, Acorn Assault works fairly well as a two-player game. Players can select whichever of the characters they like and pit them against one another in matches using the same rules as the campaign. It still isn’t anything really special, but human players are far less predictable than AI, and provide a more satisfying challenge. One drawback is that even though the player still has access to each character’s special abilities, the computer decides how they should be used at the start of each turn for reasons I can’t fathom.

It’s cute, and it’s strange, and it’s certainly got a solid ruleset, but there’s just not enough to Acorn Assault. The main campaign is twenty-five levels of repetitive combat, and the multiplayer mode is strangely handicapped, leaving it an oddity without much to recommend it. Unless, of course, one was curious about the events which inevitably led to the rise of Squirrel Napoleon… Rating: 4 out of 10

Disclosures: This game is developed by High Tale Studios and published by Black Shell Media. It is currently available on PC and XBO. This copy of the game was obtained via paid download and reviewed on PC.  Approximately 4 hours of play were devoted to the single-player mode, and the game was completed. 1 hour of play was spent in multiplayer modes.

Parents: According to the ESRB, this game is rated E10+ and contains tobacco references, fantasy violence. It’s a board game in which revolutionary squirrels shoot at French squirrel soldiers. They’re all cute, and the violence lacks any realism. Honestly, the death animations look more playful than frightening.

Deaf & Hard of Hearing Gamers: There are no audio cues and all story and instructions are displayed through onscreen text.