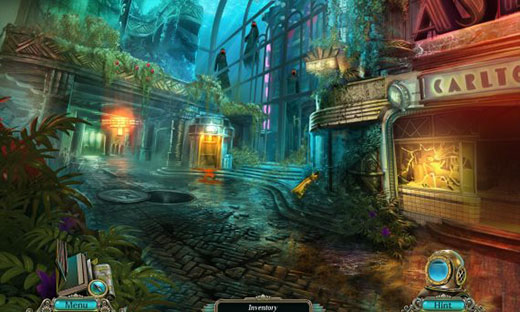 WTF Love HOGs but hate finding Hidden Objects? This is the game for you!

There's no way to get around it—Abyss: Wraiths of Eden

is a shameless rip-off which manages to avoid lawsuits by being in an entirely different genre than the game it's stealing from.

Set underwater, the player takes the role of a deep-sea diver who must brave the depths to rescue her disappeared paramour. After just a few minutes, she finds herself escaping the crushing sea pressure by making her way into… wait for it… a giant art deco-inspired underwater city that began as a utopian experiment for people fleeing the corrupt overworld, but has since been transformed into a crumbling haven for terrifying monsters.

Yes, Abyss is the HOG version of Bioshock.

So, how does this outright larceny of a premise work as an actual game? Amazingly, actually. The city of 'Eden' is a well-realized location, managing to feel like a practical place with ten years of detritus layered over it.  Stores are ransacked, walls are leaking, mold is everywhere. These wonderfully-detailed scenes are not only consistently well-drawn, but all manage to reinforce the menace of the setting. Players spend the game wandering through this sunken graveyard, and although there are very few putrefying corpses that suddenly fall into frame, the threat of that happening looms ominously over the whole experience.

Not at all. This is really a case of a developer making the most of their location. The game's 'Eden' has been left to rot, and as it fell into ruin, items were left strewn randomly around locations, leading to authentically cluttered HOG screens. In another nice touch, the game doesn't cheat with items by vastly altering their size/shape/colour to make them more difficult to find.

The game falters a little here. As is the standard, Abyss asks players to find one plot-related item in the mess, as well as a handful that need to be uncovered for no particular reason. There are a few screens that don't suffer from that drawback, however, instead asking players to assemble an item by finding its component pieces and nothing else! It's a nice innovation that serves to mix things up well to keep the screens from becoming repetitive.

Also, in the biggest twist I've seen in the genre, Abyss offers players the chance to skip the HOG screens entirely by choosing to play a modified game of dominoes whenever they want to clear a screen. I didn't lean on this option too heavily—the HOG scenes are well designed enough to be worth sampling—but just knowing it was there felt like a breath of fresh air.

The puzzles and HOG screens are all artfully employed to build a solid narrative. While some of the puzzles are a little on the arbitrary "here is a disc with colored blocks, spin them to make them match" side of things, for the most part the player is only ever asked to perform logical actions to get sensible results. Mixing salves, casting candles, rewiring circuit boards—all of these feel like completely logical activities within the setting, and do a great job of creating a solid adventure game experience inside the HOG framework.

While Eden's halls may not challenge players with the complex moral questions they found in the depths of Rapture, it does prove that the 'sunken art deco utopia' location has legs beyond its original implementation. The best compliment I can give Abyss is that after the first few minutes inside Eden I stopped thinking about how baldly the game was ripping off Bioshock. Once the shock wore off I was treated to a solid little thriller in a compelling setting with well-designed puzzles and beautifully-drawn HOG screens.

I'm not going to offer any theories as to whether this whole thing should be legally actionable, but setting potential plagiarism aside, Abyss

is a high-quality hidden object game more than enough content to keep anyone entertained. Rating: 8 out of 10


Disclosures: This game was obtained via paid download and reviewed on the PC. Approximately 6 hours of play was devoted to single-player modes, and the game was completed.

Parents: According to the ESRB, this game contains blood, mild violence. You should be a little concerned about letting your younger teens play this one. There are some dead bodies floating around, some on-screen violence… and the storyline goes to some very dark places. Nothing that's inappropriate for the Teen rating, but still a little iffy.

Deaf & Hard of Hearing: You should be just fine—after all, it's a hidden object game, and therefore entirely sight-dependent.

Thank you for reviewing a game like this. I’m very interested and will certainly pick this game up when it’s on sale.