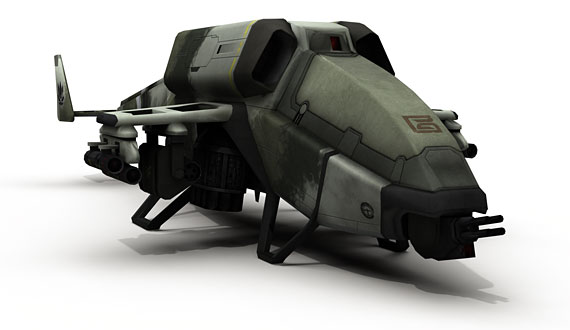 A multiplayer-only first person shooter (FPS), Battlefield 2142 is set in the titular year, when a new ice age has arrived, and the Eurpoeans are battling the Asians for the relatively small amount of land left available for the Earth’s humans to safely inhabit. They do this with assault rifles, tanks, and bipedal mechanized assault vehicles (think Mechwarrior’s Battlemechs, but far less powerful and more awkward to pilot). Beyond that, there’s nothing to synopsize or explain. The game has no content beyond its concept—up to 64 players gather on a server and shoot at each other until they decide to stop. There’s no beginning, no ending, just endless conflict. One of those ‘long wars’ that are so popular these days.

Whether the game is good or bad is almost beside the point. It’s like asking if basketball is a good or a bad game. It’s not either one. It’s just something that people do when they want a little fun competition. 2142 is based on the exact same concept. It’s little more than a way for people to kill a little time killing strangers on the internet. There’s nothing wrong with that, and the game delivers what it promises—but it’s more than a little strange just how aggressively the game is marketed solely to its base—to the point that it seems actively hostile anyone picking it up for the first time.

2142 features no training mode of any kind. If this was a player’s first FPS ever, they would find themselves bewildered in a bizarre, brutal landscape. Obviously this isn’t a game that attracts first-timers, but it’s equally hostile to anyone who hasn’t played previous Battlefield games. I’ve played every important FPS ever made, and a large number of the obscure ones as well, and I was in way over my head with this game. This problem is mostly caused by the vehicles that are featured so prominently. To say that they’re alienatingly hard to use would be quite an understatement. The various airships are basically impossible to use without training, and the game offers none. The only way to learn was by trial and error, crashing over and over again until I kind of got the hang of it. Of course, doing this massively annoyed my teammates, who probably would have preferred that the aircraft be used to actually help them beat the levels.

My biggest surprise, though, was just how fundamentally buggy online gaming is. Speaking as someone who has almost exclusively played singleplayer FPSs, I was shocked to discover that aiming a gun at someone and pulling the trigger offered no guarantee that they would be hit, let alone die. It was disconcerting at first, but beyond the occasional scrawled complaint about a ‘laggy server’, none of the players seemed to mind it, so I just went with the flow. Really, the lag-based glitching went my way as often as it did my opponents, which is almost as good as playing a game based entirely on skill, I suppose. Perhaps I would have had a better experience with the game had I played it in some manner of LAN configuration, but sadly I just don’t know 31 other people with high-end computers who would be interested in buying copies of the game and then renting out some kind of warehouse space to link them all in order to help me write a review.

I’m not trying to say that the game is worthless or pointless—I had ten or so fun hours as I learned how to play and started picking up the game’s tactics, but the repetitiveness just became too much. This isn’t a game to be enjoyed for a little while, it’s a game to be played indefinitely—something I just can’t wrap my head around. Of course, this game wasn’t made with me in mind. It really wasn’t made with anyone in mind except for longtime players of the series—who will doubtlessly buy it, enjoy themselves, and continue playing it until DICE decides what era the next game will take place in. Which is what makes this game completely review-proof. Rating: 7.5 out of 10.