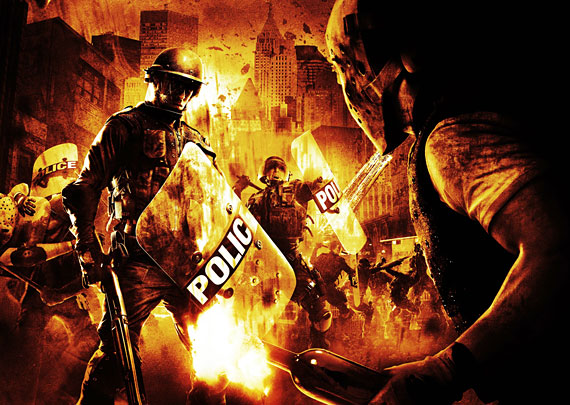 There are few more frightening and iconic figures than the riot control police officer. Dressed entirely in black with faces obscured, carrying clubs and grenade launchers, viciously beating people as they lie helpless on the ground. Their worldwide uniformity makes it seem as if there's a single organization out there passionately dedicated to clubbing the world's protestors. This makes Urban Chaos: Riot Response an unbelievably hard sell, as it portrays those very stormtroopers as the game's heroes entirely non-ironically.

The fact that Urban Chaos is a console first person shooter (FPS) puts a second strike against it. Right after that, though, the game knocks it out of the park by going to extreme lengths to justify the stormtroopers' behavior. The game's villains represent America's ultimate nightmare: What if Federal Express was actually a secret terrorist organization with no clear goals staffed entirely by white people? Cinema aficionados will recognize this as the plot of the film Arlington Road. Of course, that still isn't as terrifying as men in black armor wielding assault rifles, so the villains are dialed up another notch by leveraging perhaps the single most threatening icon of the last quarter century. Speaking as both a board-certified Jasonologist and a world-renowned Jasonosopher, I can safely say there's no faster way to sell "evil" to an audience than by sticking a goalie's mask on somebody. 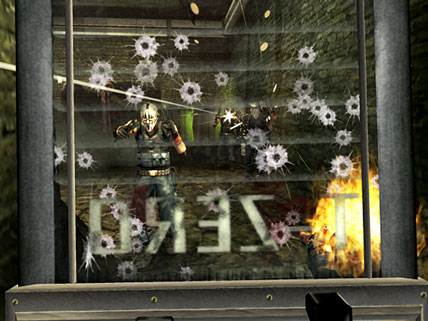 Each level of the game brings the hero, one-man army Nick Mason, into direct conflict with dozens of these cleaver-wielding psychopaths as they randomly kill people and try their level best to burn the entire city down. What separates Urban Chaos from the many, many, many other games with exact same premise is just how well this everything plays. Eschewing the modern design philosophy of open-concept levels and dynamically reactive enemies, Urban Chaos offers constrained, claustrophobic levels and entirely scripted encounters with enemies. Normally this would descend quickly into repetitive tedium (Doom 3, for example), but here every bit of the game has been so finely tuned that instead of feeling like a series of arbitrary firefights, each level feels like an intense, extended action sequence.

Where other games might just put a the player in a location with a gun and assume that all the shooting will be sufficient to make it interesting, Urban Chaos fills the game with genuinely interesting situations in which people happen to get shot. Firing between two moving subway trains, breaking open backdraft doors inside a burning building, resolving hostage situations with a well-timed headshot—the game is filled with well-executed setpieces of choreographed violence, and it's a refreshing change of pace in a genre that all too often feels like the same game over and over again, only with rounder foes and prettier explosions.

In addition to general excellence in design, the game actually makes a significant advancement in gameplay that removes most of the frustration from console FPSing—a shield. In keeping with the stormtrooper theme, the main character carries around an impenetrable riot shield. Whenever they like, players can lift their shield and become completely impervious to attack from the front. This one innovation completely eliminates the need for quicksaving and loading in an FPS. Cheap ambushes no longer result in instant death and a forced restart—the player can now safely peek around corners and get a sense of the situation before rushing in. It's more realistic, seeing bullets ping off the shield leaving marks is more thrilling, and using it during a firefight adds an extra level of skill to the game. 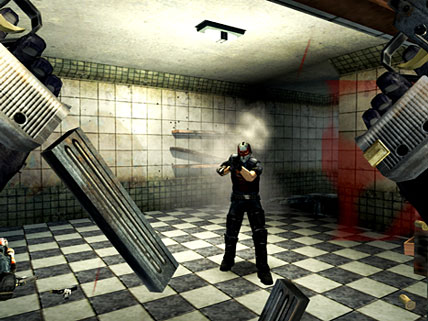 My only real problem with Urban Chaos is just how mercenarily it exploits the current paranoia about domestic terrorism as well as the simplistic jingoism and faith in an infallible government. The villains start out with knives and Molotov cocktails and build as threats until they've smuggled a Weapon of Mass Destruction into the city. There's even a discussion in the story of whether the cops have been torturing detainees, but it's resolved by the revelation that the crusading victim's rights activist is actually lying in an attempt to remove public support from the government so that the terrorists can succeed.

It's really a testament to the game's quality that even though I found its politics and implications deeply troubling I was still won over by the amazing gameplay. Urban Chaos elevates the console FPS simply by virtue of never having a dull moment. While other developers chased graphics, trying to wring the last few polygons out of the PS2 and Xbox, the developers at Rocksteady focused entirely on the moment-to-moment experience of playing the game, and it excels because of it. Given that there's only a few weeks left, I wouldn't be surprised to find Urban Chaos on my list of best games of the year. Rating: 9 out of 10.