Did You Know Bullseye Seats Two? 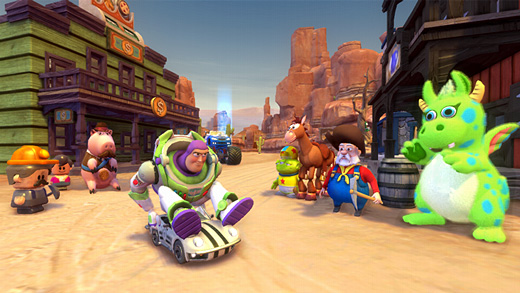 LOW Completing the game so soon.

WTF Kicking a villager through a U-shaped cactus to score a field goal.

I've only spent 30 minutes playing Toy Story 3 the video game by myself. The other 20 hours were spent with my three-year-old daughter next to me, both sitting cross-legged on the floor in front of one of the best family games for quite some time. It's rather safe to say that this game is not your ordinary, run of the mill movie tie in. What Avalanche has created is not only a faithful, playable version of the movie, but an open world game that puts plenty of others to shame.

The campaign follows the plot of the movie very loosely. Unfortunately for the adult gamer, everything is a little simple. It's very much a standard platforming affair—jump here, go there, collect that—and aside from the vibrant and cutesy characters, there is little to differentiate the game from any other low-rate platformer, but when playing it with a child, it becomes a very different beast.

Younger children will struggle with many of the moves that the characters must perform, particularly on the later, more action packed levels. I find it hard to think that a child could control a speeding Bullseye dodging falling boulders with split second timing, or that one could defend against swarms of robots rapid-firing characters into oblivion.

However, allow the child to sit beside and let them point out the objectives, and watch a wonderful team appear. There are plenty of objects to collect and things to do, and when a child spots them and points them out excitedly, it's really something special.

Certain levels heighten this teamwork. A memorable moment was a stealth-based level in which the toys must escape Sunnyside Daycare. The level itself is well-designed and makes excellent use of light and dark areas. It challenges the player without ever punishing them unless they make a foolish mistake, but the beauty of these levels is that they're very open, allowing the player to solve problems and explore pathways in their own time—perfect for suggestions from a child watching in suspense.

The main story is over rather quickly, easily be finished in around five hours. However, that's never a problem because Toy Box mode is waiting. This mode allows the players to enter a Wild West area of the game called "Woody's Roundup," easily the game's selling point. It would be easy for me to sit here and call it something lazy such as "Grand Theft Toy Story" or something similar, but it is so much more than that.

Choosing one of three characters (Woody, Buzz or Jessie) players are tasked with completing missions for the local residents. Ham, the piggy bank, is mayor of the town and starts off by introducing the villagers. Once kids have met Slinky, Stinky Pete and others, it's time to get down to business—and business can refer to anything from modifying houses and stores, to dressing up the villagers, or even stopping highway robberies.

Everything is wonderfully simplistic, and it's all the better for it. Asking a child whether they want to decorate a building like Nemo is like asking if they want a cookie. Of course they want to do it, and even as a 28 year old man I had a great time dressing people up as various characters from Pixar movies. There are also races in cars or on Bullseye, a stunt park for Hot Wheels cars, slime that shrinks and grows things that you throw it at, a camera to take pictures for billboards in the game, and so much more.

Even though I controlled the characters, my daughter always felt a part of the game, shouting for me to help Slinky round up the cows or to race Bullseye through the horseshoe checkpoints. She was enjoying it just as much as me. Even the wife came over at one point, picking up the second controller and dropping in for some co-op. We both agreed that what the game achieves for kids is the ability to transport them into the world of Woody and the gang. For adults, it's a venture back to their own childhood.

Of course, it's all a bit simple for the dexterity of grown-up thumbs, but who really cares when children sit by your side and smile as they watch animated heroes controlled by their real heroes—their parents? Rating: 8.0 out of 10.

Disclosures: This game was purchased from a retail store and reviewed on the PS3. Approximately 20 hours of play were dedicated to the single player mode and the game was completed. Only offline co-op mode is available, and approximately 3 hours were spent in this mode.

Parents: Although this game is ideal for children, it does contain very mild cartoon violence and comic mischief. It is in no way offensive and represents what would be seen in any Pixar movie.

Deaf & Hard of Hearing: You won't have any problems. There are subtitles in abundance and all moments of gameplay are usually accompanied by visual cues.

Awww, this review came dangerously close to making me want to have kids. =)

I really enjoyed your perspective in this review. Where other review sites may have just stated that the game play is simple, but your kid might enjoy it, you presented a point of view that suggested a way of playing the game with your child. It reminded me of playing games with my nephew when he was younger.