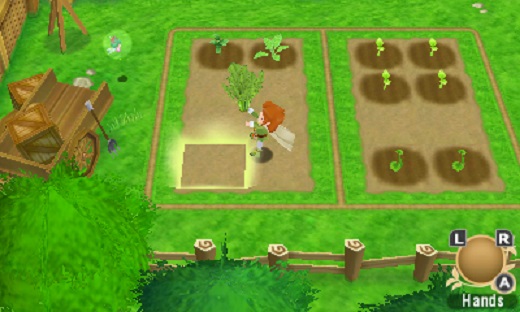 HIGH Farming and crafting for days

WTF How do these teenagers and children keep saving the world?

Return to Popolocrois is a blend of two games—standard anime style JRPG and a farming simulator in the same vein as Harvest Moon.

The former follows a linear story about deception, orphans and missing princes. The latter allows for seed planting, bug collecting and item creation. Unfortunately, with both concepts squeezed into the same game, they each feel a little lackluster in their implementation. I’m guessing that fans of the series will find a lot to enjoy since this new sequel revisits past characters, but as someone whose first Popolocrois experience was this one, I couldn’t help but feel that I was missing something.

As the game opens, we meet Pietro, a rather precocious prince who has already saved the world before hitting his teenage years. Pietro turns thirteen here, and everyone from around the kingdom has come to the castle to celebrate his birthday. In true JRPG style Pietro is soon kidnapped, brought to a different dimension, and of course, needs to save everyone.

The usual JRPG tropes are here: memory loss, orphans, and bonkers dialogue which is so cliché that it’s actually rather endearing, but this isn’t enough to carry the game, especially since the story is linear and repetitive—in order for Pietro to save the world, he must cleanse the earth beneath his feet. He does this by gathering characters from past games and shrinking to jump into gardens so he can kill evil beasties within them. Do this X number of times to light a lantern which opens a dungeon which contains a boss, kill it, and then repeat until the end. If it sounds overly simple, that’s because it is.

There are side quests, but they never go much further than ‘bring X amount of these’ or ‘kill this monster a certain number of times’. It’s all by the book, which isn’t necessarily a bad thing, but grinding through dungeons with the sole purpose of doing it again in a different area of the map lost its appeal quickly.

It wouldn’t be so bad if the combat was enjoyable, but it’s all a bit vanilla. Fighting takes place on a grid, and the player takes turns to move and fight. There are standard attacks and magical spells, and also the ability to team characters up in order to pull off more devastating moves.

It’s passable for a time, but playing on the easier difficulty (because I was unfamiliar with the franchise) takes out any need for tactics. The difficulty can be ramped up, but when I tested it, all I found was that the enemies hit harder. Popolocrois offers to play itself via auto battling, but frankly, such a feature seems pointless to me. The encounter rate can also be tweaked and set on low, often or frequent, but it’s all a bit sporadic.

While the JRPG side was a bit flat, the farming side is a joy. Mostly.

Pietro starts on an abandoned farm. He’s given a hoe, a watering can and some seeds, which means it’s time to plant crops. This aspect of Popolocrois is enjoyable because of how flexible it is. As time goes on, Pietro takes on more farms which can grow exclusive plants, he’ll expand his home farm to allow for mass production, and he’ll meet people who move into his farm and set up shop.

Apart from standard crop-growing, there’s a chap who’s obsessed with bugs; he hands Pietro a net and gives him a bingo card for catching them. The more Pietro catches, the more the bingo card is stamped in exchange for rewards. There’s also a man who teaches mining, and a smith who can make weapons, armour and trinkets. There are many possibilities, and between crafting in the shop and the buying and selling of produce from the farms, Popolocrois shows its best side.

The colorful graphics and simple character designs are easy on the eyes, and enemies have a Wonderland-style design, often combing several ‘normal’ animals to create a beast. The visuals feel thoughtful and considered. I wish I could say the same for the sound design. The English voice acting is awful and irritating. However, the developers do give the option of using one of two Japanese audio tracks.

The two halves of Return to Popolocrois aren’t equal. By the twenty-hour mark, I was enraptured with being a bigwig farmer, but the JRPG side had lost its appeal. I was essentially grinding out the dungeons not to advance the narrative, but to find items that could be utilised or exploited on the farm. I have to wonder what the experience would have been like had the developer done away with the JRPG side altogether. Rating: 6 out of 10

Disclosures: The game was the retail version, supplied by the publisher and reviewed on the 3DS. The game was completed and played for around 35 hours.

Parents: This game is family friendly. Other than some very minor innuendo, there is nothing to shock or scare here. It’s rated E+ for Everyone by the ESRB.

Deaf & Hard of Hearing: The game is fully subtitled and no audio cues are needed while exploring or fighting.

Remappable Controls: The game can be controlled via the D-Pad or the analog. The shoulder buttons are rarely used, and unless I missed something, the touch screen isn’t used at all. The controls can’t be remapped.

Colorblind Modes: There are no colorblind options included.