And don't stop dodge-rolling once you enter. 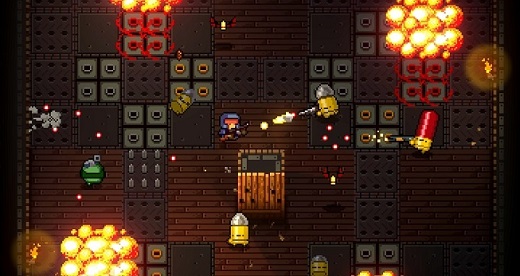 HIGH Clearing an entire floor without taking a hit is incredibly satisfying.

LOW The randomness can make some playthroughs impossible to complete.

25 hours in, and I've only scratched the surface of Enter the Gungeon. I have made progress, though—I've unlocked around 60% of the guns, items and additional features, and the starting area is almost filled out with playable characters and NPCs. However, I've not even seen the final floor of the 'gungeon' yet and I certainly haven't rolled credits.

I'm outlining these things because they illustrate two key aspects of Gungeon: first, that it's difficult, and second, that it can be very, very random.

In the same vein as Binding of Isaac and Nuclear Throne, Enter the Gungeon is a randomly-generated, top-down shooter that asks players to clear floors of enemies before taking on a boss and then moving down to the next area. The concept isn't exactly fresh, but Gungeon brings a lot to the table to differentiate itself from the crowd.

Why are we gungeon-ing? Apparently there's a weapon that exists on the bottom floor capable of erasing the past. Players take control of one of four starting characters in a bid to find this gun. Each character has different abilities or starting equipment, and this variety is part of the challenge. The Hunter starts with a crossbow and a helpful dog, the Convict has a shotgun and molotovs, the Pilot has a lockpick and can haggle with shops, and the Marine starts with armour, one ammo drop and the ability to reload faster.

This should lead directly into discussing the guns, but first, it's worth mentioning that the tutorial teaches not only how to shoot, but most importantly, how to dodge.

The dodge-roll is perhaps the most vital weapon in the player's arsenal. It not only gets the player out of the way of bullets quickly, but it allows rolling through bullets when timed correctly. It's imperative that the dodge-roll is used and mastered—as the game goes on, some enemies and bosses take a very bullet-hell approach which means relying on the standard movement is an easy way to get killed.

Now, let's look at the guns, and there's a lot of them. Some are modeled on real life, like the Derringer, M16, Uzi, and Revolver. Others are wackier in their approach—the Glacier gun shoots ice cubes, Void weapons fire energy blasts, Super Soakers shoot streams of water to push enemies back. There's even a T-Shirt Cannon, a gun that fires pillows, and some guns become melee weapons while reloading. Further, many guns are based on pop culture. The proton pack from Ghostbusters, Megaman's arm cannon, and the Nintendo Zapper from Duck Hunt all make appearances.

Gungeon doesn't just offer variety in its firearms, but depth. The Mailbox gun fires envelopes at enemies, but the last shot will always be a package which carries more force and damage. Other weapons have similar quirks, and it's in this minutiae that the game steps out of the crowd. Once enemy patterns are learned and the guns become familiar, knowing when to reload or when to hold onto that last powerful shot are key tactics, and they're vital because Gungeon isn't easy.

The enemies will use flanking patterns, unleash poison or even set everything on fire in a bid to halt the player's progress, and that's before the bosses show up. The final area of each floor contains one of several hulking monsters that spew waves of bullets, fire a myriad of guns at the same time, use freeze shots, gang up on the player, and more. Thankfully, if ever seriously overwhelmed at any point, a special item called a ‘Blank' can be activated to remove all bullets currently in the air, but these blanks are limited. Save ‘em for emergencies!

Being a roguelike, the experience is built on several randomly-generated factors. The first of these is the map itself, which will always be different—rooms change shape and size, and item placements and enemies within will be a surprise each time. The only constant are the shops. One will always appear per floor, but the contents for sale always vary.

Yes, there are times when Lady Luck doesn't smile and a run ends up being slightly dull with minimal guns and the least impressive bosses, but I loved the way Gungeon constantly changed, and it feels fresh each time it starts. I usually had an insane grin plastered across my face as I shot skulls at walking bullets, blobs of goo or massive Iron Maidens.

Enter the Gungeon is a wonderful mix of intricate difficulty and vast silliness (dodge)rolled into one— Any player partial to roguelikes or bullet-hell games will find a lot to do, and completists will be running around the gungeon for months to come.  Rating: 8 out of 10

Disclosures: This game was obtained via the publisher and reviewed on PC. 25 hours was spent playing the game, and the game was not completed. No time was spent in co-op.

Parents: According to the ESRB, this game contains: fantasy violence, mild language and use of tobacco. The game isn't necessarily mature, it contains no swearing and very little blood. However, as it states in the name, it is very much about guns and shooting enemies in both realistic and ridiculous scenarios.

Deaf & Hard of Hearing: There are subtitles throughout and visual cues to show enemies off screen.

Remappable Controls: It very simply uses the analogue sticks to move and shoulder buttons to roll and shoot, and these can be remapped. The vibration is used frequently but can be switched off. When playing on PC, all button prompts can be changed to represent the control method being used, e.g using an Xbox pad will show Xbox buttons on screen.