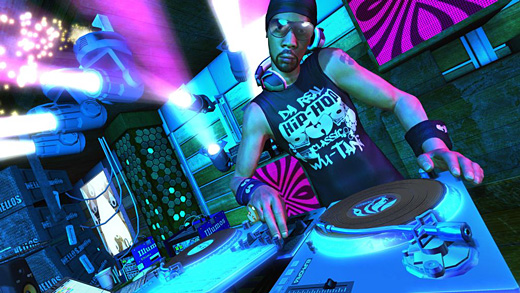 HIGH Nailing the effect taps on any of the Axel F mixes.

If a game evokes an emotion from you, then it has done its job. If it evokes a positive emotion or a sense of excitement, then it has surpassed its job. Few games can both challenge the player while forcing an eye-toothed grin onto a player's face. Settling down to play DJ Hero 2

, I never thought that a rhythm game would ever create that spark within me—but it did.

Players who've experienced the first game (which judging by sales figures, were few and far between) will likely have been impressed by the finger tapping, crossfading genius created in such an original title. For those who haven't played it, shame on you. What DJ Hero 2 does, is take everything that made the original so good, and make it better.

The principles of the game haven't changed at all. Players still have to mix two tracks together by crossfading the music from each and adding sound effects and scratches, like a real DJ. This is done by moving a switch left or right, tapping the red button or holding the green or blue button and moving the turntable back and forth, respectively. With this iteration, all of the aforementioned can still be performed. However, these actions have been brilliantly elevated by adding a freestyle technique. What this means is that players can create music how they want, rather than everyone being forced down the same glowing pathways.

For example, freestyle crossfading tracks can be mixed at their own rhythm. When it works after cutting lyrics in unusual places or being placed in time with the opposing beat, I felt as if I really was in control of the music. The same can be said for the freestyle scratching. A standard scratch path creates a sound fitting for each track. The freestyle path reacted to my movements—I'd move slowly and a low pitched drawl sounded, while moving swiftly gave a high-pitched squealing scratch echoing from my speakers. When I timed it right, freestyling made me feel like a rhythm genius.

While the freestyle tapping doesn't have the same wow factor, it's still a welcome addition. Rather than just tapping the red button to add effects when the path says to, players can tap at their own pace at specific times. Done correctly, it adds a depth to the mix. Most people know the synth sample from the opening of "Push It" by Salt-N-Pepa. During the mix, timing the freestyle taps right will replicate the synth sample in perfect rhythm. 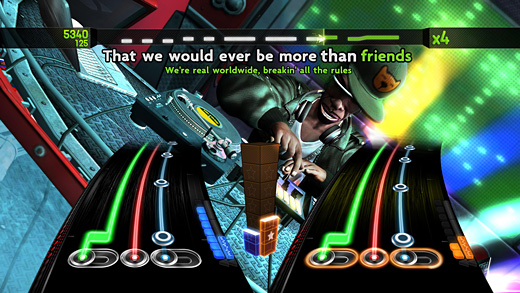 Rhythm games were originally intended to give the player a sense of skill and talent for a vocation that they may not try in the "real world." When real guitarists and DJs pull off a face shredding riff or a seamless mix, I imagine they feel a sense of accomplishment and pride. DJ Hero 2 manages to deliver this feeling to the player in every song by balancing the difficulty wonderfully.

Playing on medium, the game is easy enough to boost confidence but holds onto enough of the difficulty to push the player into trying harder and landing critical points in the freestyle sections. Moving up in the difficulties, of course, rewards more smiles as players learn to hit harder scratches and faster crossfades.

A standout feature besides the actual mechanics of mixing has to be the battles between the player and other DJs. These involve both sides mixing the same tracks, but trying to "outmix" the other's freestyle attempts. It's an invigorating game mode and battling the likes of DJ Qbert is staggeringly wonderful as the mix gets passed back and forth, accompanied by sound effects that bait the opponent on. As the pace quickens and fingers land with the right timing, it's nothing short of perfection. If players get tired of mixing against the AI, there are options to venture out into the online world and take on other plastic DJs around the planet.

Thankfully, for a game with a need for such perfect timing, there's no online latency whatsoever. Games are easily found, and if it seems thrilling to better the AI with perfect mixing, beating someone sitting on the other side of the world is utterly uplifting.

Try as I might, I struggled to find any downsides to DJ Hero 2. The only possible negative the average gamer might encounter would be the track list, as it obviously won't appeal to everyone. Obviously, the majority of the music revolves around the dance and Hip Hop scene. However, considering the title of the game, such a selection is to be expected.

Even if the tunes aren't all things to all players, that shouldn't hold anyone back from putting cash down and picking up one of the most original games to grace consoles for some time. DJ Hero 2

is sublime. If it suffers the same lack of sales the first game did, it'll be a crying shame. Rating: 10 out of 10.

Disclosures: This game was obtained via retail store and was reviewed on PlayStation 3. Approximately 15 hours were devoted to the single player modes, and 3 hours were spent in multiplayer modes.

Parents: According to the ESRB, this game contains lyrics and mild suggestive themes. This game is very child-friendly as there is no violence and even naughty lyrics are overdubbed with sound effects to hide said naughtiness.

Deaf or Hard of Hearing: Since this game utterly hinges on music, it's entirely unplayable to deaf players.

i like the first one so far. the tracks are actually not always exactly my music taste but i have more the feeling of actually playing the track which i never had in gh3. There were just too much tones and on medium level, which was my limit, you play actually not enough notes to feel like playing the guitar you hear. I might get DJH 2 afterwards. Trying to be a Rockstar frustrated sometimes but being a Star DJ is fine enough.^^ And for guitar/rock stuff and all other genres (!) i recently bought Rhytm Zone on Steam. There… Read more »

I can’t help but be surprised at the superlative response to this game. I wasn’t thinking anything about it, but now you’ve gone and started a nagging in my brain that I’m missing out on a true hidden treasure of a game.

I love Guitar Hero 1 and 2, and I thought once Rock Band came out, things started getting flooded and too difficult to enjoy.

Perhaps DJ Hero 2 is the precise change of pace I’d need in a music/rhythm game. And it doesn’t take up as much space, I suppose, as Rock Band.