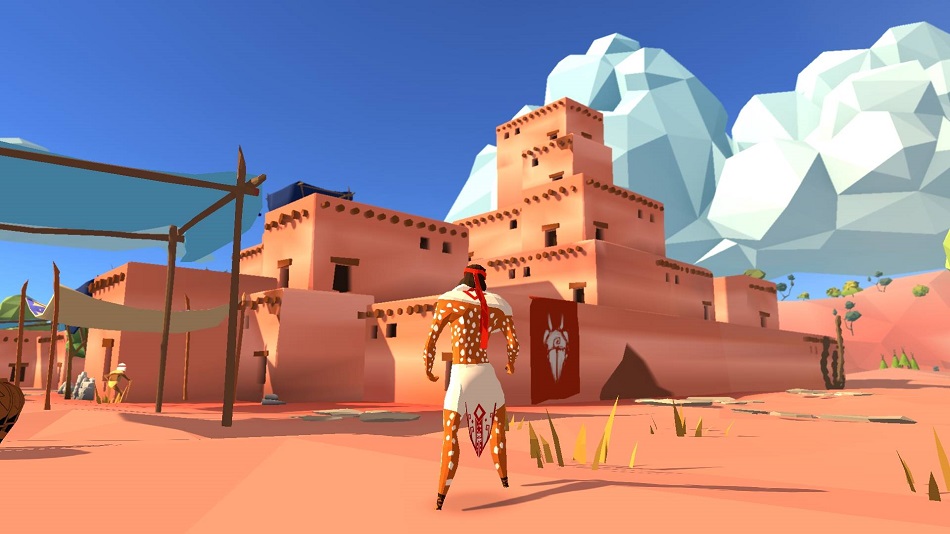 Mulaka has a certain aesthetic that makes it incredibly appealing – it has a vibe that Disney would love. The colorful visuals that mix styles from many cultures and legends are gorgeous, and the look is reminiscent of the period when cel-shaded graphics took the industry by storm. It’s almost a cartoon come to life.

It’s important for me to start with the visuals in this case, because the developers want players to fall for the world they’ve created. The action is competent, the story is a little trite, but what will garner love are Mulaka‘s looks and animation.

Mechanically, Mulaka is a third-person action game broken down into small levels within a psuedo-open world. A map shows the scope of what can be explored, but each area has a boundary defining each part as a separate level. Story-wise, Mulaka is based on Mexican folklore — the titular character is a shaman, seeking the blessings of demigods in order to protect the land from war.

Crucial to any action title, the feeling of controlling the main character is nailed — he feels so fluid. Holding the sprint button causes him to flail around like a muppet in the most amusing way before hitting jump or attack and finishing the dash with a wonderful flourishing impact. Getting this aspect is integral to action, and Mulaka nails the aspects that will urge players on. However, in other areas, the game falls a little flat from a lack of balancing.

An example of this is throwing the spear weapon — it requires the player to stop moving and hold the left shoulder button while aiming with the right stick. It’s clumsy because the battles are often frenetic, with a myriad of enemies swarming from all directions. When the game later introduces a flying creature that must be taken out of the air with spears, it halts any flow and usually results in taking damage and missing the target. 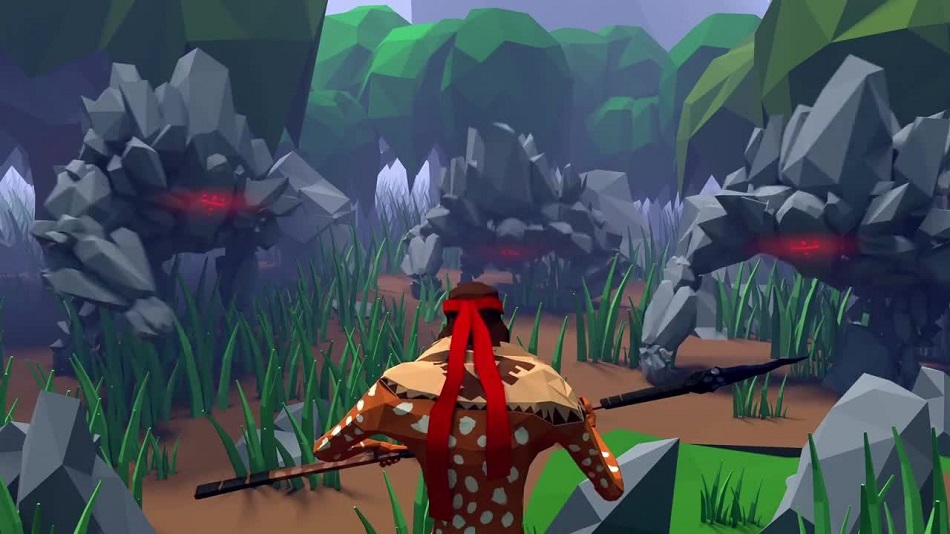 There’s also a problem with healing. Health potions are bountiful since plants can be harvested to create them, but they take a long time to consume. Pressing up on the D-Pad to drink one forces a dancing animation that’s initially rather sweet, but not ideal when faced with enemies that never relent. Much like using the spear, trying to heal often results in taking damage, negating the intended restorative effect.

When not fighting, there’s a lovely world to explore. Sweeping vistas of sand dunes are common, decorated by bones and outcroppings of rocks. Native villagers are often found wandering around, and for a desert world, everything feels populated and alive. Walls built from haphazard stonework hide secrets that can only be uncovered when new abilities crop up, and there’s often an excuse to backtrack and find upgrades for the character. Most of these are minimal and boost stats such as speed, or the radius in which collectibles are picked up.

Despite all of the lovely sights and the originality within the plot and the setting, the levels themselves are a little repetitive. Most require finding three stones of power that unlock an exit leading to a boss, which once defeated, leads to a new level. Admittedly, the boss fights are impressive and varied, which is entirely welcome and tests both skill and thinking outside of the box — One boss is shielded with rocky armor, requiring Mulaka to juggle attacks and capitalize on any weaknesses. Take the armor off of the legs and go in for the kill? Or use brute force to attack the head through the armor?

However, the repetition in Mulaka’s core loop is ultimately what brought it grinding to a halt for me. While I was enjoying the combat – aside from silly deaths due to the spear, or because I couldn’t heal fast enough – the experience devolves into simply running around each area looking for fights. The villagers could have been used to add more personality to the story, and Mulaka’s abilities could have gone beyond the standard tropes in action titles – throwing bombs to break down walls is decades old now. The entertainment in fighting waves of creatures to open a door that leads to more creatures can only last so long.

Mulaka is a treat for the eyes that’s just fine as it is, but I can’t help but feel there were many opportunities where it could have, and should have, done more. Rating: 7 out of 10

Disclosures: This game was developed and published by Lienzo. It was played on the Switch, and the code was supplied by the publisher. Approximately 10 hours were devoted to the single player and the game was completed. There are no multiplayer options. The game is also available for PC, PS4 and XBO.

Parents: According to the ESRB the game is rated T. The game features Blood and Violence, but it’s never overly gory or gratuitous. There are no instances of swearing or sex.

Deaf and Hard of Hearing: There are full subtitles for all speech and no sound cues are used within the action or exploration. It’s fully accessible.

Remappable Controls: Other than changing the sensitivity of the axes, the controls are not remappable.

Colorblind Mode: There are no colorblind modes.