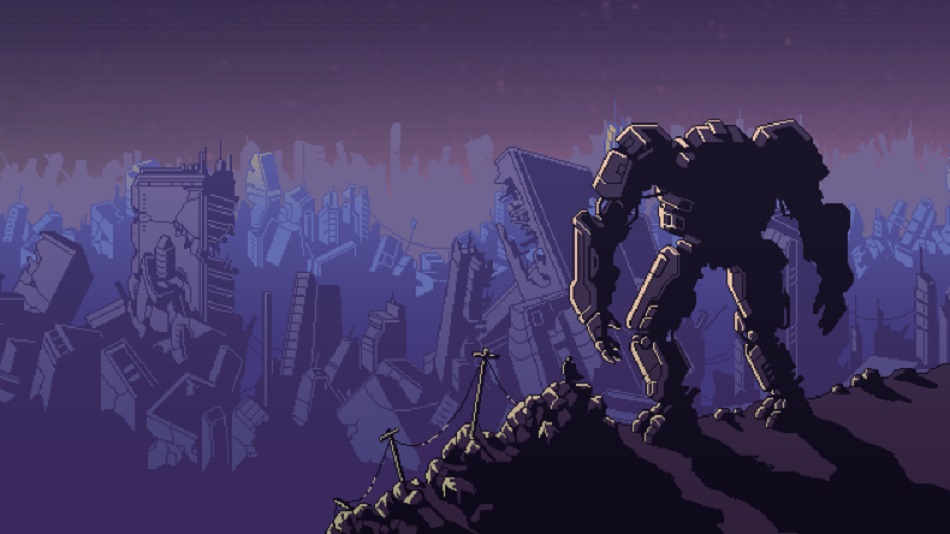 LOW Nothing awarded for finishing the game on higher difficulties.

WTF Why no co-op mode?

Fans of mech action, strategic gameplay, roguelikes, or of the indie hit FTL are in for a treat. Into the Breach is the next title coming from Subset Games, and just like their last one, it’s a winner.

In this new entry, the player controls a squad of three mechs on gridlike maps, protecting cities and infrastructure from the insectlike Vek. Each turn-based mission starts by placing units. After which, the player and the Vek take turns making moves. There’s a turn counter in the corner of the screen showing the order of moves, and holding the CTRL key while hovering the cursor over an enemy will list their skills and abilities. All of the integral information is on display here – nothing is hidden or tucked away in submenus.

The starting squad of mechs allows for easy learning of the basics. A walker mech is able to punch Vek, damaging them and pushing them into the tile behind them. Artillery mechs hold back and fire rockets from range. A direct hit deals damage, but splash damage can be used to shove them into traps, water, lava, or off of the map completely. Lastly, there’s a ramming mech which launches itself at the Vek. Like the others, it deals damage and can move enemies, but it also damages itself. Repairing the mechs is as easy as pressing the R key, but it will use up a turn.

Of course, the mechs can be upgraded over the course of the campaign. Health, damage and movement can be boosted. New weapon systems unlock. However, progress is not guaranteed since this is a roguelike and upgrades are reset upon death. Also, combining certain randomly-found weapons can give a squad incredible power, and finding these combinations can often be the key to winning the game. But, if bad luck rears its head, it’s possible for a whole campaign to flash by without getting one. The average playthrough can take around an hour on easy, but bump up the difficulty and that will extend. 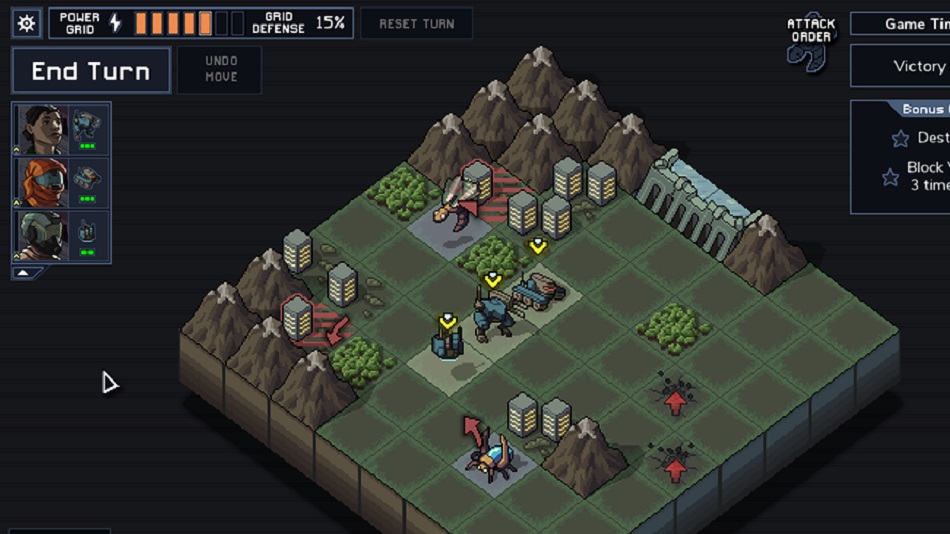 An interesting design choice here is that unlocking achievements rewards the player with coins, which are then used to unlock more squads. This can be a little frustrating if certain achievements seem out of reach, but they generally come fast enough to allow for new experiences. Each new squad has its own new powers and its own set of achievements, so experimenting with them adds to the metagame, and progress with Into the Breach tumbles forward like a row of nudged dominoes.

In terms of systems, there’s so much to talk about — the depth of design and the features within are impressive. I don’t want to get too far into the weeds for the purposes of this review, but certain things stand out like getting a once-per-battle reset option if a critical mistake has been made, or experimenting with the perks that unlockable pilots add to mechs. There are also options to use a squad built from random mechs, or to build a squad using any three mechs already unlocked. Whether the player wins or loses, Into The Breach will allow one pilot to be “pulled out of the timeline” and rolled over to the next game.

Those who’ve payed FTL will know that it was about keeping track of everything and staying sharp. Breach requires players to think ahead and take longer to ponder their movements and attacks — it really is chesslike. Examples of the tactics needed can be seen in the importance of monitoring the turn order, moving enemies into the paths of others so they attack each other, or in taking advantage of the environmental effects to add extra damage.

I do, however, have one gripe, and it’s an odd one. I started out playing on Easy in order to come to grips with the game and to explore as much as I could. Playing on Easy allows achievements to be unlocked, and I never felt the need to bump the difficulty up. I then completed it on Normal and unlocked Hard, but I discovered that nothing was locked behind higher difficulties — this could be seen as a good thing for players who hate to be gated away from content,  but keeping one or two squads or pilots behind the harder modes would have encouraged me to push further, and to learn even more of the game’s minutiae.

While that may be a bit of an odd complaint, it really is the only issue I had with Into The Breach. Those hankering for something reminiscent of Advance Wars or Valkyria Chronicles will find much to enjoy, and players looking to challenge their grey matter should absolutely give it a try. Rating: 9 out of 10

Disclosures: This game was developed and published by Subset Games. It was played on PC with a code provided by the publisher. 45 hours were dedicated to the game and it was completed multiple times. There are no multiplayer modes.

Parents: At the time of writing, there seemed to be no ESRB rating available. However, there’s only minimal cartoon violence throughout.

Deaf and Hard of Hearing: Subtitles are included throughout and there are no audio cues within battles that could be missed. This game is fully accessible.

Remappable Controls: Being a PC game, most of the controls can be adapted and the entire game can also be played with just the mouse.

Colorblind Mode: There is a colorblind mode included.