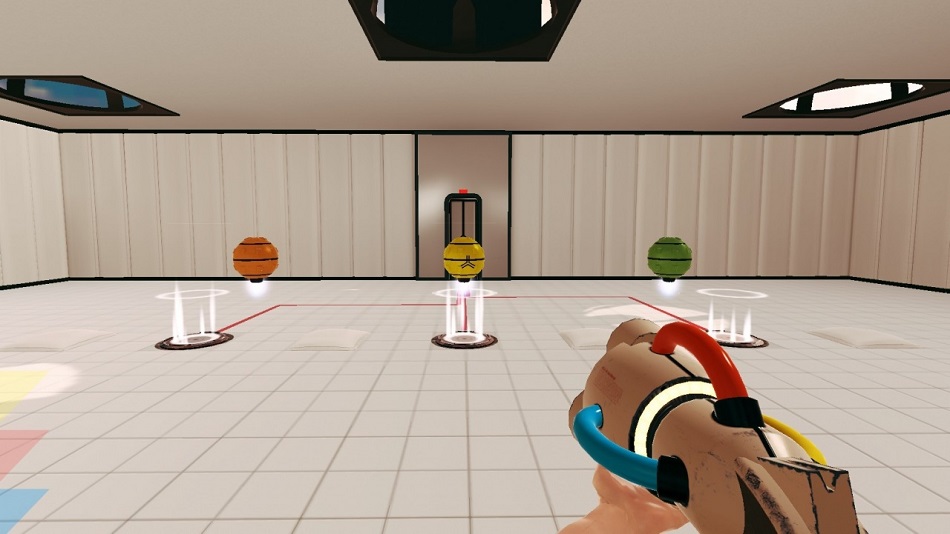 There, now that I’ve got that out of my system, let’s try to talk about Chromagun without using any of those words because there are obvious comparisons, and a lot of similarities to be found. Just how similar does it feel?

Players control a nameless protagonist who appears to be inside a building filled with puzzles that can kill. Its walls are a sterile white, which erodes over time to show wear and tear on the facility. The premise is simple — get out of this science building under the guise of testing the equipment and following orders that a bodiless voice instructs. The voice drops small jokes rooted in sarcasm. Posters around the facility are lighthearted and allow for some environmental storytelling. The player has also a bulbous gun that paints surfaces instead of wormholes, handily switching between red, blue, and yellow.

It’s hard to ignore the commonalities, and when viewed in the company of Portal, it will forever fall short. However, once that aspect is put aside, Chromagun isn’t bad at all. 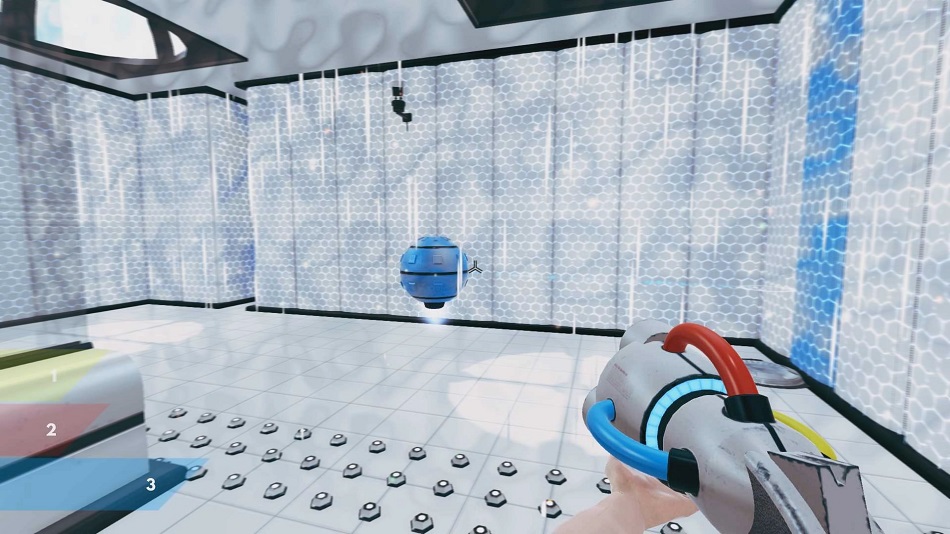 In order to get out of each room, a floating ball droid must be guided to a sensor in the floor which then opens a door to the next test. The key to this is that the droid must be painted with a color, as should the walls next to the sensor. This will keep the robot in place, as if it was holding the door open politely.

Of course this is a puzzle game, so the boundaries are always moving. For instance, sometimes the colors will need mixing into secondary hues. Occasionally the droids can be painted, but sometimes they can’t and they get awfully angry when shot. Positioning the protagonist inside sensors can also open doors — there were moments when I had to shoot a color outside of a room and dash to the sensor, freeing a droid who was otherwise stuck behind a locked door.

Chromagun always asks for new thinking, and juggling these, erm… balls, is an interesting concept. Painting walls and forcing the droids to follow paths is incredibly satisfying, and rarely does an environmental puzzler make me smile, but watching the droids slot into place and reveal my exit often left me grinning. I was a puppetmaster, guiding these mindless drones from place to place.

Admittedly, much of my pride in puppeteering comes from simply not dying. Playing on the Switch, Chromagun only saves at the start of each level. “Dying” will cause a restart, meaning retreading of steps. Thankfully, death only comes in a couple of forms – being zapped repeatedly by droids or walking over electrified floor panels. Some variation would have been oddly welcome, but the experience is more about placement, rather than player movement.  It’s a fair penalty when the answer hasn’t been found, but it can feel a little annoying if it’s due to a mis-pressed button when panicked, and losing ten minutes of work is a real pain.

Chromagun has obviously been influenced by other titles, but it’s got a lot of charm and the puzzle designs are always interesting. The difficulty curve is gentle as well, in large part because the developers have scattered the tough ones evenly throughout. The lack of constant barriers keeps the game playably fresh, and my attention stayed sharp. It’s all very competent, which should be taken as a positive, because in light of the competition it’s all that can be hoped for. Rating: 7 out of 10

Disclosures: This game was developed and published by Pixel Maniacs. It was played on the Switch with a code provided by the publisher, both docked and in handheld mode. Approximately 6 hours were dedicated to the campaign and the game was completed. There is no multiplayer mode. The game is also available on PS4, XBO and PC.

Parents: According to the ESRB the game is rated T. There are very minor instances of violence, and there aren’t any uses of strong language, it’s more environmental damage causing the player to black out.

Deaf and Hard of Hearing: There are full subtitles throughout the game and no sound cues are needed for the puzzles to be solved. It’s fully accessible.

Remappable Controls: Controls cannot be remapped, but there are several modifiable options available.

Colorblind Mode: This game does rely on differentiating colors, and there are colorblind modes available.