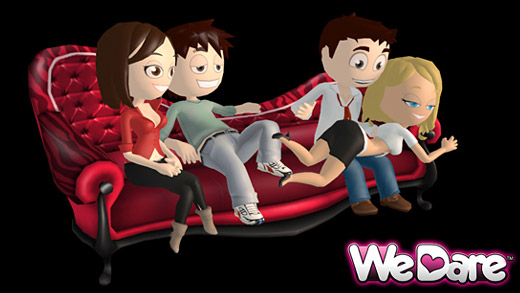 The title of this post should give you the gist of the backlash Ubisoft has been facing in its European-only Wii (and PlayStation 3) title We Dare. It seems everyone is ignoring the fact that We Dare will also be available for the PlayStation 3 and is outraged that the family-friendly Wii is home to such a game.

Here is the issue. We Dare is a party game. It has silly mini-games that encourage players to get off their couches to jump around and look silly for minutes at a time. Unlike other party games that traditionally grace the motion-controlled consoles, this particular game also encourages players to rub up against each other, spank one another and, well, strip.

Ubisoft's own marketing material says We Dare has

and to play, you will

"Use your controller in the most unexpected ways, as you've never imagined before… wave it around to the beat of your favorite tunes, old and new… sometimes co-operative hugging helps, and it certainly doesn't hurt. Enjoy the unique game play designed for the use of the Wii-mote or the Move controller exclusively made for We Dare. And there's more! You can also use your Wii Balance Board for additional game play based on pure mass… are you the lightest one in the group? Perhaps shedding some clothes will even the playing field… it'll definitely make the party more interesting!"

Obviously, Ubisoft knew what it was doing when it greenlit both the game and its marketing. It can't be pretend to be caught unaware.

What's makes matters worse is that in Europe, We Dare is rated for gamers 12 and up (PEGI 12+). Content such as this would have drawn the ire of conservative family groups and reactionary parents anyway, but having such a rating was probably too much.

This has led to quotes from irate parents saying, "I have a 13-year-old daughter and if I knew she was playing such a highly charged sexual game with boys, I would be appalled. It is encouraging under-age sex. The video pretty much shows them swapping partners, girl-on-girl kissing. That kind of thing is not something that young teenagers should be exposed to. Nintendo Wii's are family consoles popular among children and youngsters. This is totally inappropriate."

The United Kingdom's Leicester East MP Keith Vaz added to the conversation with "The new We Dare game has clearly been wrongly marked as a 12 plus. As a family friendly console, Wii must ensure that there are proper checks and a full consultation before games are graded for use by children. This game should not be released until these checks are made."

So there you have it. Honestly, if We Dare getting that kind of publicity across the pond, there is little chance of it coming out here—assuming we even wanted a game like this out here.

UK has on of the highest teen pregnancy rates in the EU. Or maybe even the highest? Thus a game that could potentially lead to minors touching (oops!) each other (oops!) has to be accompanied with an outcry. In the rest of Europe the response is more moderate. Here in the Netherlands it’s only in the gaming press and only because of the outcry it causes in the UK. Sex is the favorite recreational activity of the Dutch (apart from watching football and drinking beer). Thus this won’t cause much of a stir. Even in Germany, a country notorious for… Read more »

Sexual content is less enflameing as violence here in the “putting bullets in the bile and pass it around” US.

Not releasing it the US is also not surprising a shame too.

Why dose everyone what to make mundane things surprising? LOL