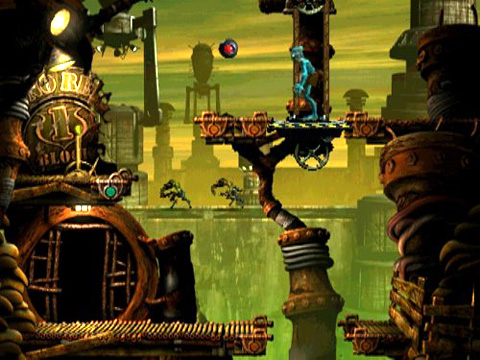 It isn't difficult to see why. The Oddworld games were 2D and possessed very strong sound design. The game characters spoke (more or less) and just about everything (most on screen objects) in the game emitted a sound a player could differentiate. This combination creates a playing environment open to blind player. Even so, there is a process that Garrett must go through to play the game:

After finding out they are either 2D scrollers or 3D worlds I first have a sighted person describe the menus to me, so I can get the game started on my own. Then I go to the internet and seek a walkthrough (especially for 3d games). If it becomes to difficult, I will also watch walk through videos on YouTube.

However, I did not need a walk through or video walk through for Abe. When I start playing I track sound landmarks (foot steps, objects, sound of running or pushing against walls). After this, I start exploring to see what does what. Always looking for land mark sounds to get my orientation down (sound of water, sound of footsteps changing from grass to dirt).

Finally, I have a great sense of the minds eye. Once I know what is in an area and how they are laid out, I can make a real time picture of what is going on in front of me just through sound. even in 3D. If this is hard to picture I know, I can't explain it better than that.

Reading about it is one thing, but witness his playthrough of Oddworld: Abe's Exoddus on the PlayStation to see what kind of a feat this is.