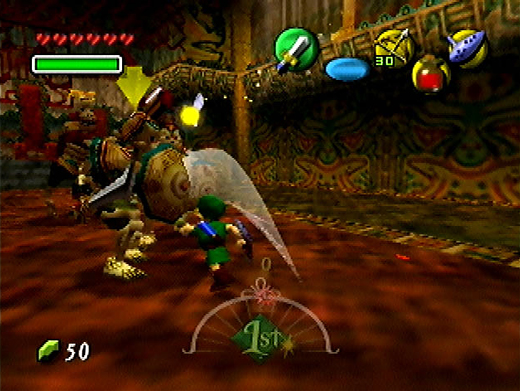 Playing The Legend of Zelda: Majora's Mask is like returning home after a long time away. It's wonderful to take in all the old familiar sights and sounds. It's nice to see the familiar faces of those I became close to while there; their familiar mannerisms and comforting (though barely intelligible) vocalizations. Before I can get settled in, I stumble across a new epic quest—one of the utmost urgency that will occupy my time here and leave me little time to enjoy my stay. As it turns out, that is just fine because whatever time I do have here is time well spent.

For the most part, Majora's Mask stays the course first charted by last year's Ocarina of Time. The control system is identical to the original. Considering how perfect that original set up was (right down to the revolutionary Z-targeting system), I can only see it making the transition untouched as a plus. I have to admit that the control scheme did take some getting used to (it still lacks a jump button), but it quickly becomes second nature and is relegated to an afterthought while playing. The graphics and sounds in Ocarina of Time were probably the best I'll ever find on the Nintendo 64, but by taking advantage of the Expansion Pak, Nintendo succeeded in setting Majora's Mask apart from its predecessor.

Expansive vistas that would have been hidden by blankets of fog and mist in Ocarina of Time now stretch far into the distance. I was taken aback a couple of times when I would stand Link at a particular vantage point and actually be able to see the land extend out in front of me while displaying everything in sight. Speaking of which, the Expansion Pak allows for many more objects—as well as enemies—to be onscreen this time around. To aid the visuals, Nintendo tries its hand at special effects like motion-blur and particle effects for the first time, but it was the augmentations to the game's environments that work the best. Textures are much more varied, and the character models appear smoother and animate more naturally. Environmental effects like multiple light-sources are employed to drape all of Majora's Mask's environments in all shades of moody color, casting foreboding shadows on everything in sight. This, along with the addition of a decidedly somber selection of background music, gives the game a darker tone than Ocarina of Time, but it is works to perfection in this alternate universe.

Perhaps some developers at Nintendo of Japan had always wanted to create a darker game and saw this release—previously a simple add-on of the late DD64—as a chance to do just that. Whatever the reason, it is clear that Majora's Mask was not meant to be a simple rehash of Ocarina of Time. The story begins somewhat lightheartedly, with a young Link being ambushed by a malicious mask-wearing Skull Kid in the forest. During the ensuing struggle, he loses his trusted steed, Epona, and is left with no course but to follow the thief into the deep, dark forest. This isn't the most pressing of reasons to dive into a new adventure, but it quickly escalates into an engaging mission to save the world. The true power of the Mask of Majora is quickly revealed, and Link must do all he can to stop the imminent destruction of the land aptly named, Termina, by a falling moon. 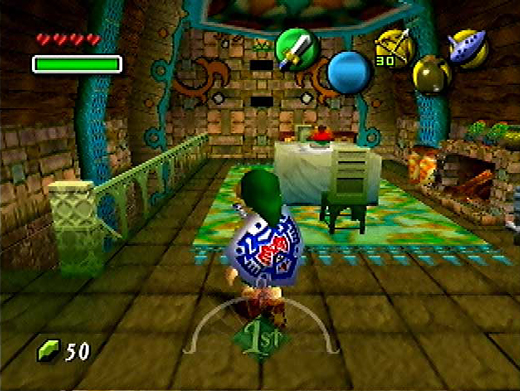 Once a simple diversion in Ocarina of Time, mask collecting has been upgraded to a key aspect of Majora's Mask's gameplay. Much of the game is spent in pursuit of masks—some completely new, some familiar—needed to get around in Termina and progress through the game. For the uninitiated, when Link adorns a mask, he acquires new abilities. If, for instance, he wears a Zora mask, he then becomes a Zora and has the ability to swim at great depths; if he wears a Deku mask, he is essentially powerless, but he can use the Deku plants strewn about Termina to catapult himself high into the air—most likely to find hidden objects. Other masks, like the Bunny Hood simply enhance Link's speed. This is a great means to add variety to the gameplay, and it is far more fun than it was in the Ocarina of Time.

What ultimately sets Majora's Mask apart from its predecessor is the deliberately heightened sense of tension that permeates the game. This tension is accomplished by the new time limit that Nintendo now imposes on players. From the moment Link first sets out on his adventure to the moment the game ends, it is a race against the clock—a clock that sits at the bottom of the screen ceaselessly counting down the days, hours and minutes until the end of the world. What's worse is that the allotted time is a scant 72 hours (three days) in game time, and roughly an hour in real-time. This is not enough time with which to beat an RPG of the scale of Majora's Mask, but Nintendo does offer some leeway. By using Link's trusty Ocarina, I could change the flow of time, but the catch is that all progress and inventory up until that point would be lost, and I'd have to restart the mission or whatever dungeon I was in at the time.

And that is where Majora's Mask begins to take on a life of its own. Success in the game is dictated by a player's ability to complete the game, including its mini-games and side quests, within the aforementioned confines. Adding further to the complications, some tasks are specifically designed to consume the entire three-day period so a mistake forces players to restart from the first day. If you're not careful, you'll find yourself going through parts of the game many times before finally meeting all the conditions needed to proceed. The result is a game with an ever-increasing pace that doesn't afford the player much time to stray or else he or she will find themselves on the receiving end of a celestial collision. But as challenging an experience as this element of the game can be by itself, it is magnified by Nintendo's decision to do away with Ocarina of Time's save system. Instead of being able to save game progress at will, it can now only be done at prearranged save points in the game. There is a stopgap option where you can save at special owl statues scattered across the land. But these statues are few and far between and only serve as temporary backups. Once you start from one of these save points, you start in the same place and with the same amount of time left on the clock. If there is a flaw in this game, this is it.

In the end, Majora's Mask fights valiantly to get away from its add-on roots and for the most part is successful. However, the game's new features have not been perfected and the frantic pace can feel unbalanced—no doubt a factor due to Miyamoto's lack of involvement. Despite these problems, Majora's Mask is a wonderful place to visit. There is much to see and do, as long as you realize there isn't much time to do it in. Rating: 9.0 out of 10.

According to ESRB, this game contains: animated violence

Parents won't find anything objectionable in this game—okay maybe that scantily clad Great Fairy—but other than that it is good fun for all ages.

If you loved The Legend of Zelda: Ocarina of Time then Majora's Mask is a worthy sequel. It won't bowl anyone over the way Ocarina of Time did, but it is still one of the best RPGs ever made.

Nintendo 64 fans have few alternatives for their RPG fix, as Ogre's Battle 64 is the only other Nintendo 64 RPG on store shelves.

PlayStation owners should give Majora's Mask a try once they are done with Final Fantasy IX.

Dreamcast owners should do the same once they are done with Skies of Arcadia.