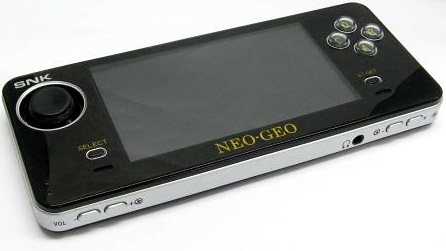 SNK has not confirmed as of yet whether there really is such a thing as a Neo Geo Portable Device so please treat this as rumor.

Now that we've gotten that out of the way, wouldn't it be great? I mean, I have little intention of buying another handheld, and especially not one who's biggest selling point is that it plays Neo Geo games. Still, wouldn't it be cool to have a machine build around these old franchises? What if they are straight ports of the 24-Bit Neo Geo games we all remember and not the underwhelming 16-bit Super Nintendo and Sega Genesis ports we've been subjected to up until now.

Even better, with all the smart phone and tablet "taking over the gaming world" talk pundits have been engaging in the last couple of years, isn't it great to see a former hardware maker like SNK decide now is the perfect time to jump back into the hardware business. And on top of that it is doing so with a slick piece of alleged hardware that centers around its own library of games.

Dubbed the Neo Geo Portable Device by whomever is leaking or making up this story, the system does have decent sounding specs. It sports a 4.3 inch screen, 2GB of internal storage, an SD card slot, a headphone jack and an A/V out jack. It will also come pre-loaded with 20 Neo Geo titles. Naturally there is no sign of Windjammers on this list—but you know it is coming—but there are classics like Nam-1975, Fatal Fury Special, Magical Lord, Metal Slug and Samurai Shodown to make the initial investment a bit easier to swallow.

There is no word on what kind of processor will be powering this machine. How many bits will the processor be? 24-Bit? 32-Bit? 64-Bit? 128-Bit? 256-Bit? Does it really matter? Yes!—this is a Neo Geo machine after all, it seems only natural that we talk in bits. In all seriousness, it would have to be at least on par with the Nintendo 3DS or the Sony PlayStation Vita to be taken seriously. But there is plenty of time for that. Until then enjoy the screenshots and that trip down memory lane this story probably evoked. 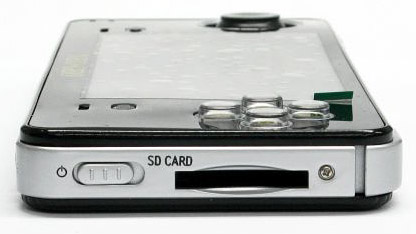 Two things that make me suspicious:

1, The Neo*Geo logo doesn’t match the original. Compare the bottom right of the G to the logo on old Neo Geos: it’s a different font. Also, compare the kerning.
Of course, companies update the type & design of their logos all the time, but these seem like the kind of small differences a fake would have.

2, In the Kotaku story, the text above the button on the left below the analog pad reads “MENU”, not “SELECT” as in the pic above. Again, doesn’t prove anything, but…

Glad to see someone else showing Windjammers some love. It was a lot of fun and was one of the more underrated Neo Geo arcade games. Along with King of Fighter 94 and Fatal Fury I was tempted to buy a used Neo Geo just to play one of these games. That was a long time ago though. And even today I think Neo Geo consoles and games are still costly. Maybe its the collectability factor. But to be honest more than half of these games built into the Neo Geo Pocket 2 or whatever it would be called, would… Read more »

Talks about bringing back the memories. If SNK would have released or at least announced this thing a year ago i would have seriously considered it. I was and still am a huge fighting game fan and Art of Fighting, Fatal Fury, The King of Fighters, Samurai Shodown and World Heroes. That would have gotten me really excited, especially if it also played mobile games and some third-party stuff. Now that Vita is getting all of the fighting game franchises like Street Fighter X Tekken and all that, I think I’ll just stick to that and wait for a SNK… Read more »