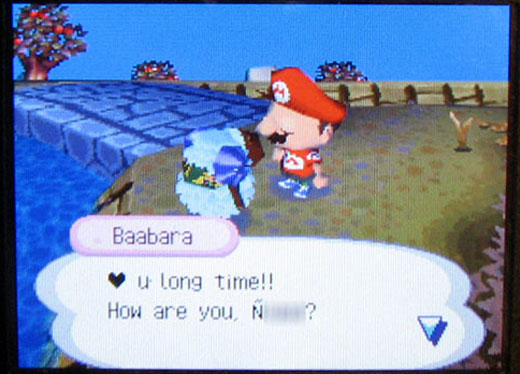 In all fairness to Nintendo, the offensive word isn't likely to make it into consumers hands as the DS cards with said offensive material was only sent out to a select group of the media. Plus, restrictions built into the Animal Crossing games and Nintendo hardware would limit something from spreading to individuals who did not want to openly share in this.

But that doesn't make this story any less newsworthy. For a day or so, it tarnishes Nintendo's calculated family-friendly image.

Nintendo has of course apologized:

"Previously played copies of the 2005 DS game Animal Crossing: Wild World were sent to 14 members of the media to demonstrate the ability of players to transfer items to the new Animal Crossing: City Folk for Wii. We regret that an offensive phrase was included without our knowledge via a wireless function that allows user-generated catchphrases to spread virally from one game to the next. This version is limited to 14 copies created for media review purposes only and is not available at retailers. We sincerely apologize for the incident and are working with media who received the game cards to return them to Nintendo immediately."

who this game is made for? is it for the single bored women they show in the commercials playing this game? I’m sorry to be so harsh it’s only an opinion but this seems like a waste.

I Hyped Animal Crossing on Everhype and gave it 60% which I think is fairly accurate.