It takes national tragedies for the government of Finland to A) notice a game where you kill a bunch of kindergarten students and B) take action against it. That means that for a long while no one knew of this game or found it offensive enough to take action. I don't know what is worst.

An Internet game in which players roam a school and kill kindergarten students with a shotgun has been pulled from a Finnish children's gaming site one week after the country's worst school shooting.

"We have removed pages from our site that are not necessarily appropriate for younger family members," lastenpelit.fi said in a statement on its Web site.

The game, "Kindergarten Killer," can be found widely on the Web.

Matti Saari, 22, last week killed 10 people at a vocational school in Kauhajoki, Finland, in the country's second school shooting in less than a year. Saari prefaced his rampage with boastful video clips on Web sites such as YouTube.

Finnish student Pekka-Eric Auvinen did the same before shooting six fellow students, the school nurse and the principal to death at Jokela high school last November. 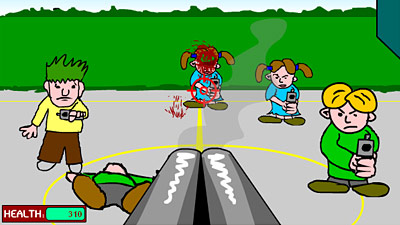