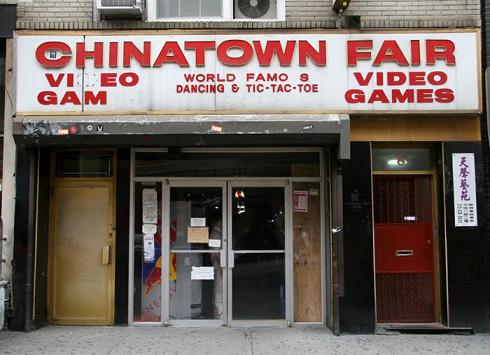 I must have at some point. During high school, it felt like Chi, some friends and I must have hit every arcade on the island of Manhattan. So we must have made it through the doors of Chinatown Fair.

News of its impending closing hit Twitter today. (Not many people saw it coming, in fact there was a nice piece written about it by someone who just discovered it existed.)

Apparently, it's lease runs out on February 23rd (Wednesday) and the owner seems to lack the funds to renew. That really is a shame, because A) I thought all arcade spots in New York were gone and B) most news posts about its closing proclaim it to be one of the last great arcade gaming spots, not just in New York, but in the country.

This news comes soon after the announcement that California's Arcade Infinity is also closing its doors.

Arcades like this one were the place to go for more than simply playing some Street Fighter or Ms. Pac-Man. They encouraged the gathering of even the most anti-social nerds, hipsters, thugs, casual and hardcore players and even the occasional female. Here they could just blow off steam or test their skills against other players.

That's why its so sad to hear a place like Chinatown Fair is closing. Places like this don't exist in the real world anymore.

(Update 02/22/11) Joystiq is reporting that all may not be lost after all for Chinatown Fair. The owner, Samuel Palmer, is still in negotiations with the landlord over a new lease. If things can not be worked out, Palmer might be considering relocating to Williamsburg, Brooklyn. But that is only if nothing can be worked out. All current plans include staying at that location and being there for a long time.

This is harsh. My five years in New York were constantly punctuated by Chinatown Fair. Whenever I had to walk through Chinatown, I’d always hit the end of Mott Street to see what was going on. While I was never into the fighting games, I loved just walking in the doors there. ( They used to have pinball a few years ago… ) This is all too bad. Bad for all arcades, and bad for New York – that place is becoming less unique each year. Favorite games there were Monopoly Pinball, Metal Slug Whatever, and Buster Brothers. Pour one… Read more »