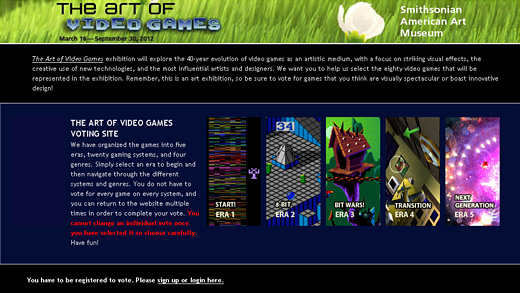 Are videogames art? Many in the industry have been asking that question for a while and it has spawned many a debate. Those who believe they are in fact art, point to games featured in a museum or gallery exhibit as a sign that they are and that people outside the industry are viewing them as such.

Though still relatively rare, museum exhibits featuring games have been popping up more frequently these last few years. And some aren't relegated to the wing of some obscure art gallery located off the beaten path.

Take this latest exhibit, hosted by The Smithsonian American Art Museum and expected to run from March 16 – September 30, 2012.

Dubbed The Art of Video Games exhibition, it will "explore the 40-year evolution of videogames as an artistic medium, with a focus on striking visual effects, the creative use of new technologies, and the most influential artists and designers."

Along with classic video game hardware and huge prints of screenshots, gracing the walls, The Art of Video Games will also have video interviews with respected and pioneering developers like God of War originator David Jaffe. There will also be opportunities to play some of the games from the various videogame eras.

The curator of the exhibit, Chris Melissinos, the founder of the Past Pixels, worked with the museum and an advisory group consisting of designers, developers, industry pioneers and journalists.

Except that you CAN vote for Limbo at their voting site….

I always wind up disappointed by these “exhibits”. They are small and focus on mass market games like Final Fantasy VII and ignore risk takers like Limbo.