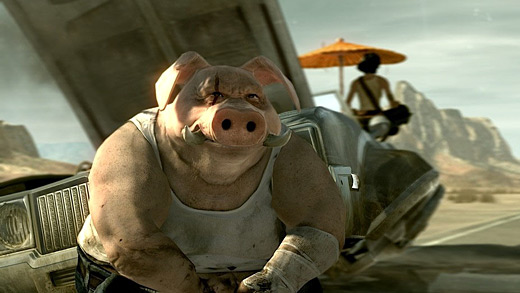 You didn't really think Ubisoft was going to make a sequel to Beyond Good & Evil did you?

IndustryGamers: It's always a bit risky for a publisher to push out a new IP, not knowing how the market will react to it. Luckily for Ubisoft, Assassin's Creed did well so now it's a franchise…

Laurent Detoc: Yes, that worked out, but it doesn't work out every time, and sometimes you come back to an IP that didn't work because you still think it could have – like Beyond Good and Evil, which was leaked, so now people know we're working on a new one. Whether or not it comes out remains to be seen anyway, but we didn't want to abandon that IP because it has a cache and authenticity about it. There's something very pure about that game and it's too bad that we were not able to build it as an IP at the time.

IG: Most publishers make decisions based on sales, so what made Ubisoft decide to pursue Beyond Good and Evil again?

LD: Well, I didn't say there's definitely going to be another game. I said something had leaked, which means we've been working on some Beyond Good and Evil stuff, but whether there's going to be another game or not, that's something for the future. But getting to your question as to why there's work on the IP again, it's a creative people business; the creative talent is interested in it and possibly exploring how to do it from a new angle.

IG: So regarding that leaked Beyond Good and Evil trailer, when things like that happen, people sometimes suspect that it's a deliberate leak as a way to do some viral marketing for the product.

LD: For this, that was definitely not the case. I'll tell you, I didn't know about the leak and neither did my boss. The problem when you do stuff like [intentional leaks] is if you get caught it's really bad. Looking back at our history, I don't remember anything we've done of that nature.

To be perfectly honest I would prefer they didn’t make a sequel anyway. Ubi-Soft’s from isn’t the best, and I seriously can’t see them making a worthy sequel to the excellent BG&E; it’ll more likely be stripped down, nerfed, dumbed down, nerfed some more, laced with multi-player, nerfed, littered with posters for Prince of Persia, advertising competitions so you can sleep with Frag Dolls, nerfed some more.

No thanks. Leave BG&E where it is and it’ll remain in high regard forever.

Also, Ubisoft have actually advertised jobs for working with Michal Ancel on the sequel to Beyond Good & Evil (in those words) at their Montpellier studio. There’s definitely a long way to go from there to it actually becoming a reality, but “we’ve been working on some Beyond Good and Evil stuff” basically means a game is currently in development. It’s not some kind of CGI movie hint, I mean. (Thank God!)