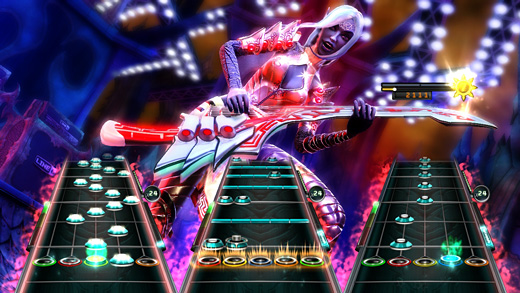 Remember RedOctane? I sure do. It went from making game controllers (and renting games!) to releasing an $80 peripheral with a game called Guitar Hero. I thought it was nuts for doing this. But almost six years later it looks like one of the greatest videogame risks and success stories (after the Nintendo Wii).

Guitar Hero shouldn't have been a success. Eighty dollars is hardly chump-change, but like the $250 Wii, consumers overlooked the exorbitant price for the opportunity to rock out to their favorite musical hits. That it wasn't a real guitar didn't matter. That you weren't so much playing music as mimicking music playing didn't matter. It didn't take much more than picking up the guitar, popping in the game disc to turn yourself into a, ahem, guitar hero.

Thought dead since the days of PaRappa the Rapper and Space Channel 5,  there was now new hope and expectations for the musical game genre. Red Octane got bought up by Activision, Harmonix was bought up by MTV Games/Viacom and went on to create Guitar Hero's rival, Rockband.Everyone thought they could ride this rhythm-gaming gravy train forever.

Then problems popped up. It probably seemed really simple to the rest of us. Release a piece of hardware, then release software that can only be played on that hardware. That was how console manufacturers traditionally made their money and it looked like it could be done with Guitar Hero as well. But then they (Activision) got greedy and lost sight of just who the market for Guitar Hero was. Out came new guitars and full price software when one standard controller and budget-priced releases or downloadable content would have made more sense. Activision also lost sight of who the market was.

It also succumbed to stiff competition, ironically enough, from the game developed by the same guys that created Guitar Hero. With the help of Electronic Arts, Harmonix brought Rockband to the masses and essentially turned things up a notch. Guitar Hero and Rockband really did a great job of one-upping each other. Unfortunately, for Guitar Hero, it lost out. Sales tumbled and its final sequel, Guitar Hero 5: Warriors of Rock was the poorest selling in franchise's history.

That was enough for Activision, a company that doesn't seem to like anything in its portfolio that isn't a multi-million-seller. Guitar Hero is now no more and no more content, downloadable or otherwise, is expected to be released in the foreseeable future.

In a nutshell, I am sorry to see the franchise go. I am sorry to see at end to any videogame franchise that reinvigorates a genre and brings it to mass market. The bright side is that Harmonix will still be around as will many of the developers who have made the likes of Dance Dance Revolution, PaRappa the Rapper, Rez, Vib-Ribbon and Taiko: Drum Master. Guitar Hero in its present form may be over, but it could be back for an encore appearance somewhere down the line.

I don’t think you’re giving enough credit to Rockband for what happened to Guitar Hero. Rockband was the next step that Guitar Hero refused to take. Rockband let you and your friends or family become a real live rockband. Guitar Hero looked out of date and less appealing after that.