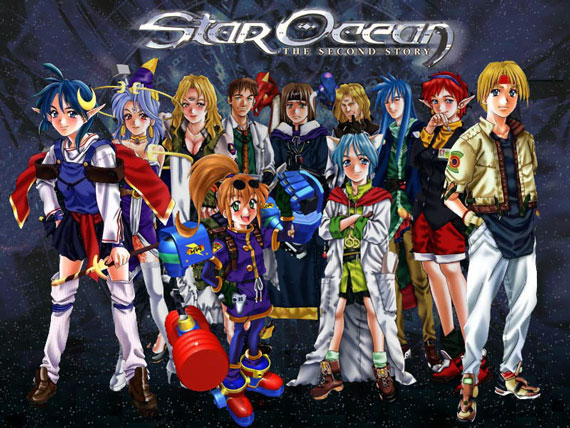 When it came to role-playing games (RPGs), there was Square, there was Enix, and then there was everyone else. Nowadays, however, Konami, Capcom, and Sony are entering the fray with competent RPGs that seem to improve with each consecutive release. Square apparently had taken notice and decided to blow them all away with Final Fantasy VII. Enix, on the other hand, is still sitting on its hands. I figured Star Ocean was supposed to hold us over until the latest Dragon Quest epic was completed, but after playing Star Ocean, I have to say they'd better come up with a new plan.

It begins with a pre-rendered 3D intro that's beautifully done but looks generic. It's overly flashy and lacks personality. In fact, it doesn't even feel like it's part of the game. It seemed to be there by default and results in Star Ocean faltering right out of the gate. Another immediate blunder was deciding to go with simple 2D sprite characters to interact with high quality 3D pre-rendered backgrounds. For all the effort on the backgrounds, the game just comes off looking dated. The sprites were done at a low resolution and animate horribly. As with most everything else in the game, the sprites look out of place and only further confuses the look and feel of the game making this 32-bit entry look more like a 16-bit relic.

Any supposedly dramatic interaction between the characters comes off as unemotional. There is never a sense of tension as the story progresses. The developers try to drum up emotions incorporating sad music and sappy dialogue, but it's all so cheesy that all I could feel was nothing. All of these cliches were embodied through the two lead characters. The main lead, Claude, is an adopted son trying to live up to his father's reputation (how many times have you heard that before); the other lead, Rena, is of course a rebellious girl with a mysterious past (Terra from Final Fantasy III). Will they end up saving the world? Do we have to guess whether they will fall in love? All of the answers are as predictable as the plot. No matter what angle they try to twist or what arc they try to turn, everything feels forced and contrived.

To their credit, they did try to innovate by offering the player a chance to play the game from one of the two main characters' perspective. It was a twist I looked forward to, but I was disappointed by the execution. Playing as Claude was pretty uneventful and downright predictable, but playing as Rena is simply a nightmare. Rena is a secondary character so no matter what I did, the action still revolved around the boy. It's unforgivable that I had to sit around and wait for the boy to rescue me or wait for the boy to do his thing while I milled around killing time. Their stories are identical and vary little from each other. It's just no fun to use that option so it would have been better left out and had the attention transferred over to the story.

They should also be commended for their variation on the battle mode. It removes the standard line mode of most RPGs, where my characters are set in position on screen and I'm left to choose the their actions through a menu. In Star Ocean, I'm given a targeting system that allows the player to roam the battlefield and control the character in a real time battle. I can choose which enemy to attack and then chase it down and kill it. However I can't control more than one character at a time but I can switch to different characters if I choose to, which adds a lot of strategy and freedom to the confrontations. As a personal peeve, this new option would have been sweetened even more if there had been an addition of a mutli-player option to take advantage of all the action onscreen, but it's really not a major issue.

In the end, Star Ocean shows that you can't go back to the past. The industry, for better or worse, is moving towards full-motion video and elaborate pre-rendered backgrounds as a minimum in cutting-edge RPGs. Star Ocean delivers in that department but then it leaves out the most crucial element: a compelling story. The story is predictable and unimaginative and little is done to move the story forward any faster than at a snail's pace. The game is subpar with a few good points, but none of which are really strong enough to warrant a look. This game could have been so much more but it simply isn't. Rating: 3.0 out of 10

What the hell kind of review is this? a 3.0?!! If the game is so bad how come there are sequels still coming out for it? I don’t know anyone that hates this game as much as your stupid website. Every other website gives it good reviews.

Hi there Not Sure, I’m a huge fan of JRPG’s myself, and while I really enjoyed Star Ocean: Second Story, I wouldn’t say it’s one of the best games that _I’ve_ ever played. The story was decent; the music and atmosphere were great; and the “clunky” feel to the game gave it some charm. (Some of the localization was rough, from what I remember; and the item creation system felt clumsy and experimental to use.) I enjoyed fine-tuning my characters in battle as well. That said, the game fell flat for me on the second disc. The plot seemed to… Read more »

Absolutely absurd review…this game is HANDS DOWN one of the best games I’ve ever played on any console. You have no idea what makes a great game, obviously. The fact that you focused on graphics so much in your review shows what a biased tool you are (so how much free merchandise did Square give you for this review? Hypothetical question, I know you weren’t endorsed but it’s simply to prove my point). Some of–no, make that MOST of the best games in history have been sprite-based, and Square has only had its hands in a small portion of them.… Read more »